Yesterday, American political activist and pundit Steve Bannon gave a talk at an Orbán-government sponsored event, the Visegrád group’s “Future of Europe” conference. Interestingly, just a few right-wing and pro-Fidesz media outlets were allowed in to report on the day’s proceedings, supposedly due to “lack of space” in the event hall.

Steve Bannon, former White House Chief Strategist and CEO of Donald Trump’s campaign, and co-founder of the far-right site Breitbart News, delivered a speech entitled “Trump’s America First and its impact on Central Europe” on Wednesday in Budapest. You can view the talk in its entirety below:

Nor is Bannon the only Trump supporter to be invited to Hungary recently. In addition, tech mogul Peter Thiel (known both for his high-profile support for Trump and his funding of a lawsuit that ultimately destroyed tabloid gossip site Gawker), will be in Hungary to attend Brain Bar in Budapest.

And, as we have previously reported, controversial alt-right pundit Milo Yiannopoulous is also in Budapest; he was invited by a foundation linked to the Orbán government, and will be giving a talk on “Hopes and Threats in the 21st Century.”

Yiannopoulos himself had been a writer at Breitbart, but was forced to resign following a series of controversial comments regarding child sexual abuse. In addition, in response to the same scandal, Simon & Schuster cancelled its plans to publish his autobiography.

Interestingly, this is not event the first time this year that Yiannopoulos was invited to speak in the Hungarian capital; in January, he was invited by pro-Fidesz historian Mária Schmidt’s foundation to open a conference on “The Future of Europe” in Budapest. That invitation was later rescinded amid domestic and international criticism. In addition, some news outlets reported that right-wing voters were divided over the invitation, and Fidesz leaders did not want to risk such confrontations in the middle of the campaign. In addition, some prominent Fidesz figures, such as Gergely Gulyás (now head of the PMO), were publicly opposed to Milo’s invitation.

In spite of his earlier opposition, however, it was none other than Gulyás who opened the yesterday’s event with Steve Bannon. In his speech, the Fidesz politician described Donald Trump’s historical role by claiming:

It would be early to draw conclusions about Donald Trump’s presidency, but his undeniable historic merit has been to prevent Hillary Clinton from becoming president.

At the beginning of his talk, Bannon recalled Viktor Orbán’s statements on the preservation of security and Christian identity and then, in connection with Trump’s success, claimed that “the backbone of American society is the working class who needed a leader who would restore the former glory of the USA.” He also said that the price of the financial crisis was paid by working people instead of the “corrupt, greedy and incompetent elite,” and that, against Clinton, Trump campaigned with economic nationalism.

At the beginning of his speech, Bannon asked a hypothetical question: “Does the West Have the Power to Survive?” He followed this question by praising Viktor Orban’ s migration politics, and expressing his views about so-called “global elites”, who he claims have attacked “Christian culture.”

Bannon started to work for Trump’s campaign 2016, and after the election received a position as White House as a Chief Strategist to Donald Trump; however, he quickly lost his position and influence by fighting with other interest groups around the president. In addition, he was forced out of his leading role at Breitbart news. With the decline of his American career, it seems that the far-right ideologue has shifted his main focus to Europe. He is regularly invited to European far-right events and even Wang Qishan, Vice President of the People’s Republic of China, wanted to hear more on his views, despite Bannon’s anti-Chinese rhetoric in recent years.

Steve Bannon is the former boss of Sebastian Gorka, the national security expert of Hungarian origin who also had a brief, controversial stint in the Trump White House.

It should also be noted that yesterday’s speech was far from the first time that Bannon had expressed his admiration for Orbán; in an interview with the BBC where he also claimed, among other things, that “Martin Luther King would be proud of Trump,” the Hollywood-executive turned far-right firebrand defended the Hungarian Premier’s comments about defending a “Christian Europe” and about not wanting  “to be multi-coloured by being mixed … with others.” Bannon claimed that

I think Viktor Orbán is a patriot of Hungary, and I think the people of Hungary have to decide that…when [he] says something about protecting the Judeo-Christian West, okay, I don’t think that’s the end of the world.

You can view his comments in full below: 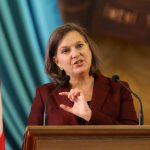