A Hungarian diplomat in Bangkok who tested positive for Covid-19 had caught it from Foreign Minister Péter Szijjártó, local public health institute, the Department of Disease Control (DDC) confirmed. The Foreign Ministry refutes the claims, saying that since Szijjártó tested negative right before his trip no one can rightly say he infected others.

DDC said that it was clear the Hungarian diplomat was infected by Szijjártó, Cambodian news site Khmer Times reports. The diplomat had been in close contact with the Hungarian minister, having sat in a car and having lunch with Szijjártó.

Szijjárto visited Cambodia at the beginning of November and tested positive for Covid-19 upon his arrival to Thailand.

After authorities learned about the Hungarian Foreign Minister’s positive test, all those who had been in close contact with him were ordered to be tested.

The Hungarian diplomat’s test came back positive on Monday, although 17 other people who had been in contact with him tested negative.

Related article
FM Szijjártó on Testing Positive: 'I don't wish this situation to anyone'

All Cambodian officials produced negative coronavirus tests a day after meeting the Hungarian delegation led by Foreign Minister Péter Szijjártó, who later tested positive for the virus, local media reported on Thursday. However, several of them entered voluntary quarantine after the visit. According to Szijjártó, Thai authorities agreed on his return to Hungary and he […]Continue reading

Thailand was not the only country where the Foreign Minister’s visit caused difficulties. Following Szijjártó’s positive test, Cambodia also took immediate action- the country has locked down schools, bars, and cinemas in the capital, Phnom Penh, and a surrounding province, while Cambodia’s prime minister, Hun Sen, has gone into quarantine.

So far, 1,166 people have been tested for COVID-19 in Cambodia after the minister’s visit, with 1,140 negative and 23 pending tests. Two senior Cambodian officials and Csaba Őry, the Hungarian Ambassador to Cambodia and Vietnam were diagnosed with the virus.

On Wednesday afternoon, Tamás Menczer, state secretary at the Foreign Ministry, responded to the news on social media. In a Facebook  post he wrote:

Coronavirus: New Favipiravir Delivery from China to Arrive Next Week 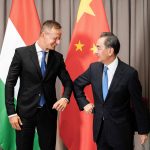 Coronavirus: New Favipiravir Delivery from China to Arrive Next Week