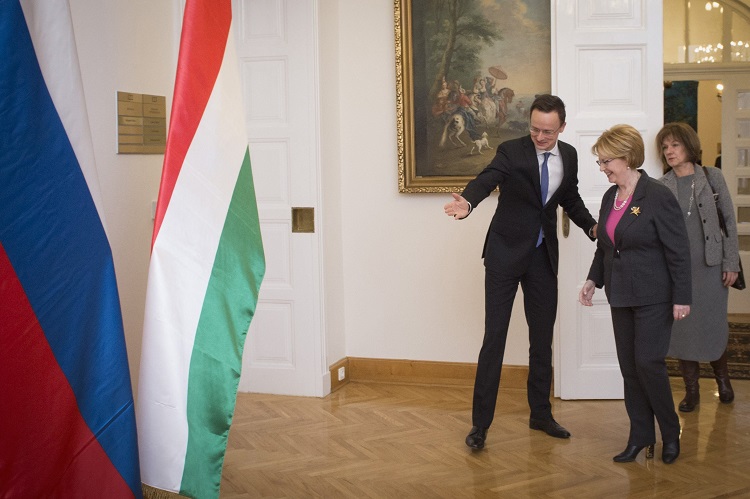 For the first time in many years, the international political environment is favourable for developing Hungarian-Russian relations, Foreign Minister Péter Szijjártó said on the eve of Russian President Vladimir Putin’s visit to Budapest.

Over the past few years Hungary was frequently criticised by the West for maintaining pragmatic relations with Russia but now the West is also trying to develop such ties, he said after talks with Russian Health Minister Veronika Skvortsova (pictured above). During Putin’s visit, energy issues, education, heavy industry, pharmaceuticals and farm investment projects will be discussed, he said. Szijjártó said that under a contract signed in 2014, all issues concerning long-term gas purchases were finalised so the forthcoming talks can focus on the post-2021 period. He called Russia Hungary’s most reliable energy supplier.

Péter Szijjártó also said Hungary is ready to start upgrading the Paks nuclear power station as soon as the final EU licence has been granted. He said that since the introduction of sanctions, Hungary has lost 6.7 billion dollars in unrealised export. Szijjártó said Ukraine’s territorial integrity and sovereignty are beyond question and everybody must respect international treaties and regulations. The sanctions, however, have failed to help implement the Minsk agreement.

The government is unable to protect Hungary from “Russia, the coloniser”, green opposition LMP said in connection with Putin’s visit, criticizing PM Viktor Orbán on Szabadság Square near parliament at a Soviet war memorial. Party-leader Bernadett Szél said LMP was working for a renewing Hungary in which there is no longer room for either a Soviet heroes’ memorial or leaders who “qualify for dictators or pocket dictators”. Orbán is governing against the people when he is developing ever closer ties with Russia and his “Putindependence” costs a lot to the country, she added.

Co-leader Ákos Hadházy said only the means of colonisation have changed over the years and Russia is now using energy and finances to make Hungary dependent. Russia wants to export a system in which NGOs, media outlets, opposition forces and human rights can only survive with the consent of the country’s leaders, he added. Board member Péter Ungár said the expansion of Russia’s influence was previously thought to belong to the past but it is now again gaining ground. It is shocking that the Hungarian government is ready to “dishonour Hungarian history” in order to help Orbán and his closest supporters gain “assumed or real economic benefits”, he said.

Former Socialist PM: “Putin’s visit is a threat to Hungary”

He who allies with Russian President Vladimir Putin betrays rather than protects Hungary’s interests, opposition Democratic Coalition leader Ferenc Gyurcsány, Hungary Socialist Prime Minister between 2004 and 2009, said on the eve of Putin’s visit. When Prime Minister Viktor Orbán welcomes Putin, a “man who has changed from a cautious seeker of democracy to a despot”, he violates all of Hungary’s interests, Gyurcsány said, adding that the Russian president’s forthcoming visit would pose a threat to the country.

Commenting on the recently inaugurated US president, he said that instead of representing the virtues of freedom, respect and openness, Donald Trump stands for the opposite. Gyurcsány said he was shocked to see an “alliance taking shape” between Putin and Trump which goes contrary to freedom and Orbán is trying to become an ally to both presidents.