Building closer ties with Southeast Asia has a “great potential” for Hungarian businesses, Foreign Minister Péter Szijjártó said after talks with his Philippines counterpart in Budapest on Friday.

At the talks, Szijjártó voiced Hungary’s solidarity with the Philippines over a recent terrorist attack by the Islamic State organisation on a Catholic church.

Lochin thanked Hungary for its assistance to Christian communities and advocating protection for those communities in the United Nations. 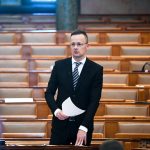