The Football Team of Tomorrow: Hungary Defeats France in U-17 Euro Cup 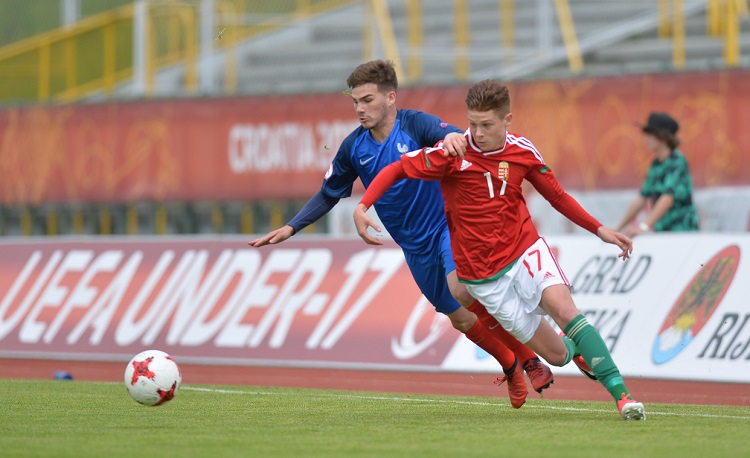 In its first trip to the final tournament since 2006, the Hungarian Under 17 Team has had a tremendous start in the UEFA Under-17 Championship with a victory over France yesterday.

The Hungarian side prevailed 3-2 over France, with two goals scored by Kevin Csoboth.

The match, held in the Croatian city of Velika Gorica, began promisingly for the French, with Amine Gouiri drawing first blood in the 36th minute. Csoboth quickly responded with a goal of his own just one minute later with a shot into the bottom-left corner.

A second goal by Csoboth in the 41st minute brought his team into the lead, which rose again in the second half when Márk Bence scored in the match’s 52nd minute, bringing the Hungarians into a 3-1 lead over the defending U-17 European Champions.

And while Gouiri managed to score yet again during the four-minute added time at the match’s end, it was not enough to overcome the Hungarian lead.

You can view a video summary of Hungary’s victory below:

Hungary is in Group B of the final tournament, alongside France, Scotland, and the Faroe Islands. The top two teams will advance to the next round of the youth Euro Cup.

Hungary’s next game will be on Saturday against Scotland, followed by a match-up with the Faroe Islands next Tuesday. All matches will be held in Croatian, which is playing host to this year’s tournament.

Via mlsz.hu, uefa.com, and index.hu