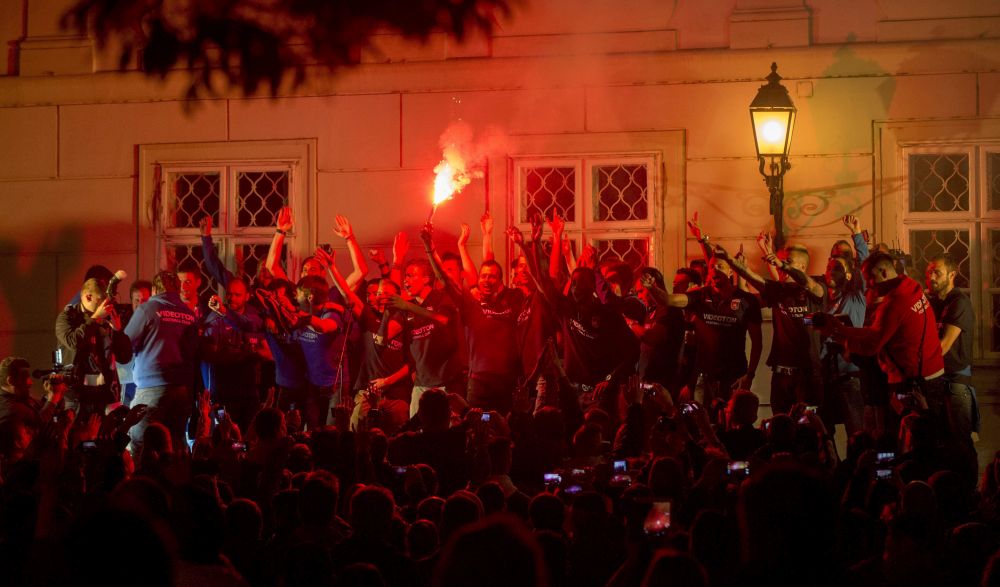 It was a joyful night at the town hall of Székesfehérvár, between Budapest and Lake Balaton, as local soccer players celebrated that the town’s team, Videoton FC Fehérvár, had won the Premier League after triumphing at a final match on Sunday evening.

Scenes of joy followed as footballers emerged from the town hall to be greeted by local soccer fans.

Videoton FC Fehérvár were crowned Hungarian champions for the second time on Sunday after second-placed Ferencváros drew 2-2 at Pecs.

The club, founded in 1941, holds an unassailable 13 points lead with four matches remaining and had taken a huge step towards the title by beating Debrecen 2-1 away on Saturday.

Videoton, who clinched their first title in 2011, had another memorable season in 1984/85 when they reached the UEFA Cup final, losing 3-1 on aggregate to Real Madrid despite winning 1-0 at the Bernabeu.

The club’s Spanish coach Joan Carrillo spoke of his delight to cause joy to “the country’s best fans” and said that the team has been crowned Hungarian champions thanks to hard work and the outstanding community that has come into being at Székesfehérvár, adding that club’s footballers strive to win every time they take to the pitch.

The club’s new HUF 9bn stadium is expected to be finished by late 2016.