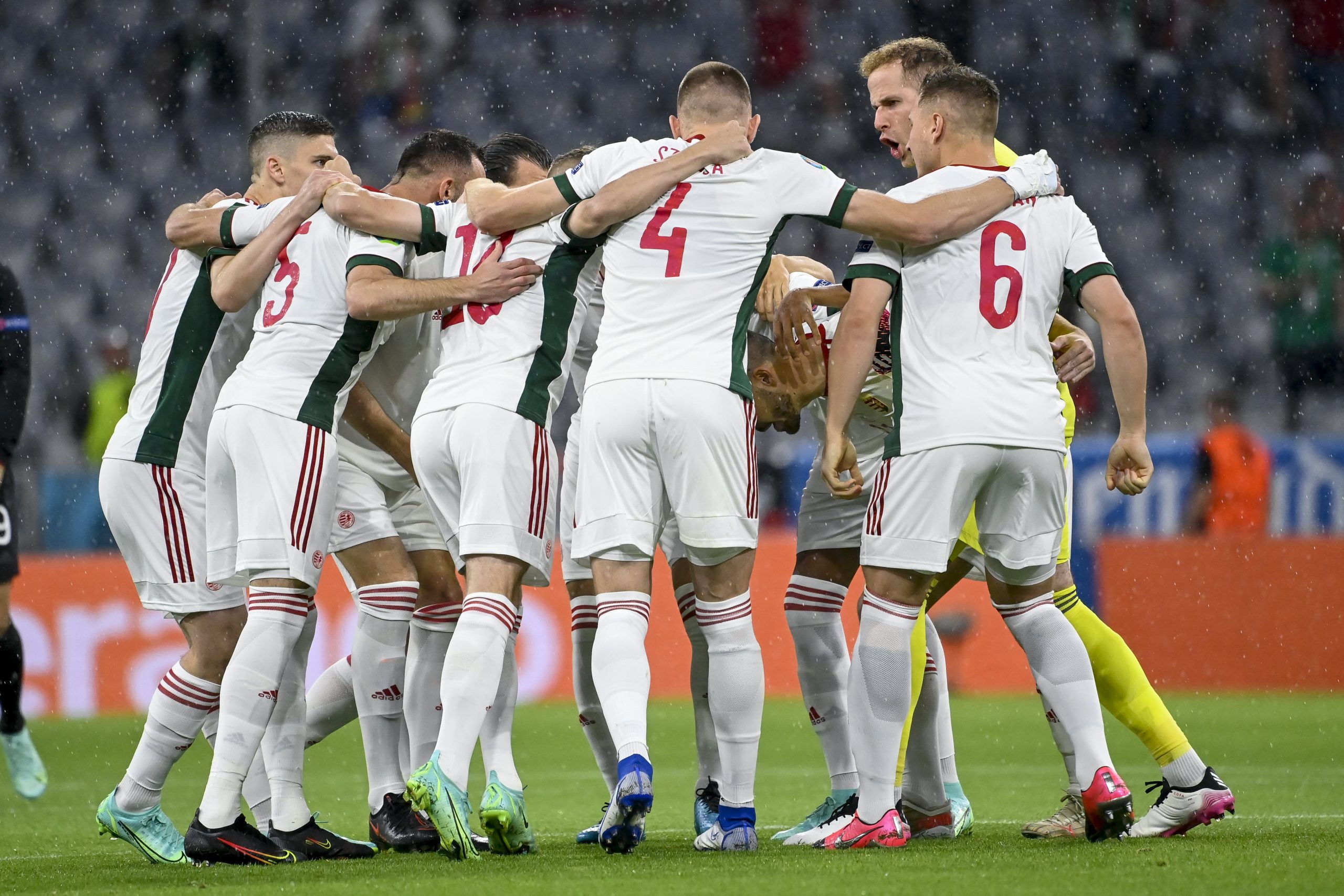 After having led for almost 70 minutes, the Hungarian national team eventually drew with Germany in Munich. Winning “only” one point from the match, Hungary cannot take part in the further parts of the tournament. However, the magnificent performances shown in the EURO definitely provide a base of future optimism for the national team.

To the surprise of many, thanks to the heroic draw against reigning World Champion France, the Hungarian team kept alive its dreams of qualification to the round of 16 in the EURO’s group of death. The National 11’s fate remained in its own hands, as a victory in Munich would have meant certain qualification.

But what can you expect, when you have to beat three-time world champion Germany? And on top of that on German soil?

Despite the odds, the National team was still optimistic before the game and both the coach and players spoke of the possible recipe of success. Well, this certainly wasn’t one of those games where motivation had to be raised.

Germany definitely ruled the tie in modern times. A game played in 2004, the ‘dress rehearsal’ of the Nationalelf before the EURO (which Hungary won 2-0), however, has provided an example that in football anything can happen, really.

While a home game in a full Puskás Aréna certainly doesn’t match one set more than 500 km from the Hungarian border amid a pandemic, the team still enjoyed the fans’ support, as some 2,500 of them eventually took the trip to the Bavarian capital (probably adding to many more who work and/or live in Germany). And since the stadium’s capacity had been reduced to only 20% due to coronavirus restrictions, they could easily make themselves heard throughout the entire game.

Politics have apparently infiltrated the stadium too. During the Hungarian hymn, some scarce whistling could be heard from the German stands, and a man even made it onto the pitch to raise a rainbow flag in front of the players, after some 12 thousand were handed out to supporters attending the game. The hostility against the Hungarians could be felt in the stadium, even though the national team and the fans had nothing to do with the ruling parties’ new legislation. Meanwhile, some of the Hungarian fans took part in the political debate as well, waving a flag saying “LMBT? Nein, danke.” However, even this unfriendly atmosphere was not enough to distract our players. 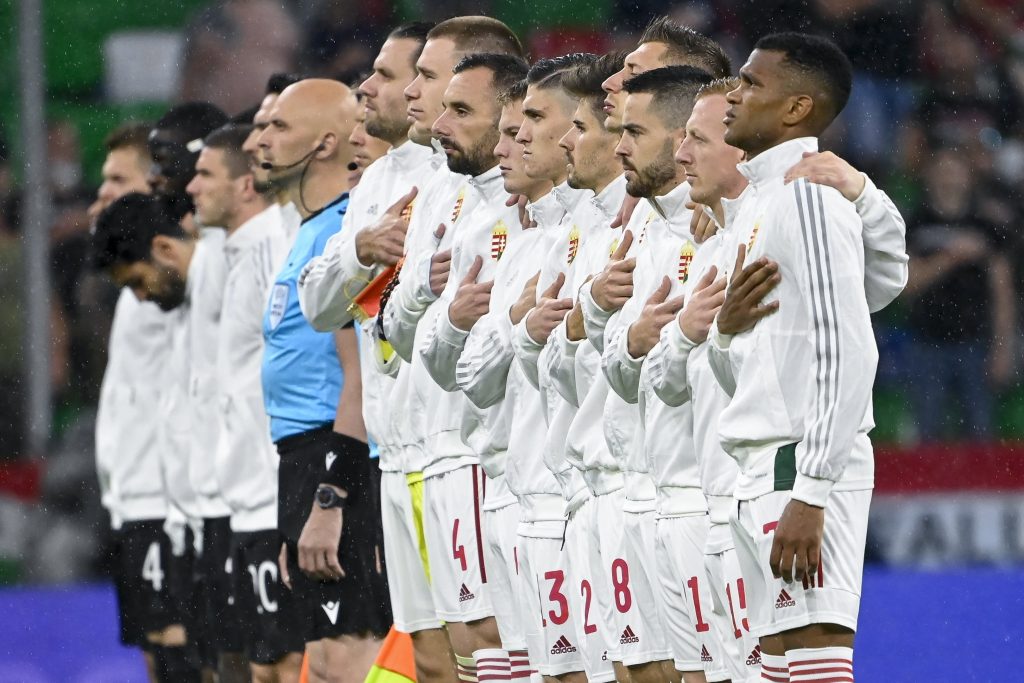 The Hungarian team visibly knew what they came for, and amid a fading German dominance, it soon managed to take the lead with a header by Mainz striker captain Ádám Szalai after a marvelous long past by Roland Sallai. The German team thrived to put pressure on Hungary afterward with wavering success. As goalkeeper Gulácsi and the defenders put out superb performances, the Nationalelf’s attacks resulted in only a few different situations, with Mats Hummels’ heading proved to be the most dangerous one, luckily bouncing off the post. 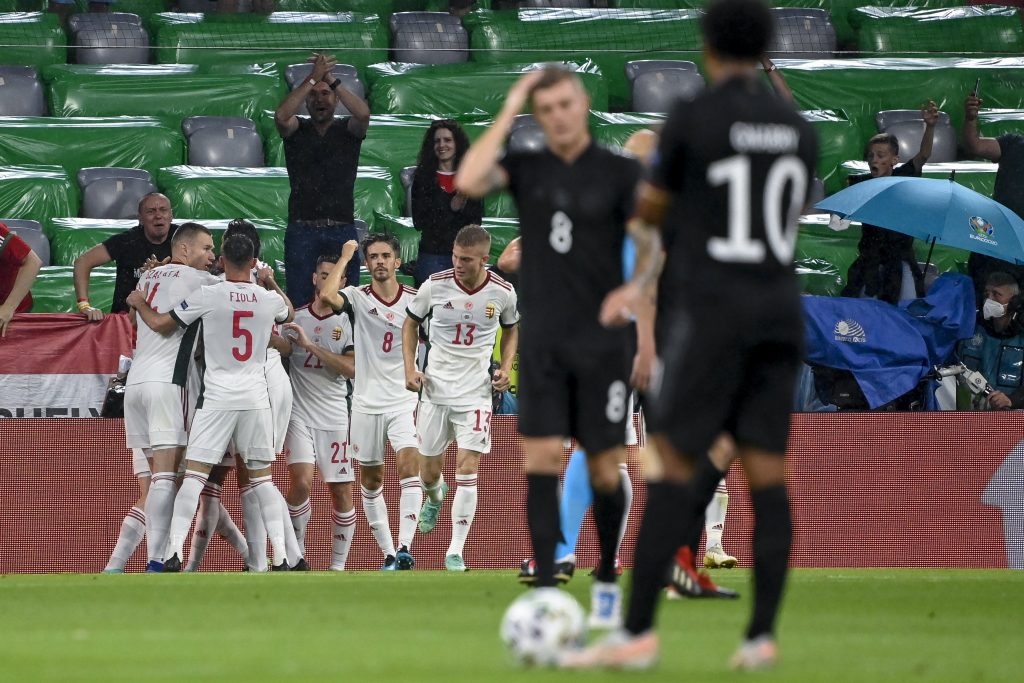 Organization, aggression, and enthusiasm seemed to be paying off, and Hungary had been leading for 55 minutes already, meaning that Germany was at risk of dropping out, when Chelsea’s young talent Kai Havertz managed to equalize after goalkeeper Péter Gulácsi’s mistake and a mess in front of the Hungarian net.

German joy didn’t last too long, however. Right after the restart, young talent András Schäfer scored with an assist from Ádám Szalai, reclaiming the advantage for the visitors and astonishing even the most fanatic fans. German pressure, however, proved to be fruitful at the end, and Leon Goretzka equalized, saving the hosts from shame. 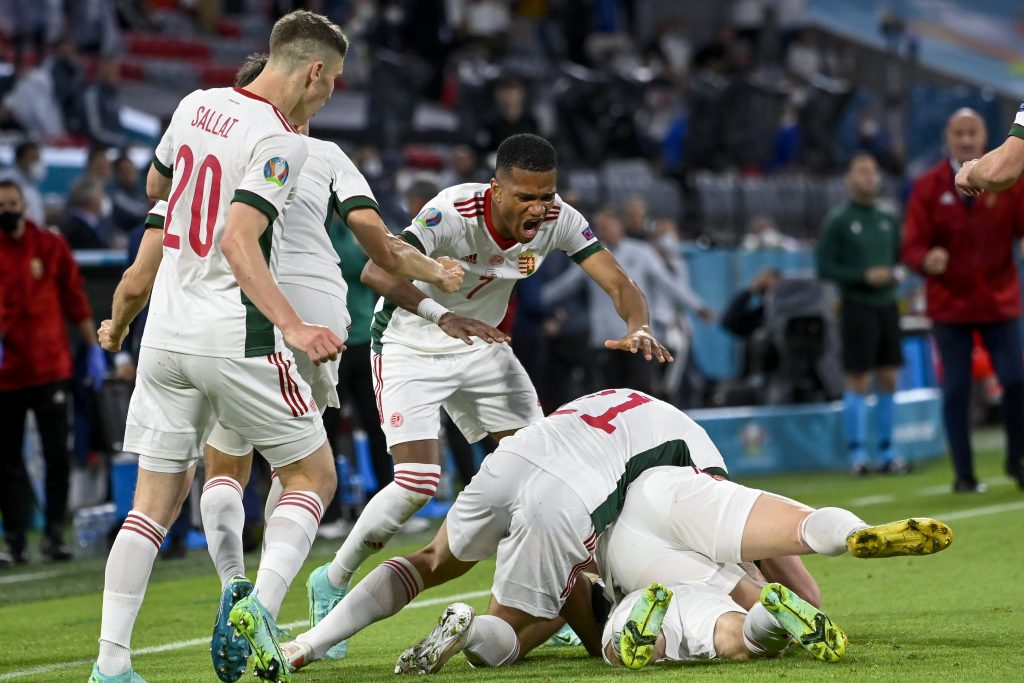 From that point on, something unseen and definitely unexpected was happening: the German team began to kill the time and was obviously relieved and very happy with the draw. Against the much lower-rated Hungary, on home turf, at a European Championships, it was really something no one expected to see.

At the end of the match, the team, including players and staff, went to the Hungarian fans and sang Himnusz, Hungary’s national anthem, together, providing one last uplifting and heartwarming moment for the tournament. 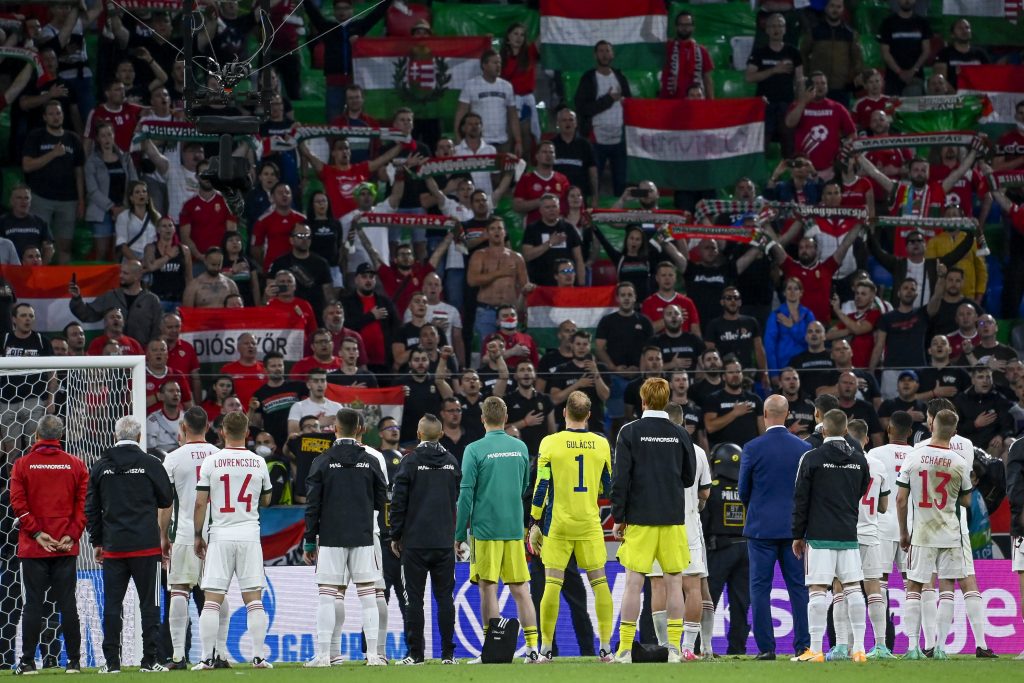 The team singing the national anthem with the fans. Photo by Tamás Kovács/MTI

Hats off to the National 11

Although it is only the final result which ultimately counts in sports, an interesting statistical feature still reveals, that while Hungary had been leading for some 98 minutes in total during the EURO, it only played at a loss for 12 minutes. This time, having played against three of the best national teams of the world, this feat eventuated in two draws (2 points). To be a bit disappointed with the draw, not having been able to beat the Nationalelf on German soil, is really not something Hungarians are used to. Defender Attila Fiola’s words made before the tournament, have really proved to be true: “no one can look down on us anymore.” 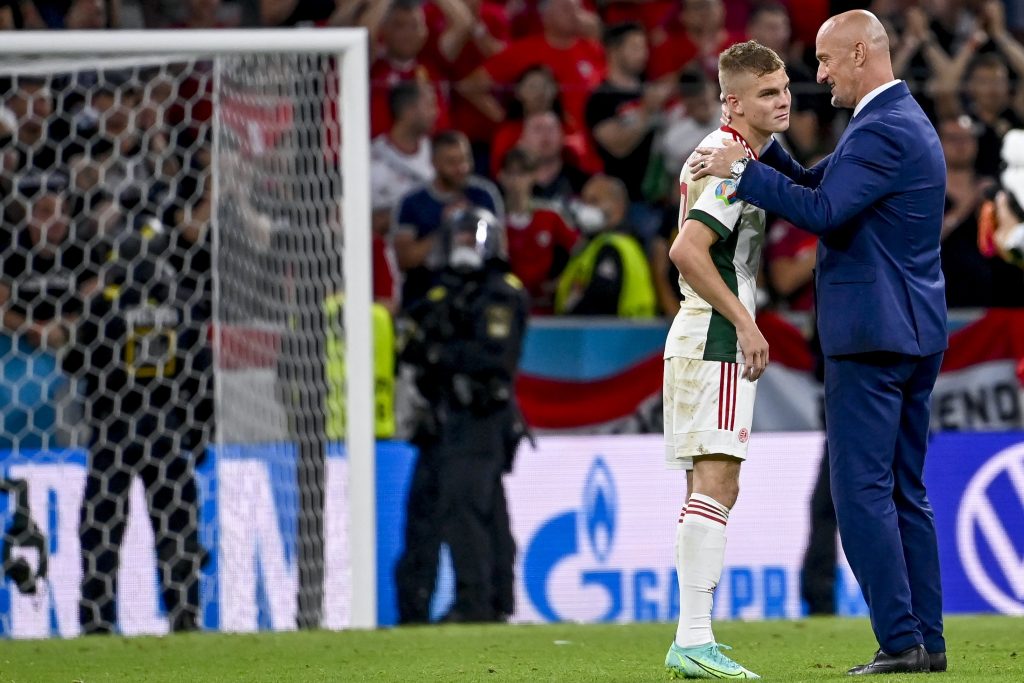 “It’s unbelievable that with a 2-2 draw we’re disappointed in Munich, while they are celebrating. But we are obviously disappointed, we were close to qualification. The players were fighting in all three games like lions, they were never afraid of the big names, they stood up to them bravely and made the country proud. Even the best fairy tales don’t always have happy endings. I know that technically we are not the best in the world, but there are other aspects. Tactically, the way we help each other out is amazing. I’m proud of the team and proud that I could coach them. No one can complain about the performance or the attitude,” coach Marco Rossi commented.

We can’t argue with his words… 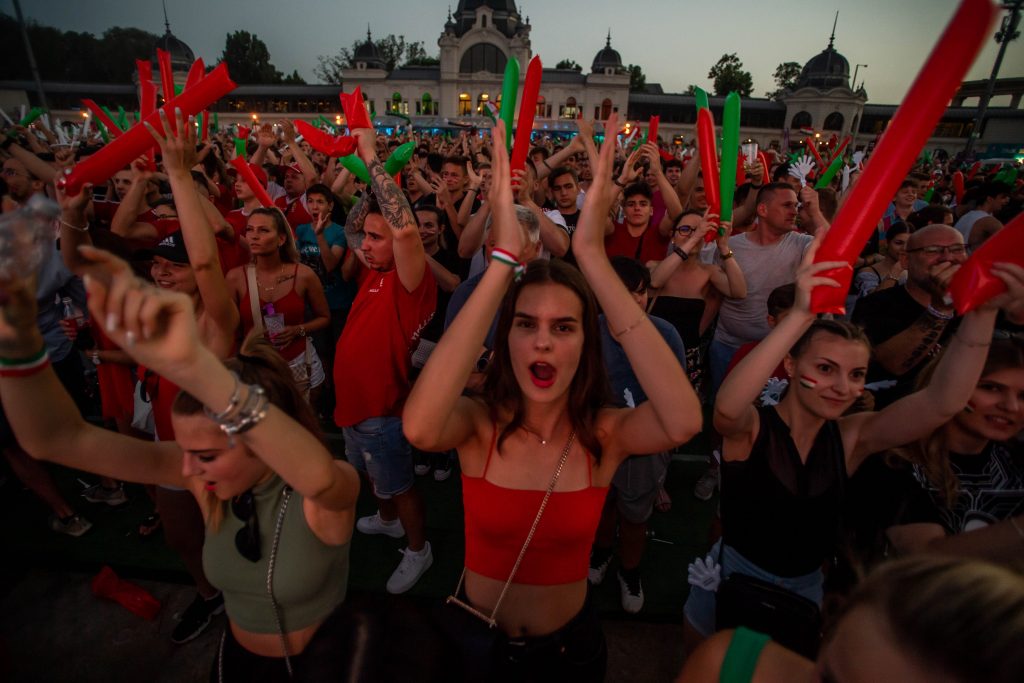 France and Portugal, in the group’s other fixture, played in Budapest’s Puskás Aréna, eventually replicated this result. This means Group F finished as follows:

Today’s results have revealed that the Puskás Aréna’s last game in the EURO will see the Netherlands take on the Czech Republic in the round of 16, to be played on the 27th at 18:00 (Budapest time).