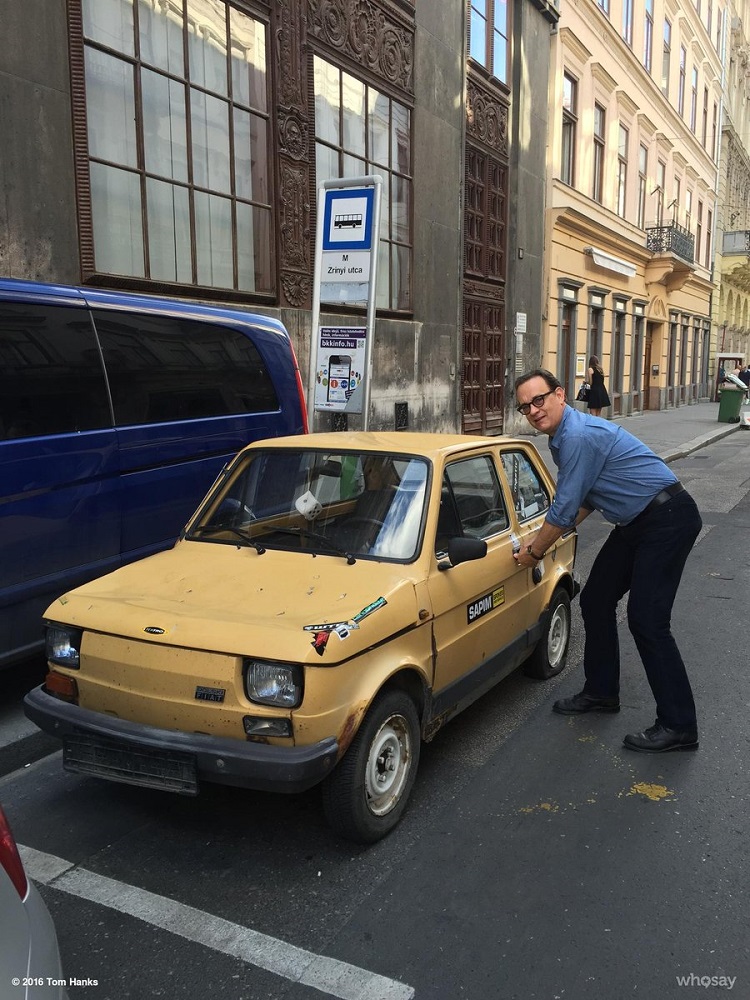 During filming last year in Budapest, (possibly for Inferno), Tom Hanks took time to post photos of himself on Twitter standing admiringly next to tiny communist-era Polish cars in the Hungarian capital.

I got a new car! Hanx pic.twitter.com/kzij8QEIyo

Hanks posed with several of these cars during his time in Budapest, which are known as “Maluch” or ‘little guy’ in Polish, and ‘kispolszki’ in Hungarian. The model, officially known as a Fiat 126 p, was popular in the Eastern Bloc during the socialist era.

So excited about my new car! Hanx pic.twitter.com/e5es8RoR1s

Learning of Hanks’ enthusiasm for the cars, Monika Jaskolska, a 42-year-old mother living in Bielsko-Biala, came up with the idea to send the actor one of them as a gift. The town, located in Southern Poland, was home to a factory where Fiat built over three million “little poles” between 1971 and 2000.

Speaking to the Associated Foreign Press, Jaskolska said she wanted to show the Oscar-winning actor “how fond Poles are of this car.” To that end, she has raised 2,000 euros via Facebook, in order to buy a 1970 ‘Maluch’.

I’m so excited about my new car!! Hanx. pic.twitter.com/rNelj4qj9v

While this amount was not enough to realized Jaskolska’s dream of sending the multi-millionaire Hanks a small communist compact car, a car repair shop has volunteered to renovate it free of charge; in addition, an airline has agreed to fly the ‘Maluch’ to Los Angeles free of charge. As a result, the money raised on Facebook is being donated to a local hospital. As of this writing, it is not yet known when the car will be delivered to Hanks, nor is it known if the actor has any knowledge of the planned gift.