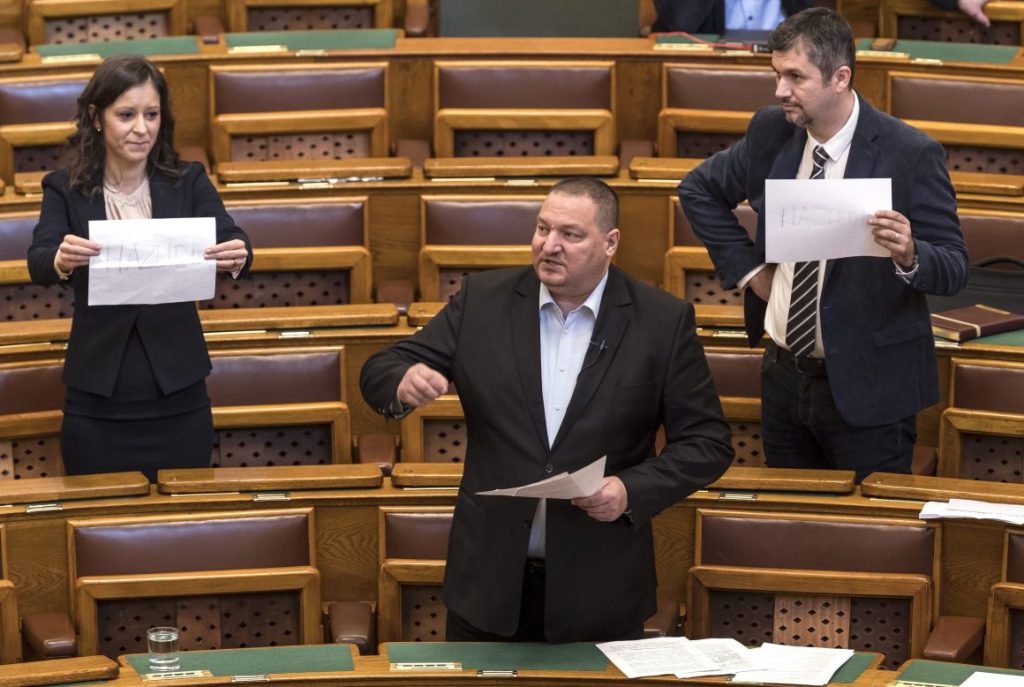 Ruling Fidesz party will walk out of a hearing of Parliament’s National Security Committee focusing on the so-called “Soros Plan”, the alleged plans of US financier George Soros, if Bernadett Szél (pictured above, left), co-leader and prime minister candidate of the opposition party LMP and a member of the committee, attends the hearing.

Fidesz MP Szilárd Németh (pictured above, center), deputy head of the committee, said on Monday that Szél is not welcomed at the hearing, claiming that the politician and her party served the interests of US financier George Soros.

Németh said to news portal pestisracok.hu: “Bernadett Szél and other LMP politicians support the Soros Plan and do not represent the interests of the Hungarian people,” and he added that “Szél was employed by the Soros empire, she used to be on its payroll. Someone who makes decisions in the interest of the Soros empire, who manages their entire party along those lines and controls all of LMP with the implementation of the Soros Plan in mind cannot be allowed to take part in a National Security Committee meeting. If she does, we’ll walk out.”

Németh said Szél – whom he called “an associate of Soros’s” – has “no place in a closed-door meeting where classified information is likely to be discussed” as she is included in Soros’s plan to replace the Orbán government with “his own puppet” government.

Socialist Party member Zsolt Molnár, Chairman of the National Security Committee, told Index that “of course, this cannot happen, Fidesz cannot impose a condition like this.” He added that he has not received an official invitation from Fidesz either.

Szilárd Németh said that he would ban me from the National Security Committee, but he knows that he cannot do it. If they do, we will use all existing legal instruments. The great thinker of Fidesz admitted with this that everything I said about the so-called “Soros Network” was true and everything they say about it, is a lie.”

She added that she will attend every meeting, and going to work to prove each and every time that “they are lying.”