The European People’s Party (EPP) has voted to recommend its members to back the Article 7 procedures the European Parliament had launched against Hungary and Poland, Fidesz MEP Balázs Hidvéghi said late on Wednesday in Strasbourg, after a debate in the EPP.

The parliamentary group was split on the issue, Hidvéghi said, and added that the votes might be divided in an EP vote scheduled for Thursday, with the majority expected to back the probe.

The European Parliament launched an Article 7 procedure against Hungary in 2018 to establish whether there is a risk of a serious breach of the values on which the Union is founded, with a focus on the independence of the judiciary and the freedom of speech, on corruption, the rights of minorities and the situation of immigrants and asylum seekers.

The procedure against Poland was launched in December 2017, in connection with reforms of the judiciary. 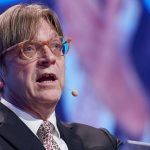