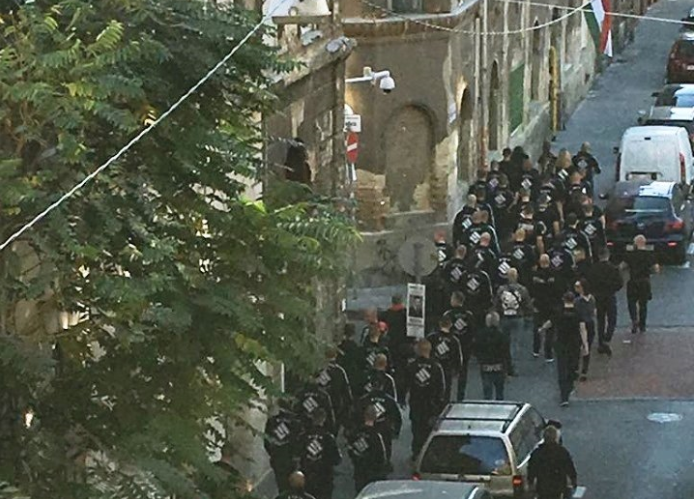 Yesterday, ahead of the officially announced events, an approx. 40-strong far-right group called Légió Hungária marched to leftist-liberal cultural and social hub Auróra, which was closed at the time. The far-righters set fire to a rainbow flag and scribbled their controversial slogans and logo, then marched to Corvin Köz where they disturbed former far-right, now centrist, Jobbik’s remembrance program.

While Auróra -run by the Jewish Marom Association- often takes a stance against governmental decisions and policies, it serves as an important cultural and social hub hosting interesting events, talks, conferences, as well as a number of civil societies and organisations, such as Roma Press Center, Alternatíva Foundation, and Budapest Pride.

Therefore, it is often targeted by right-wing politicians. The previously Fidesz-led local government attempted to shut it down several times based on alleged resident complaints. Far-right groups also often target the club, for example György Budaházy and his followers who recently disturbed and interrupted an event called ‘Getting to Know LGBT People,’ the purpose of which was to educate young people on how to take action against bullying in schools.

The newly-elected opposition mayor of Józsefváros where the club is located, András Pikó, raised his voice against the assault, while police have launched an investigation. Budapest Mayor Gergely Karácsony posted a message to his Facebook page stating: “it is unacceptable – especially on the day of the 1956 celebrations and the 30th anniversary of the Republic’s proclamation – that such acts could happen anywhere in Hungary at any time. I express my solidarity with Ágnes Domokos and Auróra. Also, I very much trust that authorities will immediately start to investigate what exactly happened and take the necessary steps.”

This wasn’t the only scandal on October 23rd Karácsony was referring to. In front of the Liszt Ferenc Academy of Music (Zeneakadémia), controversial pro-government blogger and activist Zsolt Bede allegedly hit Democratic Coalition’s representative Ágnes Domokos who then needed medical help. DK held a protest against Orbán who addressed his speech inside the building.