The family of the late Hungarian architect Imre Makovecz and the foundation bearing his name have issued a joint statement speaking of their “amazement and regret” at having to gain information on the monumental statue to be erected in memory of the world-famous architect from the press.

In early June, sculptor Miklós Melocco told the weekly Heti Válasz that he is working on a memorial to the late architect, who died in 2011. The 14-metre tower is planned to be placed near the Buda bridgehead of the Chain Bridge, next to the lower station of the Funicular Railway; the plans have already been accepted by PM Viktor Orbán and Budapest mayor István Tarlós, he added.

Later, Mr. Tarlós told index.hu that although he found the  sketches of the monument shown to him appealing, he would not place the statue on Clark Ádám tér. Because the capital does not have sufficient funds to finance a memorial of such magnitude, he forwarded the plans to the Prime Minister’s Office and, according to his information, Prime Minister Viktor Orbán has already engaged in negotiations with Mr. Melocco on the project.

In their present statement, the architect’s family stress that neither the late architect’s relatives, nor the foundation bearing his name were shown the memorial’s plans and express their “reservations” concerning the statue’s gigantic size and removing another memorial, the “0” kilometre stone, to give place to the Makovecz statue. 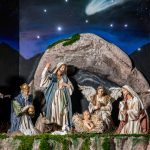