The National Election Committee (NVB) has rejected various referendum questions submitted by an anti-government civil organisation. At an anti-government demonstration on March 15, the organisers announced it would put forward 19 questions covering corruption, the economy, educational and social goals, eliminating the state’s tobacco monopoly, opening up secret files on key state investments and abolishing toll motorways among others.

Last week the NVB considered a number of questions, unanimously approving two on restoring the school leaving age to 18 and eliminating the compulsory payment of membership fees to the chamber of commerce. Yesterday the NVB considered and rejected another seven questions, including on opening up communist era secret files on informants, on releasing financial details of the planned upgrade project of the Paks nuclear power plant and abolishing the new motorway e-toll. The NVB said the referendums could not be held since changing the relevant laws would require amending the constitution. Further, the issues were affected by international agreements and fall beyond the powers of parliament.

The referendum questions were announced at an anti-government demonstration held on the afternoon of the March 15 holiday in Budapest. The march from Keleti railway station ended at the Astoria junction under the slogan “For a New Hungarian Republic!” Organisers estimated the crowd at 5,000-10,000 and said it was for “freedom, civic equality, equality in burden sharing and independence”, and “restoring the republic crushed by the Fidesz government.” The organisers announced 19 referendum questions, including anti-corruption, economic, educational and social goals, the elimination of the state’s tobacco monopoly and retail closures on Sundays, opening up secret files on key state investments, free use of motorways and for transparent public procurements. 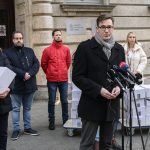