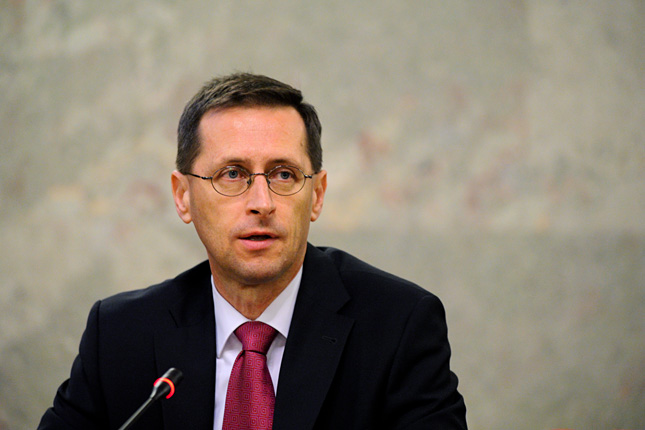 Economy Minister Mihály Varga has called for efforts to further reduce Hungary’s public debt in the next few years, and said the government was working to promote companies with exports. Speaking at a function of the Hungarian Economics Society, the minister said that companies should also be helped whose products could be used to replace goods currently imported. Areas where Hungarian companies could succeed include pharmaceuticals, chemistry, medical equipment, as well as water treatment and supplies for car manufacturers, the minister said. Job creation continues to be a top priority for the government, Varga said, and noted that dual training would be introduced in the next academic year, which, he said, would increase Hungary’s competitiveness in the long run.

Meanwhile Mihály Varga has held talks in Brussels with Jonathan Hill, EU commissioner for financial stability, financial services and capital markets union, addressed the European Commission’s country specific recommendations as well as a proposal for a union of capital markets. Varga told MTI that he had urged Brussels to give more credit for the impact of structural reforms on economic growth when preparing its report on Hungary. In February, Hungary came to an agreement with the European Bank of Reconstruction and Development (EBRD), the implementation of which is under way. As part of the accord, the government has undertaken to reduce the bank levy in the interest of stoking lending. The cabinet is expected to approve this measure in the first half of this year, he said, adding that the tax would change on January 1, 2016 at the earliest.

Varga noted that another part of the EBRD agreement undertook the government to pursue closer cooperation on matters affecting the financial sector. Sectors that are sustainable and provide stable jobs should receive support, and the government will work together with certain sectors over the long term on their Hungarian operations and their sharing of the tax burden. “Sectors that were profitable during the period of the crisis and did less to participate in the sharing of the public burden have been drawn into the system of special taxes,” he said. He said it would be desirable were Brussels to take into consideration that various independent institutions, Morgen Stanley and Standard and Poor’s among them, had generally given more positive evaluations of the performance of the Hungarian economy. “The IMF, in its latest quarterly report, painted a much more positive picture of expected growth and the outlook than the European Commission,” he said, adding that Hill had assured him that in the report now under preparation, several points would be reassessed, and the document to be finalised by May could yet change with regard to several others.

Varga said the Hungarian government gave its full support to the “green book” of capital markets union. Hungary’s interest is to see greater movement between capital markets, which could bring benefit for the countries in the region. The minister said, at the same time, that the government wants to put forward proposals with regard to improving the capitalisation and lending environment of small and mediumsized enterprises, as well as on how to take into account the aspects of the smaller capital markets when it comes to the break-down of barriers. Hill indicated that he was open to these suggestions.

Finance Minister Calls on EBRD to Focus on Central Europe