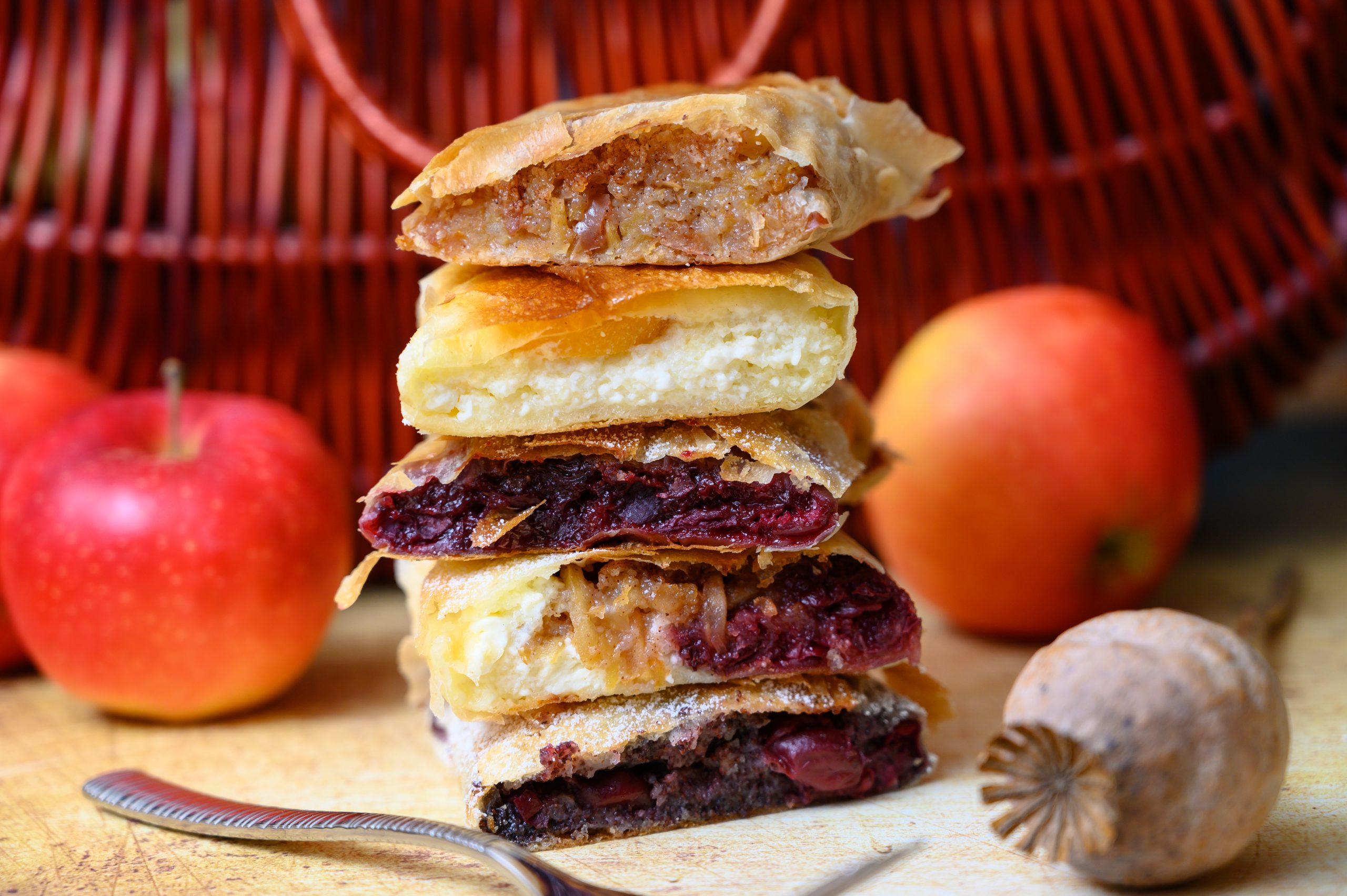 Our most popular and well-known pasta-based dessert, the strudel, or as we call it – rétes, is also the most complicated to prepare traditionally. However, with a little twist, everyone can bake it easily for the family in a few minutes.

The strudel is a real co-production from the region, as the dessert, filled with either sweet or savory delicacies, is not only popular and claimed as a national dessert in Hungary, but also in Austria and Serbia. In Hungary, it is made from a very soft, kneaded dough, stretched out on a table until it becomes paper-thin. 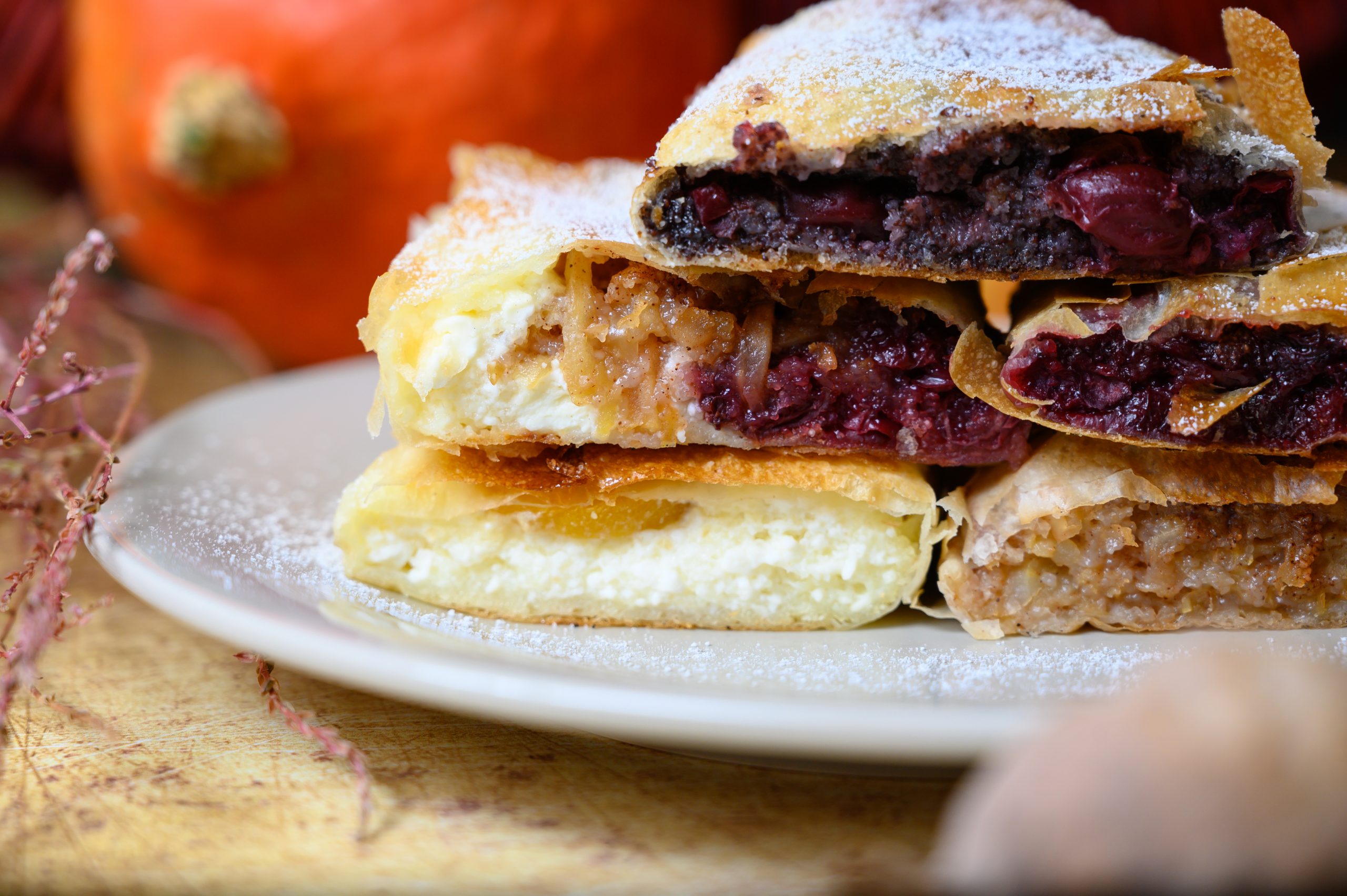 It was presumably established under Turkish influence in the 16th century; its predecessor is the baklava that still exists in the Balkans. Its present form, the rolled, stuffed strudel, was developed at the turn of the 18th and 19th centuries in the territory of the Austro-Hungarian Monarchy and has been a common item on the table for festive and wedding meals in Hungary since the 19th century.

The first records of the dessert come from the Piarist monk Kristóf Simai, who wrote down the recipe for the strudel between 1795 and 1799 in various forms, including fillings such as sour cream, cottage cheese, rice pudding, poppy, apple, and cabbage in his manuscript cookbook in Selmecbánya (the current Banská Štiavnica).

Traditionally, if a family decided to make strudel, several different fillings were made at the same time, as stretching the dough was legendary, it required a huge surface area and the work of several people, so if they were already stretching strudel, they made enough for the whole family. That is why making a traditional strudel dough is a challenge even for those experienced in the kitchen. 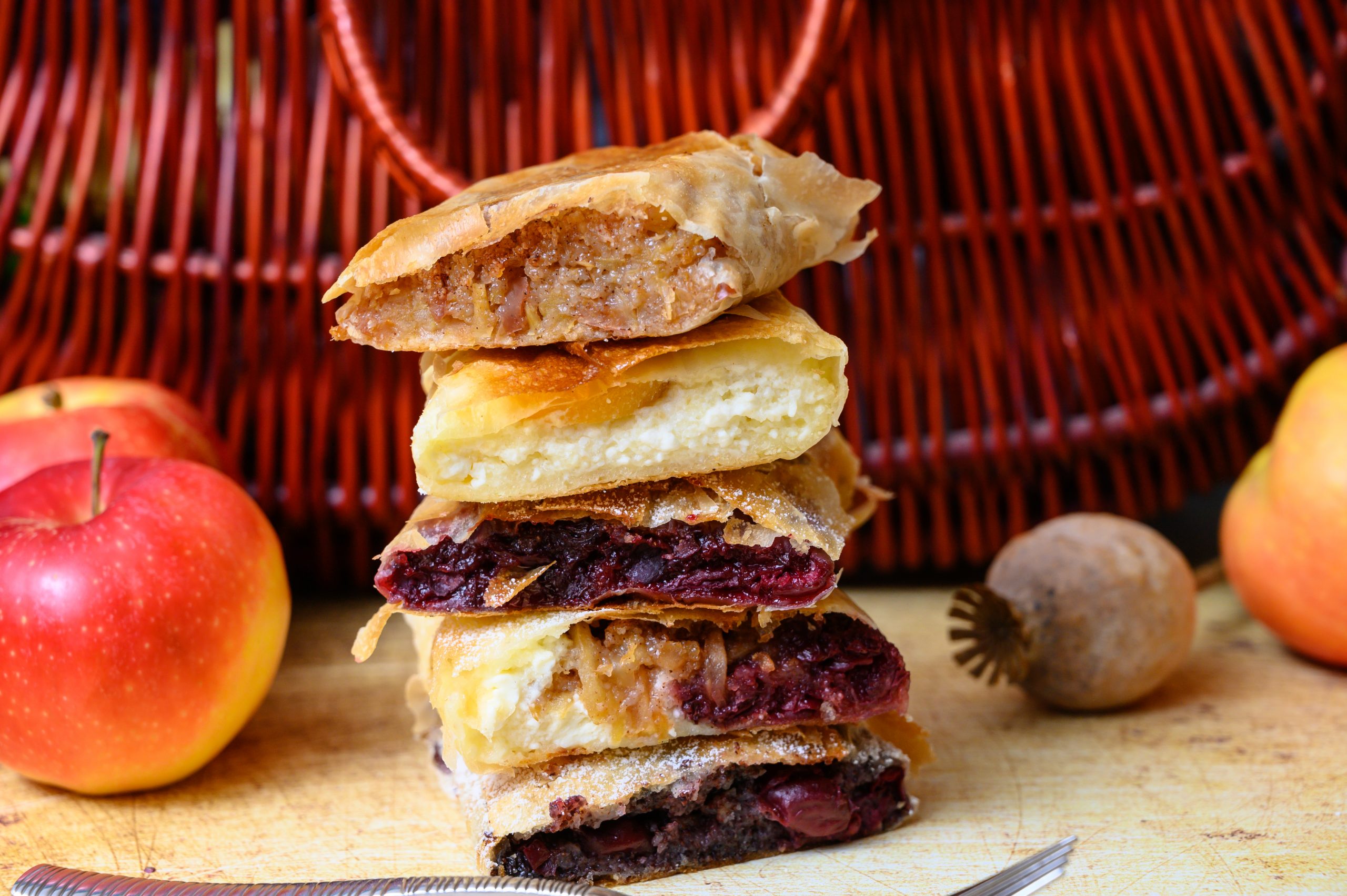 However, nowadays, with the help of good quality pre-made strudel sheets which can be bought at almost any store, we can easily make it with any filling. The trick is to add a little semolina or breadcrumbs to the filling if we prepare the filling with only fruit, so that the strudel does not get wet. But poppy seeds or cottage cheese can also be a great addition to the fruit. The most popular filling combinations include apple with cinnamon, cherry and semolina, poppy seed and cherry, and peach and cottage cheese.

One of the most exciting filling combinations, however, is the pumpkin-poppy strudel, which also brings real autumn vibes and not to mention it smells delicious. Although for the original pumpkin-poppy strudel from the Őrség region of Hungary, people usually use squash, the dessert will be more colorful and tasty with pumpkin. 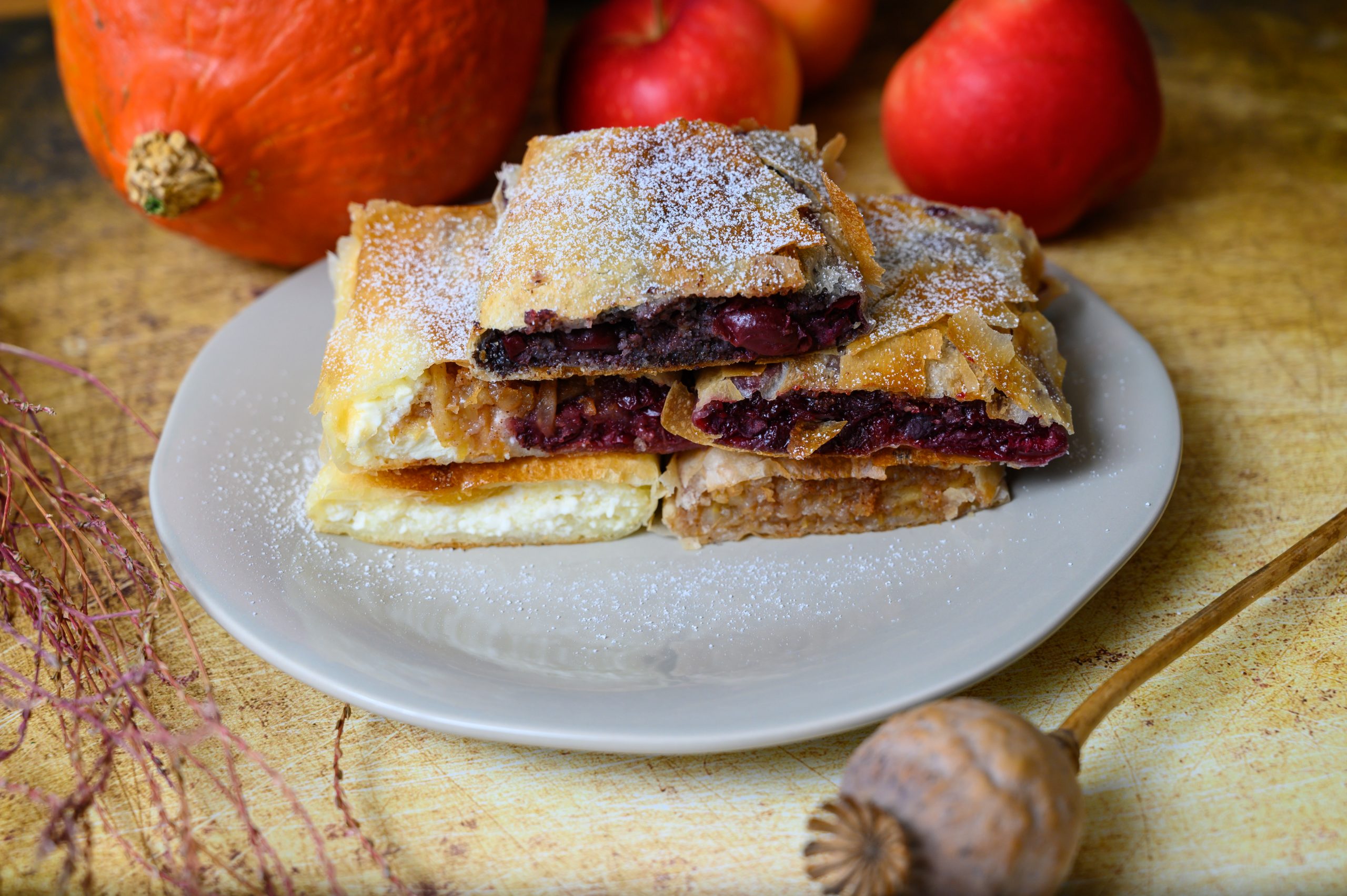 First, clean the pumpkin and cut it in half, remove the seeds and grate or steam the pumpkin meat, which should be around 260 grams. Then spread 1 serving of strudel sheets (3 sheets) on a slightly damp kitchen towel. With this kitchen towel we will be able to easily roll up the strudel and the moisture will prevent the sheets from breaking. Put a little oil between the sheets, but do not soak them very much. To avoid too much oil, we can also work with oil spray and then we only need to use a few sprays between the sheets. 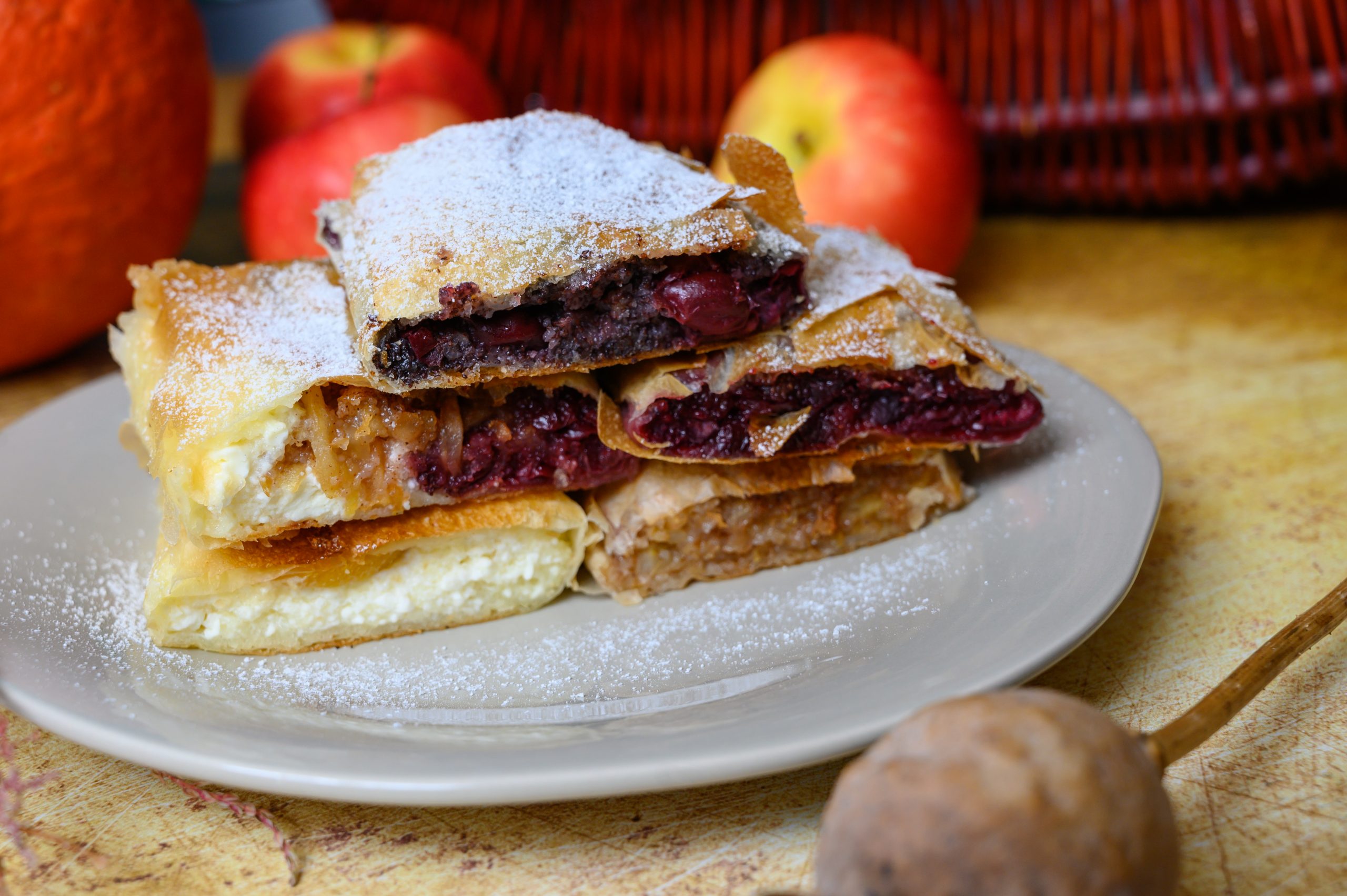 Next, prepare the filling. Mix the poppy seeds with the sugar and sprinkle onto the top layer of the strudel. Then add the pumpkin on top of the poppy layer, and sprinkle with sour cream and oil. Using a kitchen towel, roll up the strudel and place it on a baking sheet lined with baking paper of the appropriate size. Make the second strudel in the same way.

The strudels should be packed tightly next to each other in the tray, so they don’t spread out and don’t get too flat. Grease the top of the strudel with sour cream and bake it in a preheated oven at 160 degrees for 30-40 minutes, until the top turns golden brown. Then wait for it to cool and then slice it and sprinkle the top of the dessert with powdered sugar.