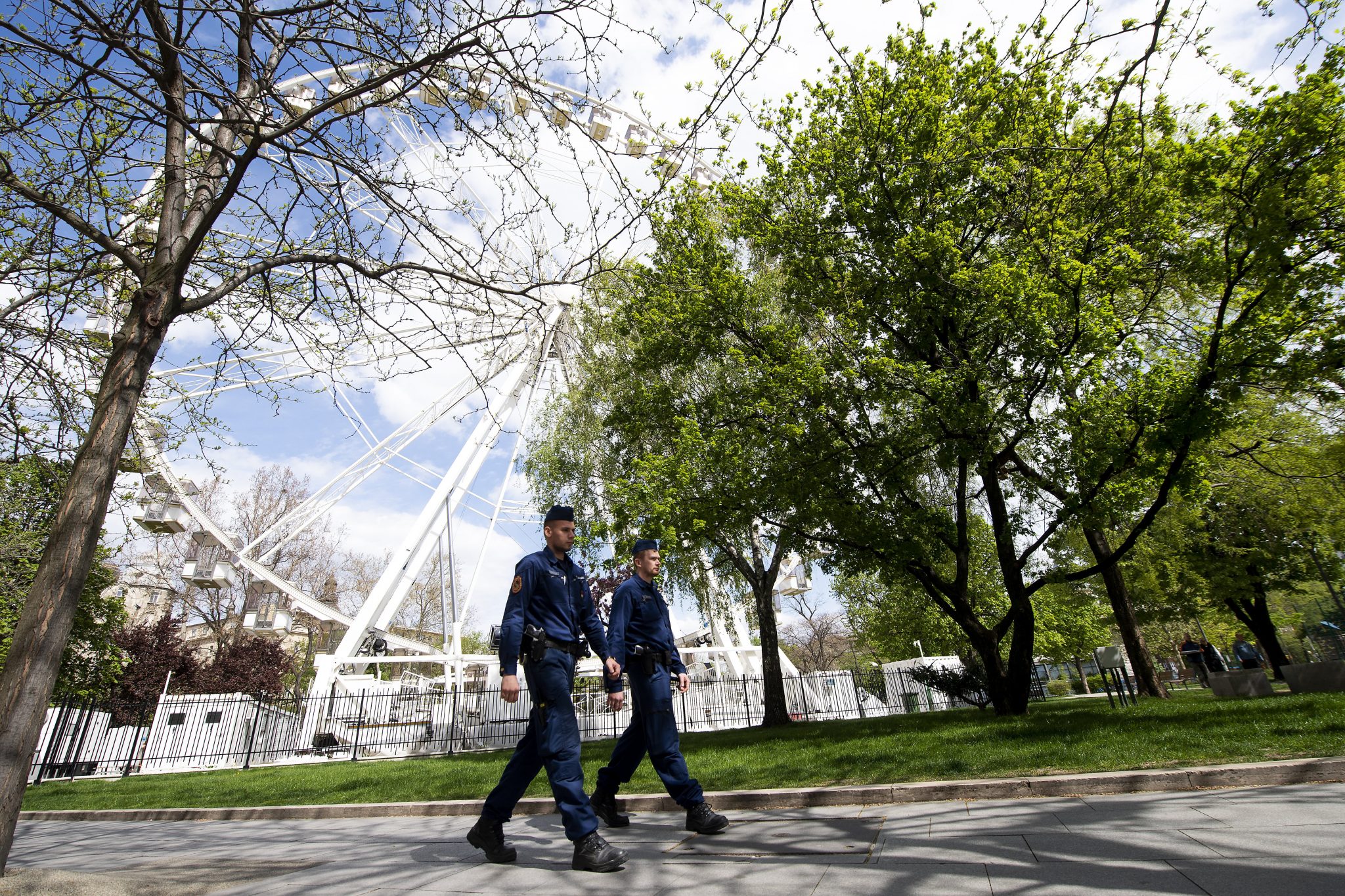 Like most European countries, Hungary will soon begin easing the restrictions introduced in late March in an attempt to curb the coronavirus epidemic. The government for days has been saying that the measures proved to be successful, the country managed to ‘flatten the curve’ and we are beyond the peak. Lifting the lockdown measures would be a tremendous help for the economy and thousands of Hungarian families. However, several experts warn that we need to be careful.

Hungary introduced measures for the first time on March 17th  to curb the coronavirus epidemic. Theaters, museums, libraries, cinemas, and other cultural facilities closed. Only food stores, pharmacies, drug stores, gas stations, and tobacco shops were allowed to remain open outside of the (slightly) restricted opening hours. At the end of March, the government decided to introduce further restrictions. Prime Minister Viktor Orbán announced in a radio interview that a restriction on movement would be imposed between March 28th and April 11th, which has since been extended and is still in force.

Early restrictions in the region resulted in less infections

Various strict movement restrictions have been introduced by most countries since the outbreak of the coronavirus epidemic in Europe. Our neighbors, without exception, have introduced similar measures, most of them ahead of Hungary.

Be Prepared: Individual Responsibility Will Take Over after Gov’t Restrictions Ease

The restrictions imposed at that time are, moreover, not the most stringent in a regional or pan-European comparison, but almost all the measures have been introduced in some form in neighboring countries.

While there are significant differences, many similarities can be discovered, which is no coincidence: the government has repeatedly emphasized in the past weeks that they are consulting with neighboring countries on preventive practices and trying to follow their example.

*As of Friday morning. Source: worldometers.info

Waiting for the peak to come

Meanwhile, over the past few days, the government started speculating that Hungary might soon get over the peak of the novel coronavirus. The first phase of protective measures against the novel coronavirus will end next weekend and the government will introduce new rules to replace the curfew restrictions in order to gradually restart life, Prime Minister Viktor Orbán said in an interview on Friday.

According to Orbán and the Chief Medical Officer, the coronavirus peak is expected as early as May 3rd in Hungary. However, PMO Head Gergely Gulyás added that the so-called plateau will last for weeks.

Looking at the most recent coronavirus data in Hungary, it really does seem that the number of cases is not drastically increasing.

Until April 23rd, the number of daily new confirmed coronavirus cases only exceeded 100 on six occasions, with most Covid-19 cases registered in closed communities. Therefore, the available data does indeed point in the direction of the number of patients not constantly increasing; however, the data tend to indicate stagnation rather than gradual decrease. 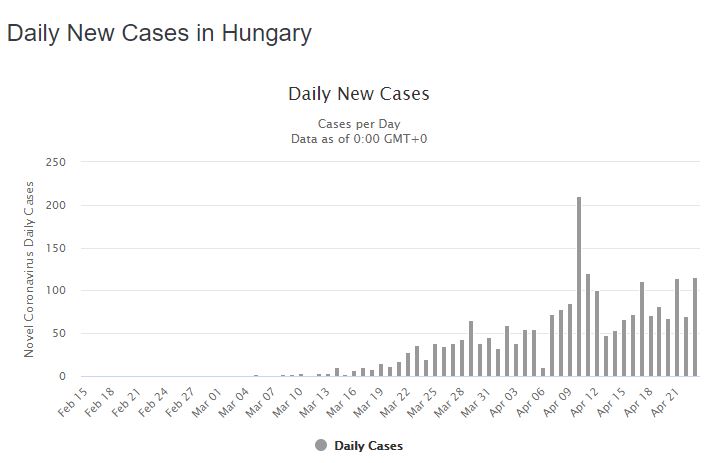 Also, several experts point out that the peak cannot be precisely predicted even though the various mathematical models can provide intel, they can also often be wrong.

In addition, the assessment of Hungary is even more difficult as the country is one of those with the fewest tests conducted in the region, which can significantly distort the prediction of the spread of the virus.

Nevertheless, the government is hopeful that easing the restrictive measures may begin soon.

Hungary’s timely response measures to the novel coronavirus outbreak have successfully slowed the virus’ spread, and the country is ready to embark on a gradual reopening of the economy early next month, the innovation and technology minister said in a statement on Thursday. 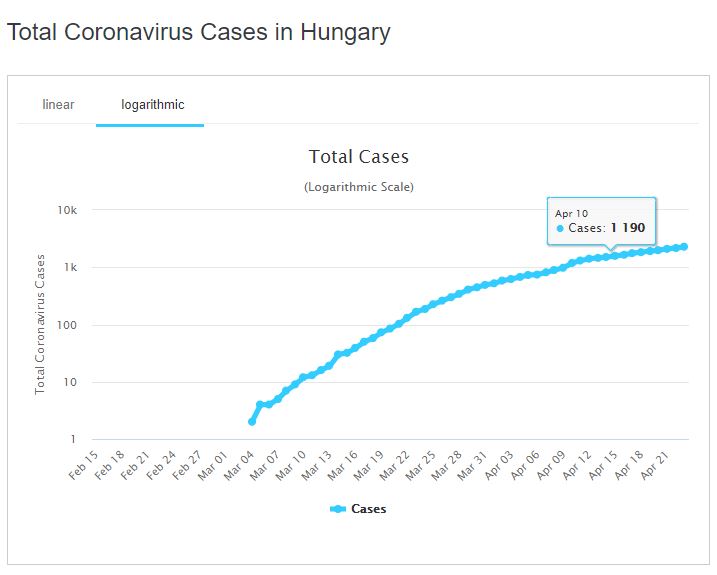 Of course, the situation is not that simple, because if the restrictions are lifted too soon, the spread of the epidemic may erupt, erasing the positive effects achieved so far, while if too late, Hungary has to face even more severe economic damages than at present.

Neighboring and V4 countries to ease as well

However, the decisions of neighboring countries show that easing restrictions could start slowly in Hungary as well.

Austria became the first European country to announce it would begin lifting its lockdown measures, just as they were the first to introduce restrictions in the broader region.

Last week, non-essential stores under 400 square meters were allowed to open. On May 1st, shops, shopping malls, and hairdressers will follow suit.

The Czech Republic announced its five-stage plan to take effect on Monday with farmers’ markets, car dealerships and some other small businesses allowed to reopen since theirs was one of the earliest lockdowns in Europe, introduced on March 12th.

Slovenia has also allowed the reopening of stores selling construction materials, technical goods, furniture, motor vehicles and bicycles, dry cleaners and repair shops from Monday, with hair and beauty salons, certain sports and recreational services to follow in early May.

Slovakia also decided to allow the reopening of small shops of up to 300 square meters, outdoor sports areas, outdoor market places, and restaurants for takeaway meals as of Wednesday.

It is crystal clear that the economy cannot survive much longer with countries being quarantined. Further and extended quarantine would result, and has already resulted in a financial crisis for a growing number of families. Ending the restrictions has definite risks as the virus can break loose, hence the gradual introduction of easing them is more than reasonable. But it seems the Central European region is trying to break out of the vicious circle of the pandemic and the economic crisis at the same time.