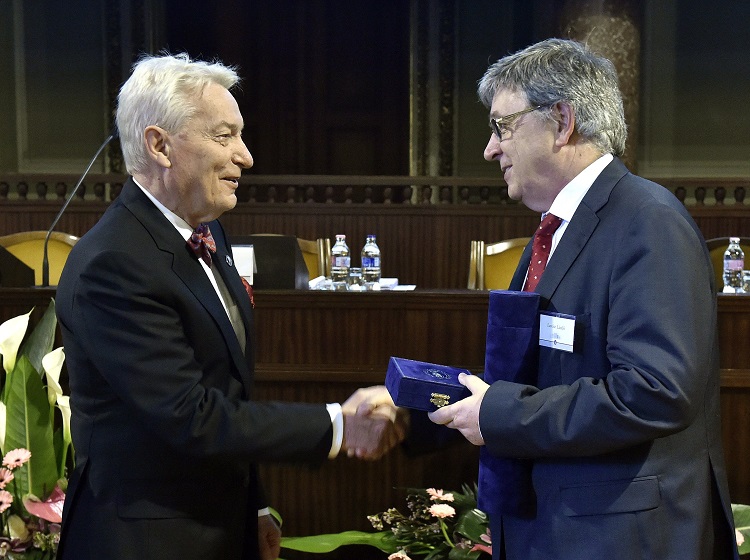 According to Hungarian wire service MTI, E. Sylvester Vizi, Széchenyi-award winning neuroscientist and Chair of the Board of the Friends of Hungary Foundation, has been awarded the Academic Gold Medal from the Hungarian Academy of Sciences (MTA).

The Friends of Hungary Foundation, which held its fourth annual conference this past weekend, is the parent organization of Hungary Today and its German-language sister-site, Ungarn Heute.

Dr. Vizi, who was himself head of the Academy of Sciences from 2002 to 2008 (and who had an asteroid named after him last year), received the award from current president László Lovász at the organization’s 188th General Assembly.

In addition to the Gold Medal awarded to Dr. Vizi, the Academy of Sciences also handed out Academic Awards to fifteen researchers for their outstanding work. Likewise, the MTA awarded Veronika Ivánszky Putarich the János Arany Lifetime Achievement Award for her decades of achievement in research and education; they also granted the Academy Journalist’s Award to Index reporter Zsolt Hanula for his work popularizing scientific knowledge, chiefly through his regular column “Ma is tanultam valamit” (Today I Learned Something).

In his opening speech, Dr. Lovász emphasized the importance of “maintaining public trust” toward the Hungarian scientific and academic world. He noted that the Hungarian Academy of Sciences is focused on improving Hungary’s future through scientific advancement, while remaining distant “from the politics of the day.”

He also discussed the launching of programs aimed at bringing about a healthier climate and society, such as clean water and educational systems better attuned to our quickly changing world. Referring to the Academy’s public responsibility, Lovász said that

People listen to what we researchers say. Therefore, let us speak out whenever we feel it to be necessary, so that as many people as possible might hear us. This is not just an opportunity for us, but our responsibility as well!

Dr. Lovász has been following his own advice in this regard, as he has been outspoken in his support of the Central European University, and in his opposition to the Hungarian government’s controversial “Lex CEU” amendments that many argue are aimed at driving the university out of Budapest.