Dutch Cultural Festival to be Advertised With Hungarian Performers

Recirquel’s ‘My Land’ will be one of the main attractions of this year’s Cultura Nova, a Dutch cultural festival, where the Hungarian group will perform their act for the 100th time. The nearly thirty-year-old performing arts festival is promoting this year’s international event series with the Hungarian performance and artists.

Cultura Nova is hosting more than 200 cultural performances at more than 25 locations, including theatrical, film, and musical productions. Written and directed by Bence Vági, ‘My Land,’ which explores the relationship between man and motherland, will be on view from 28th to 30th August in the Netherlands.

Cultura Nova Performing Arts Festival, which turns the Dutch city Heerlen into a cultural scene, presents unique, pioneering forms of theater, dance, music, film, and visual arts every year, for the 29th time this year. As part of the 10-day festival, over 200 venues, including theatrical, film, and musical productions will be on scene in more than 25 venues.

This year’s festival, featuring the world’s leading circus troupes, will receive the Hungarian Recirquel group with their new performance ‘My Land’ in August, and the Hungarian artists will also be featured on Cultura Nova’s commercials and other venues.

Recirquel is already a well-known name in the Netherlands, with the company performing for the third time this year at the Cultura Nova Festival. In 2018 their performance of ‘Paris Night’, and in 2015, ‘The Nude Clown’ were both major successes in Heerlen. This year, Recirquel’s My Land will be screened four times between August 28 and August 30 by Dutch audiences.

Watch the trailer of the performance below:

Recirquel’s ‘My Land’ made its debut at last year’s Edinburgh Fringe Festival, and since then, it has been widely recognized by critics at many international festivals. The performance will be presented for the 100th time at Recura by Cultura Nova. The production, directed by Bence Vági, combines contemporary dance, theater and circus art, and focuses on the eternal relationship between man and motherland, exploring the roots of humanity. Breaking down the boundaries between genres, ‘My Land’ evokes the technical knowledge and visuals of contemporary dance companies, as well as the impressive energies of Eastern European performing arts.

Recirquel’s ‘My Land’ will be available to Hungarian audiences on September 13th at the stage of the Müpa (Palace of Music) in Budapest. 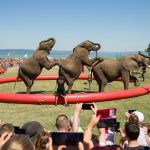 Night of the Circuses – Special Shows in Balatonlelle, Zamárdi, and Budapest