Eliezer M. Rabinovich was born in Moscow, Russia, in 1937. He graduated from the Moscow Institute of Chemical Technology named after D.I. Mendeleev and now lives in the United States.  Besides articles in his technical profession, he has published more than 30 papers on literature, historic and philosophical issues. Visiting Hungary, he became interested in the details of the Hungarian Holocaust and several years ago wrote a small article on the topic in the Russia-language Internet magazine. A year ago he developed it into a fundamental 100-pages scientific work with 75 references titled: “Rescue of the Budapest Jews: Miklós Horthy, Diplomats, and Many Other Righteous Hungarians”.
The below piece is the first part of a summary of Dr. Eliezer M. Rabinovich’s 100-page article published in Russian by the magazine “Evrejskaya Starina” (“The Jewish Antics”), #1, 2014.

March 19, 1944, about 6 pm.  At the Royal suite of the Palace in Buda, two aged and exhausted men are having a long talk.  They are His Highness Miklós Horthy de Nagybánya, Regent of Hungary, and Prime Minister Miklós Kállay.  Yesterday, the German troops occupied the country to force Kállay’s resignation and to install a puppet pro-German government.  The former Premier is convinced that the Regent is making a grave error agreeing to stay in his post.  There is no Parliament, and Hungary has ceased to be a constitutional state; Kállay believes that all Horthy’s decisions “would be taken on his own individual responsibility.”  Kállay “begs him to abdicate as a demonstration.”

«I cannot, – Horthy says striking his chair, – leave this chair empty. I cannot let a usurper sit in this place. I have sworn to this country not to forsake it.  I am still an admiral. The captain cannot leave his sinking ship; he must remain on the bridge to the last.  Whom will it serve if Imrédy sits here?…   Who will defend the honorable men and women in this country who have trusted me blindly? Who will defend the Jews or our refugees if I leave my post?  I may not be able to defend everything, but I believe that I can still be of great, very great, help to our people…”  Kállay replies that “however honorable and heroic his attitude, whatever profit it might bring, despite all, both he and Hungary would be branded as criminals.”  Then Kállay suggests that Horthy, not abdicating formally, leaves for his estate and refuses to sign any documents.

“No,” the Regent answers. “There would be resistance in Hungary…  The army would obey no one but him.  Then, what the people say if a possibility, a suitable moment, came for action and he was not at his post?”

Had we been secretly present at this conversation, we would have thought that Kállay was absolutely right, and the vain old man simply does not understand the situation.  In two days New Reich plenipotentiary Veesenmayer would convey to him Hitler’s wish that he would not interfere in policymaking and in the Jewish problem but remain a symbolic figure.  In the critical moment he would find out that he could not even rely on his Chief of the General Staff.  Of course, he should have accepted the advice and used the opportunity to retire with honor at age 76!

But had he done so, an additional quarter million Jews would have become Holocaust victims and the majority of the Budapest Jews would not have survived the war.

But had he done so, the actions of the diplomats and the righteous people in the Arrow Cross government’s period would have been fruitless; there would have been no Jews left to save.

Thomas Jefferson said that “there is a natural aristocracy among men. The grounds of this are virtue and talents.”  I would say that virtues are more important than talents, and this is what we observe now in the figure of Miklós Horthy.

Everyone knows of the efforts of diplomats like Carl Lutz and Raoul Wallenberg in saving the Jews of Budapest in 1944.  Almost no one, however, knows that their undertaking would have been impossible if the Jews had not first been saved from deportation by Regent Miklós Horthy.  Deprived of real power by the German occupation of March 1944, the 76-year-old admiral found a loyal armored unit, took back partial power and forbade further deportations.  None of the major historians disputes the facts, but Horthy has never been given proper recognition, because he helped to suppress the communist revolution in 1919 and held a strong anticommunist stance throughout his entire life.  The so-called “liberal” way of thinking condemns Horthy a priori, disregarding the facts.

In the period between the two world wars, Hungary became very anti-Semitic.  Nazism in Germany provided a strong encouragement and prior to WWII the Hungarian Government passed three laws which limited the rights of Jewish citizens.  Germany pressed Hungary to deport its Jews and was prepared to pay for the deportation and provide all the logistics.

Was Horthy an anti-Semite?  In a famous letter to Prime Minister Pal Teleki, Horthy boasted of being a life-long anti-Semite but wrote that “since, however, one of the most important tasks of the government is to raise the standard of living, i.e., we have to acquire wealth, it is impossible, in a year or two, to replace the Jews, who have everything in their hands, and to replace them with incompetent, unworthy, mostly big-mouthed elements, for we should become bankrupt. This requires a generation at least…  I cannot look with indifference at inhumanity, senseless humiliation, when we still need them.”

But the bare facts prove misleading. Horthy’s statement that he had “never had contact with Jews” is laughable; he played bridge with them, invited them to his table, and encouraged them in commerce. But in this particular moment of history he was a leader of the nation that had chosen anti-Semitism as a way of life. In the 1939 elections, the “Arrow Cross” and several small right-wing parties received a quarter of the votes.  So is it possible for the leader of an anti-Semitic society not to pay at least “lip service” to anti-Semitism in order to protect the Jews?

In March 1942, Horthy appointed a liberal friend, Miklós Kállay, as his Prime Minister.  Kállay asked the leaders of the governing party on what conditions they would support him governing. They replied that their views were “dominated by a desperate fear of the Soviet Union and so these people wished for a German victory … That fear was the basis of their attitude towards the Jews, too. If Germany won the war, and we continued our tolerance towards the Jews, the Germans sooner or later would treat Hungary as a Jew-ridden enemy country …  The Western powers … would hand us over to the Soviet Union …”  It would be wrong to say that these leaders were mistaken in their fears. Therefore, the conditions of their support were that Kállay “made concessions to public opinion on the Jewish question” and “made a pro-German declaration.”

Kállay accepted, with reservations.  He gave a speech to the party committee, coordinated, with the leader of the Jews:

“A final settlement of the Jewish problem could only come after the war, when the only solution would be to expel the 800,000 Jews.”  What this really meant, of course, was that until the end of the war the Jews were safe.

On June 7, 1942, he visited Hitler and told him that “the elimination of the Jews from our national life… could only be a gradual process”.

On August 15, 1942, the Hungarian ambassador to Germany, Döme Sztójay, reported that Hitler disagreed with the postponement and demanded immediate anti-Jewish actions, and on October 8 and 17 von Ribbentrop, Germany’s foreign minister, elaborated German demands in a letter and an official note sent to Kállay. On December 5, 1942, the Hungarian government firmly rejected the demands.

On April 17, 1943, Hitler summoned Horthy and demanded that Kállay be dismissed. Horthy firmly rejected. Kállay wrote: “Horthy declared … once and for all, that just as he had never dreamed of trying to influence Hitler or the German government in their choice of ministers so he would accept no prompting, nor even the expression of a wish or an observation, that his premier, who enjoyed his full confidence, should be replaced.”

No Jew was deported during Kállay’s tenure, and the borders were opened for Jewish refugees from Poland and Slovakia; Minister of the Interior Ferenc Keresztes-Fischer supervised the refugees’ absorption.  Randolph Braham wrote: ”By the second half of 1943 Hungarian Jews had become firmly convinced that they would survive the war under the continued protection of the aristocratic-conservative regime of Miklós Kállay.”

According to István Deák, Horthy told Hitler “that the Jews were necessary to the Hungarian economy and said, naively, “What am I supposed to do with the Jews then, after I have taken from them all possibility of making a living? After all, I can’t have them shot.”  Horthy’s biographer Thomas Sakmyster noted:  “Hitler never quite figured out what to make of the Hungarian Regent: was he a hopelessly uninformed political innocent, or was he a shrewd calculator who feigned ignorance…?”

On March 18, 1944, Hitler called Horthy again and told him that he had ordered the occupation of Hungary with the purpose of replacing the Kállay government with a government more “friendly” (read – “obedient”) to Germany.  Hitler kept Horthy in his residence incommunicado until the occupation was completed on March 19th.

Next day after his talk with the Regent, Kállay to avoid arrest found a refuge in the Turkish legation.  The Regent still stood up to Hitler, refusing his wish to appoint the rabidly anti-Semitic Béla Imrédy as the head of the new government and instead appointed a former ambassador to Germany Döme Sztójay.  Eichmann arrived in Budapest to organize the deportations to the East, ostensibly for work, beginning with the provinces.  Sztójay appointed Andor Jaross, László Endre and László Baky in charge of deportations, and deportations to Auschwitz began in mid-May with 12,000 people daily, totaling 437,000 by July 6.  Upon their arrival, the majority were immediately gassed.  István Deák stated that nearly 200,000 Hungarians helped deport the Jews. On the other hand, as Deák wrote:

“Considering, however, that in Budapest most everyone was capable of detecting a Jew and also that most of those in hiding were not denounced, it is likely that at least a hundred thousand Gentiles gave active assistance to the Jews, while many more simply looked the other way.”

What was known about the fate of the deported Jews?  Not much. The utter stupidity of killing people instead of using them for labor in the war time was incomprehensible, and people refused to believe. Hitler told Horthy that he needed the Jews for the building industry. But in April of 1944, Walter Rosenberg and Alfred Wetzler escaped from Auschwitz and wrote a detailed report with drawings of the gas chambers, called “Auschwitz Notebook.” The Budapest Jewish Council headed by Samu Stern received “Auschwitz Notebook” no later than in the beginning of June, but the Council failed to deliver it to Horthy until the July 3.  Author Sándor Török, a Christian member of the Jewish Council, desperately trying to bring the document to the attention of the government, went to the state secretary in the Foreign Ministry who declared “that this was just Jewish hysteria and that the Jews exaggerated everything.”

On July 3, Sándor Török found a reader who believed him instantly. 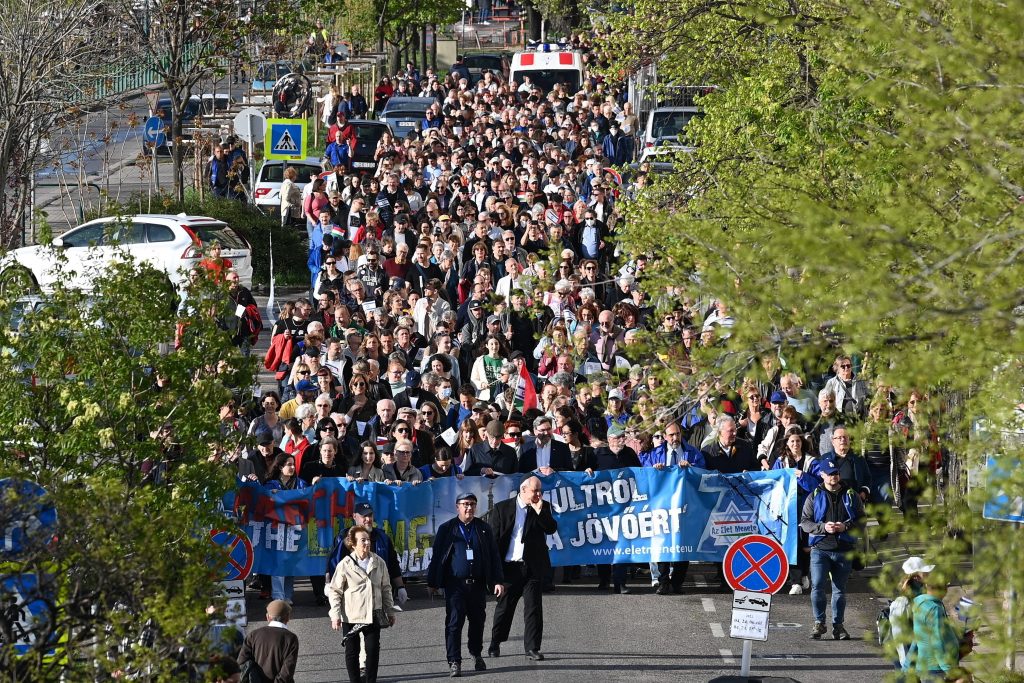 Victims of the Holocaust were commemorated at the March of the Living in Budapest on Sunday. The march started at a memorial on the Danube bank dedicated to rescuers and finished at the Hajós Alfréd Aquatics Complex on Margaret Island. Dani Dayan, the chairman of the Yad Vashem Holocaust memorial center in Jerusalem, addressed the […]
MTI-Hungary Today 2022.04.25. 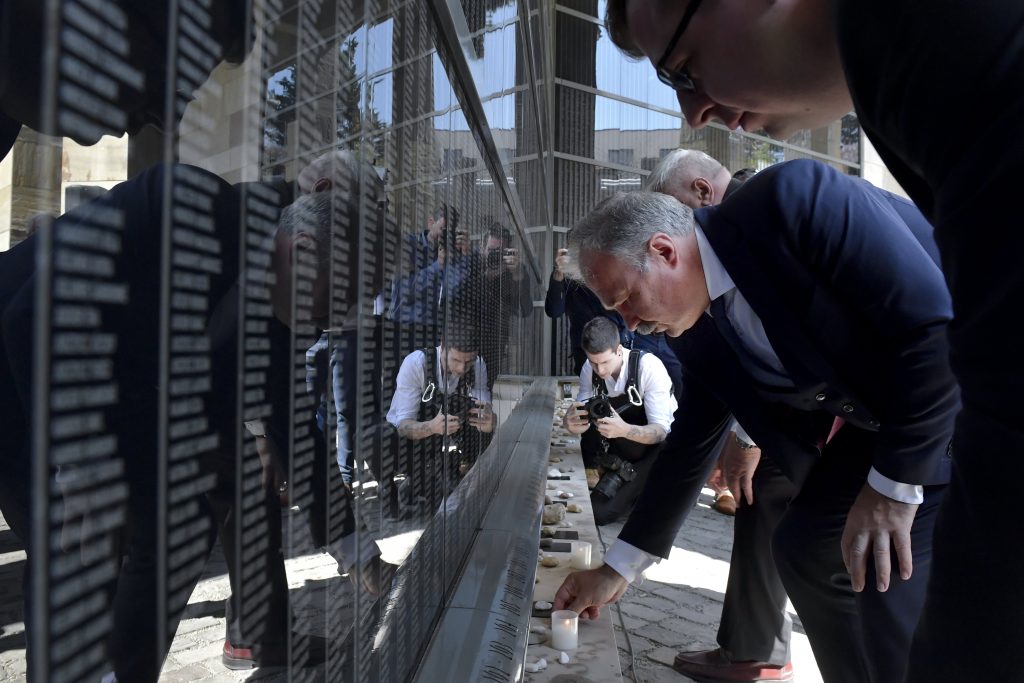 The Holocaust is significant for the whole nation because hundreds of thousands of Hungarians had been “ripped from the nation’s body”, Agriculture Minister István Nagy said on Wednesday, at an event marking the upcoming Memorial Day for the Victims of the Hungarian Holocaust. At the event held at the Holocaust Memorial Centre in Budapest, Nagy […]
MTI-Hungary Today 2022.04.13.