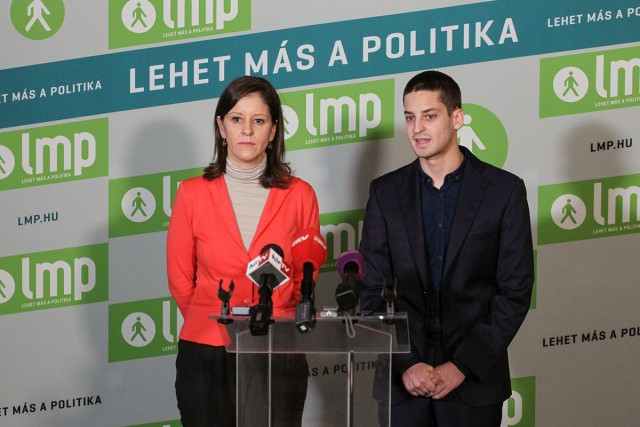 Green opposition LMP said it would initiate a national referendum on the upgrade of Hungary’s sole nuclear power plant in Paks. The party will soon submit its referendum question to the National Election Committee for certification, LMP co-leader Bernadett Szél (pictured left) told a press conference.

She said the new Momentum Movement’s signature drive for a referendum it had initiated on Budapest’s bid to host the 2024 Summer Olympics had proved that the Hungarian people would not allow the government “to make certain decisions over their heads”. Szél said the Paks upgrade needed to be put to a referendum because it was “an even riskier endeavour than staging an Olympics”. LMP’s referendum question reads: “Do you agree that nuclear power plants with greater electricity generating capacity than that of the nuclear power blocks currently operating in the country should not be made operational in Hungary?” Szél said her party would use “any peaceful means necessary” to block the Paks investment. Asked to comment on an earlier referendum initiative submitted in connection with the project by a Dialogue party MEP that had been turned down by the National Election Office on the ground that a referendum cannot be held in connection with issues governed by international accords, Szél said LMP would do everything it can to make sure their question passes. She said the question they are preparing to submit would only be “the first step”, adding that if it is rejected, the party would keep submitting referendum questions until one is approved.

LMP board member Péter Ungár (pictured right) said the government had proved during the signature drive for the referendum on the Olympic bid that it “intends to govern against the people”. Ungár insisted that the Paks upgrade lacked majority support. He said the reason behind LMP’s timing of its referendum initiative was that they could not expect the European Union to intervene in the project, as the European Commission is expected to close its last remaining infringement procedure against Hungary over the Paks upgrade, financed by a loan from Russia, next week. A referendum concerning a planned upgrade of Hungary’s Paks nuclear plant is “not just an opportunity but a must”, Antal Csárdi, LMP’s member in Budapest’s municipal assembly, said.  He noted that “the Paks upgrade is an even more serious issue than (Budapest’s) Olympic bid” because it also concerns the country’s sovereignty, let alone environmental and health risks. “People have the right to decide if they want to see Hungary once again depending on Russia,” Csárdi said. Csárdi said his party would submit the referendum initiative to the National Election Office next week.

Budapest-based think-tank Center for Fundamental Rights told news agency MTI that the National Election Office (NVB) would probably reject LMP’s referendum initiative because the Paks upgrade project is multiply bounded by international contracts. According to Hungarian laws, referendum cannot be held on such issues, it insisted.