DK to File Report over Assault against Representative

The leftist Democratic Coalition (DK) is filing a report with the police over the attack committed against a district representative, Ágnes Domokos, during a flashmob demonstration on Wednesday, party spokesman Balázs Barkóczi has said.

DK organised a flashmob outside the Academy of Music on Wednesday where Prime Minister Viktor Orbán was giving his speech commemorating the 1956 anti-Soviet uprising, Barkóczi told a press conference on Thursday. During the demonstration, Zsolt Bede, “editor and provocateur-in-chief of the Vadhajtások blog”, tore a sign from Domokos’s hand and hit her, he said, causing chest injuries.

Barkóczi slammed the attack “by Fidesz’s pocket provocateur” as “outrageous and appalling”, and called on “the justice system, society, and the right wing as well as the opposition” to condemn it. 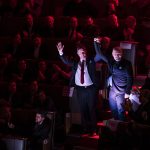