The Democratic Coalition (DK) finds the decision by the State Audit Office to suspend the party’s budgetary funding was politically motivated.

The Hungarian Audit Office (ÁSZ) has suspended budgetary funding for the opposition Democratic Coalition (DK) party, citing irregularities uncovered during its review of the party’s finances in 2017-2018. DK will not receive state funding until it has rectified its finances and proved that they are now in line with regulations, ÁSZ said.

According to the opposition politician, the “(Party) State Audit Office, led by former Fidesz MP László Domokos, has once again completed its task, which it had received from the authorities.”

Sebián-Petrovszki argued that although the receipts had burned down in a fire at the party’s headquarters, the budgetary funding would still be suspended possibly indefinitely, until they present the original documents, which is impossible.

Earlier, DK said that the State Audit Office had the copies of the documents that were destroyed in the fire.

Democratic Coalition will take every legal opportunity to prove that the Audit Office’s proceeding is unlawful, Sebián-Petrovszki emphasized.

However, contrary to previous press reports and DK’s statement, the State Audit Office says that there is a different reason for the suspension.

“We have already closed our investigation into the management of DK for 2017-2018 and found that the party’s reports did not reflect reality, Bálint Horváth, spokesman of ÁSZ told news portal Azonnali.

Horváth said that they were no longer asking for the destroyed documents, only the party’s basic financial documents for 2020, which could prove that they have the conditions necessary for legal operation.

According to Horváth, ÁSZ asked DK to restore its legal management, to which DK leader Ferenc Gyurcsány replied that this was a politically motivated attack, and he refused to take any actions.

“Should they meet the conditions, they will receive the suspended funding retroactively,” Horváth pointed out.

The documents sent by ÁSZ only specify that they need to “restore legality,” the politician said.  If this only applies to 2020, then there is no problem, he stated. 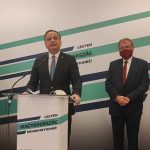