On This Day – In 1953 Hungary Trashed England In “Match Of The Century” – Video!

On 25th of November 1953, an international football match was played between Hungary and England, which has been regarded as the “match of the century” ever since. The previously underestimated “Mighty Magyars” won the game easily 6–3 in front of 105,000 crowd at Empire Wembley Stadium, teaching England a lesson about modern football, or at least what that term meant in the 1950s. Six months later the Hungarians beat England again, 7-1 in Budapest. 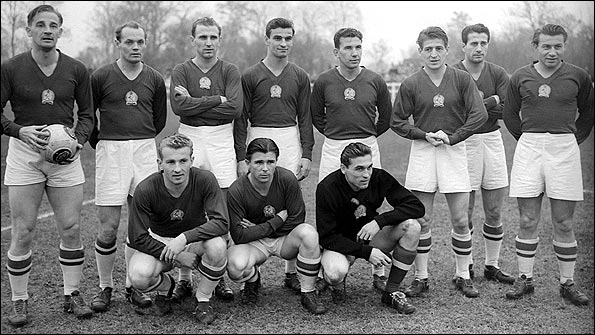 The famous clash of course was not only about football, from a political point of view it played important role in the symbolic showdown between Communist East and Capitalist West. From the people’s perspective, the Hungarian team became a symbol of the rebellion of an oppressed nation against their ruthless masters. As writer Péter Esterházy noted, for Hungary Ferenc Puskás and his teammates were the “heroes of the fairy-tale, who triumph where ordinary men cannot.” For England, the shocking result opened a new chapter in national football as English coaches started to look to the continent for tactical and training advances.

We saw a style of play, a system of play that we had never seen before. None of these players meant anything to us. We didn’t know about Puskás. All these fantastic players, they were men from Mars as far as we were concerned. They were coming to England, England had never been beaten at Wembley – this would be a 3–0, 4–0 maybe even 5–0 demolition of a small country who were just coming into European football. They called Puskás the ‘Galloping Major’ because he was in the army – how could this guy serving for the Hungarian army come to Wembley and rifle us to defeat? (Sir Bobby Robson)

Hungary has a respectable football history, having won three Olympic titles, finishing runners-up in the 1938 and 1954 World Cups, and third in the 1964 European Football Championship. In the early 1950s Hungary revolutionised the international football, laying the tactical fundamentals of Total Football with the remarkable Golden Team, which included legendary striker Ferenc Puskás. The Hungarian Golden Team has one of the longest undefeated runs in football history, remaining unbeaten in 31 games, spanning over 4 years and including matches such as the Match of the Century.