According to the Hungarian Parliament’s official calendar, the National Assembly’s vote on who will be Hungary’s President for the next five years will take place on March 13th, at 1pm CET.

In Hungary, the President of the Republic is a chiefly ceremonial position, one that is voted on by the National Assembly. In order to become a candidate for the presidency, hopefuls must receive the written support of at least one-fifth of all Members of Parliament.

Currently, there are two major candidates: current President János Áder has been re-nominated to serve for another term by the ruling Fidesz party, while the left-wing opposition parties have joined together to support legal scholar and former Ombudsman of the Hungarian National Assembly László Majtényi.

According to Hungarian news outlet Népszava, the ruling Fidesz-KDNP coalition chose March 13th, which is the earliest possible date for the parliamentary vote, for a very specific reason: it prevents Majtényi from speaking as a presidential candidate at opposition rallies on March 15th, the national holiday that commemorates the Hungarian Revolution of 1848.

Image via MTI and index.hu 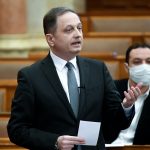 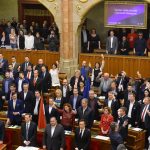