The number of patients confirmed to have contracted the new coronavirus in Hungary has increased by 56 to 2,998 in the last 24 hours, with another 5 new deaths reported, according to koronavirus.gov.hu, the official government information website for the epidemic.

Yesterday, the number of those infected was 2942. According to the government website, the total number of deaths caused by COVID-19 so far has reached 340 and there have been a total of 629 recoveries. Currently, there are 1005 patients being treated with the disease in hospital, 51 of whom requires ventilator treatment.

A total of 10,786 people are in official home quarantine and the authorities have taken 82,010 samples. The majority of cases were reported from Budapest, with 1473 positive cases, and the neighbouring Pest county (400), followed by Fejér county (300) and Komárom-Esztergom County (132). The smallest numbers were reported from Vas (14) and Békés county (16).

The website also noted that Hungary is currently in the phase when the virus is being transmitted in the community through personal contact, though the authorities are preparing for mass infections. They also warns that the number of people carrying and contracting the virus may be significantly higher than the number of confirmed cases.

Therefore, it is at utmost importance to comply with the recommendations and rules, and to increase the protection of the elderly and the chronically ill, even in the country’s second phase of the fight against the virus, which will begin next week with the easing of restrictions in the countryside.

Detailed data on the almost 3,5 million confirmed cases worldwide and deaths by country can be found here and here. 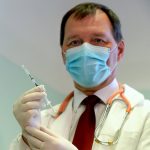