Ten players have been diagnosed with the coronavirus from the Váci NKSE women’s handball team, the club’s official website has announced.

The club said that the adult team of the Vác NKSE started training again on May 25th after a shutdown caused by the pandemic. Their association resumed training following all the recommendations and advice on restarting, which meant they had a blood test twice a week, which had come back negative for everyone every time. In addition, the team took players’ temperature every day, as well as those of the professional staff and they also practiced regular hand disinfection, reads the statement.

However, despite preventive measures, several players had symptoms of the coronavirus last week (loss of taste and smell) and, unfortunately, PCR tests also confirmed the suspicion: ten handball players have become infected. All members of the professional staff and other players tested negative.

The affected players are completely asymptomatic, but according to the rules, they will be quarantined for two weeks, which also means that work on the team can only start again after July 20th.

Resuming training will be preceded by further PCR tests as well as exercise and cardiology tests. 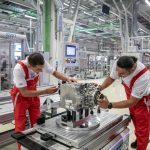