Protection measures against coronavirus entering Hungary from abroad must be in place, Prime Minister Viktor Orbán said in a radio interview on Friday, adding that every new infection in the country could be linked to a foreign “movement”.

Commenting on the upsurge of the epidemic in several countries such as Croatia, Serbia, Romania and Slovenia, Orbán said “Hungary is safe”, but protection measures against any reintroduction of the virus from abroad were needed. “Anything that happens in Europe affects us, too,” he said.

“We’ll have to contend with another tightening [of epidemiological rules] at home,” he added.

“We don’t yet know what this will look like,” he said, adding that the country’s operative board in charge of containing the virus had been given a deadline of noon on Friday to make a proposal on how Hungary should be protected.

More Lake Balaton, less Adriatic. And then the epidemic can be kept under control.”

The PM said the operative board had detected a foreign “strain” in each new infection in Hungary.

The prime minister said Hungary had resumed monitoring measures taken by Austria, where quarantine, testing and border controls were part of a combined package.

On the topic of the European Union’s recovery plan for rebooting the economy after the epidemic, Orbán said the loan package must be “fair and flexible, and should not be mixed with politics.”

The prime minister accused “big-mouthed liberals” in the European Union of having a tendency to threaten “anyone they don’t like” with financial sanctions. He called this “uncivilised” and a “dead end”.

Money that is tainted by ideology and politics “will surely be spent badly”, Orbán said, adding that political considerations should not be confused with economic decision-making.

The prime minister said any attempt to link the rule of law issue to the EU rescue package would inevitably turn into a political dispute. If the two became confused, there would be no relaunching of the economy and “no budget”, he added.

“I wouldn’t advise large EU member states … to try this now,” he said.

He said that by September, several countries that are richer than Hungary but more financially vulnerable may “fall to their knees”. Orbán referred to Portugal — whose Prime Minister is visiting Hungary early next week — Spain and France.

Referring to the loan package, he said Hungarians found debt “frightening” and they understood its danger and its “communist legacy”. “And when the communists came back in their modern form as socialists, this very same threat returned in 2002-2010 in the form of foreign currency debt,” he added.

The prime minister noted that Hungary could veto the EU. “But this should only be done as a last resort,” he said.

Orbán said there was a now chance to reduce the risk of borrowing by insisting that money should be spent on economic development. No constraints should be imposed on how the money is spent, he said.

The prime minister also touched on German Chancellor Angela Merkel’s recent comments that the German EU presidency would stand up for the principle of the rule of law and would speak out any time it is curtailed “even if we’re talking about Viktor Orban”.

“I would not be this energetic if I were the Germans,” Orbán said in reaction.

If we compare the state of the rule of law in Hungary to how it is in Germany then we might be the ones to come out on top.”

He argued that in Hungary it was “inconceivable” for constitutional court judges to be members of political parties, which was a common practice in Germany.

As regards the domestic economy, Orbán said Hungary had achieved a breakthrough in terms of the situation on the job market. Some 4.5 million people were employed in the country prior to the epidemic, which fell to 4.37 million at the low point of the crisis, he said. But unemployment has started going down again, the economy has begun adding jobs, “which is not just a short-term phenomenon”, the prime minister said. He added that the government’s response measures had saved more than one million jobs. By supporting business developments, the government has also helped create between 70,000 and 80,000 new jobs and some 90,000 people are employed as part of the fostered work scheme, Orbán said.

But, he said, because economic crises tended to have delayed effects that only show up 5-6 months later, the government was preparing for “another test around January”.

Concerning a recent court ruling handing a suspended prison sentence to Gabor Kaleta, Hungary’s former ambassador to Peru, for possession of child pornography, Orbán said Hungary needed to enact laws that addressed paedophelia, the exploitation of children, drug use and the dangers or the internet in a way that reassured parents.

Drafting, tightening and amending child protection laws will be one of parliament’s most important tasks in the autumn session “because we must protect our children”, he said.

He said the “lenient” ruling in the Kaleta case proved that neither the prosecutor’s office nor the courts were under the influence of the government, arguing that if they were “the punishment would have been five times as severe”.

“No punishment seems severe enough in a case like this,” Orbán said. He vowed that the court ruling would not be the end of the case, saying he did not want the country to feel as if its government were trying to explain why it was idle in a situation that demanded moral action. 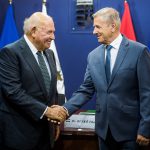