The opposition parties have called for talks between all seven parliamentary parties ahead of Monday’s plenary session in parliament, which is scheduled to discuss the bill granting special powers for the government to make the response to the new coronavirus epidemic more effective.

The bill, submitted to parliament by Justice Minister Judit Varga on Friday, would grant powers to the government to take steps and issue regulations ensuring the life, health and safety of citizens and the country’s economic stability.

The bill, which requires a two-thirds majority, would also envisage stricter sanctions on those breaching quarantine regulations and spreading fake news.

On Saturday, the opposition Democratic Coalition (DK), Jobbik, LMP, Párbeszéd and Socialist (MSZP) parties proposed talks with the government ahead of the plenary session, with all parliamentary groups participating. 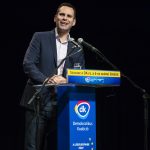