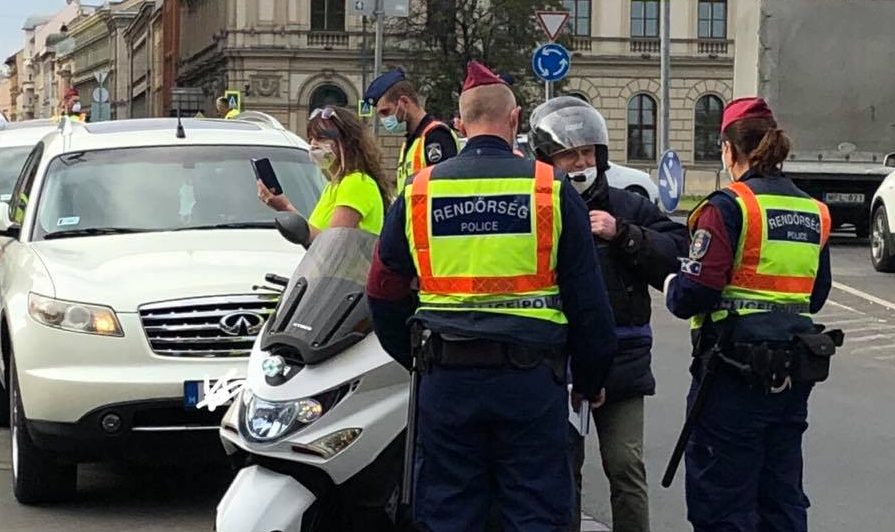 Police officers fined protesters who demonstrated at the head of the Chain Bridge on the Buda side on Monday afternoon at a ‘car protest,’ initiated by opposition party Momentum, and independent MPs Bernadett Szél and Ákos Hadházy, for “making sound signals without reason.”

This is the second time that the ‘car-honking protest” was organized in Budapest at Clark Ádám square, following last week’s demonstration on Sunday. The politicians initiated the demonstration because they think the government is mismanaging the epidemic response.

According to 444.hu, shortly after five o’clock on Monday afternoon, police initiated infraction proceedings against members of parliament, including Bernadett Szél and Ákos Hadházy. But lawsuits have been filed against several other participants in the demonstration for honking without reason, and they even fined cyclists for using their bike bells.

The purpose of the demonstration was to protest against the hospital evacuations, as in the recent weeks, Miklós Kásler, Minister of Human Resources, ordered hospitals to release 60% of their beds in order to prepare for the mass number of coronavirus infections. Protesters chose the Clark Ádám Square so that Prime Minister Viktor Orbán “could hear” the honking in his office at the Buda Castle as well.

According to index.hu, 5-6 cars were stopped, checked, and fined by police, almost immediately after the honking started. The police presence was much bigger than it was last week.

Hadházy, Szél, and the Momentum party condemned the police action in a joint statement. According to them, freedom of expression also extends to peaceful honking.