According to the head of the action group of the infection monitoring team of the Ministry of Innovation and Technology, the epidemic curve would go even higher, but it can’t, because the country has reached the limit of its laboratory testing capacity. Thus, less serious cases can no longer be identified. The consequences of this are not only that the number of daily new infections are not increasing significantly but also that forecasting the epidemic is becoming more and more difficult from the statistics, even though it spreads quite predictably.

The leaders of the group, doctor-epidemiologist Beatrix Oroszi and Gergely Röst, a mathematician at the University of Szeged, were guests of the InfoRádió Arena show on Friday night, talking about the number of tests carried out and the epidemic curve in the second wave of the coronavirus epidemic. Among other things, Röst talked about the fact that forecasting the epidemic is currently one of the most difficult issues, as the number of tests has not kept pace with the increased number of cases in recent weeks. Thus, the data reported on a daily basis cannot provide adequate guidance on what the real trend of the epidemic is and will be.

If the proportion of daily positive cases increases with the same number of tests, it can be assumed that there are more and more infected, but it is not possible to infer the actual increase of infections because it is not clearly related to the positivity rate. Röst also gave an example: if, for example, 800 out of 8,000 tests become positive, it cannot even be concluded that 800 or 1,000, possibly 1,200 positive samples would also be expected for 10,000 tests. 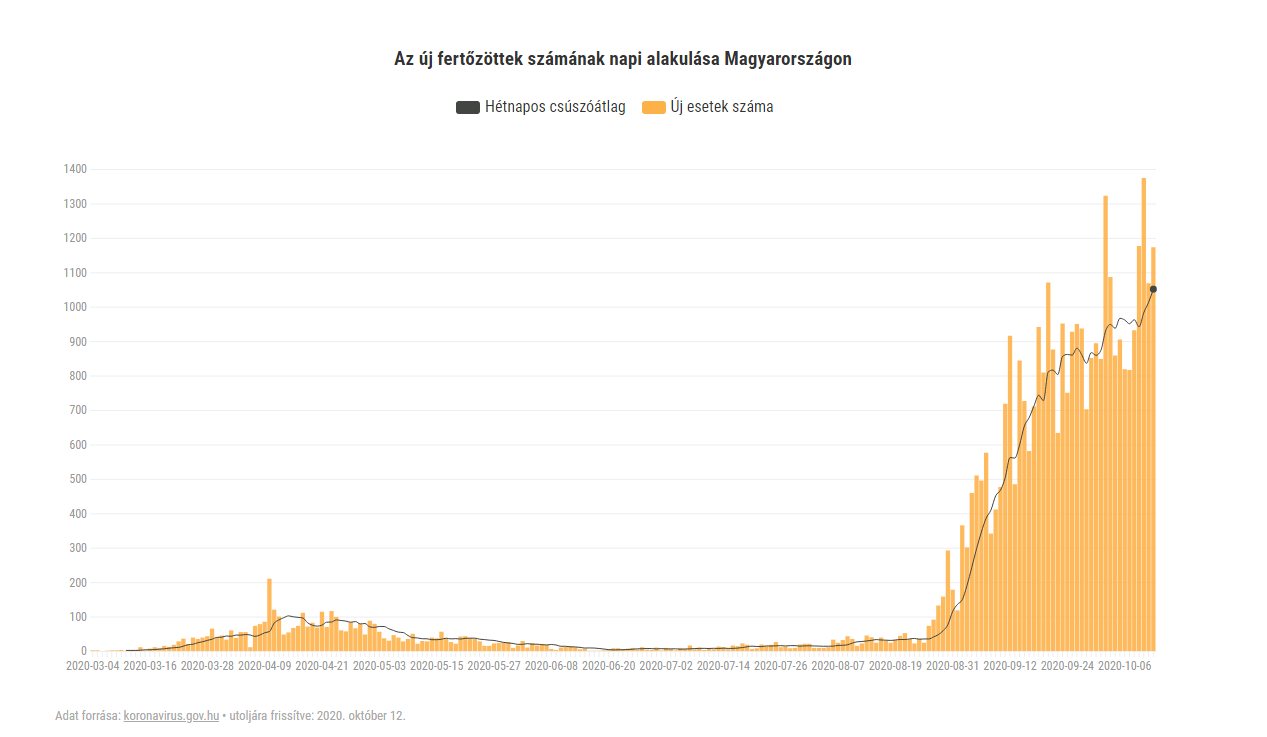 the number of newly infected patients in Hungary per day. (statistics via atlatszo.hu’s Koronamonitor)

Beatrix Oroszi, a staff member at Semmelweis University, said that there is a very wrong assumption that we have more positive cases because we are testing more. It would be true that there are more cases simply because of testing, while the epidemiological situation remains unchanged, if the positivity was also reduced accordingly. The problem, however, is that if the number of cases actually increases, then the upper limit of testing will also determine how much of all existing infections we will be able to detect, she explained.

Oroszi added that “the epidemic curve would go even higher, but it can’t, because the number of cases confirmed by laboratory tests is the basis, and the bottleneck is how many tests we are able to perform in Hungary in a week or a day. Therefore, the number of new cases is not growing because the epidemic is not progressing, but rather because our testing capacity has reached its upper limit.”

Oroszi also said in an interview with portfolio.hu that although “the virus is basically spreading predictably,” but testing capacity has really reached the upper limit with around 70,000 tests a week. She said the number of tests performed could also stagnate because the spread of the epidemic has slowed and we have reached a plateau, but if that were the case, the number of positive tests would be constant or declining. The reality, on the other hand, is that the proportion of positives has been steadily rising and is already above 10 percent. 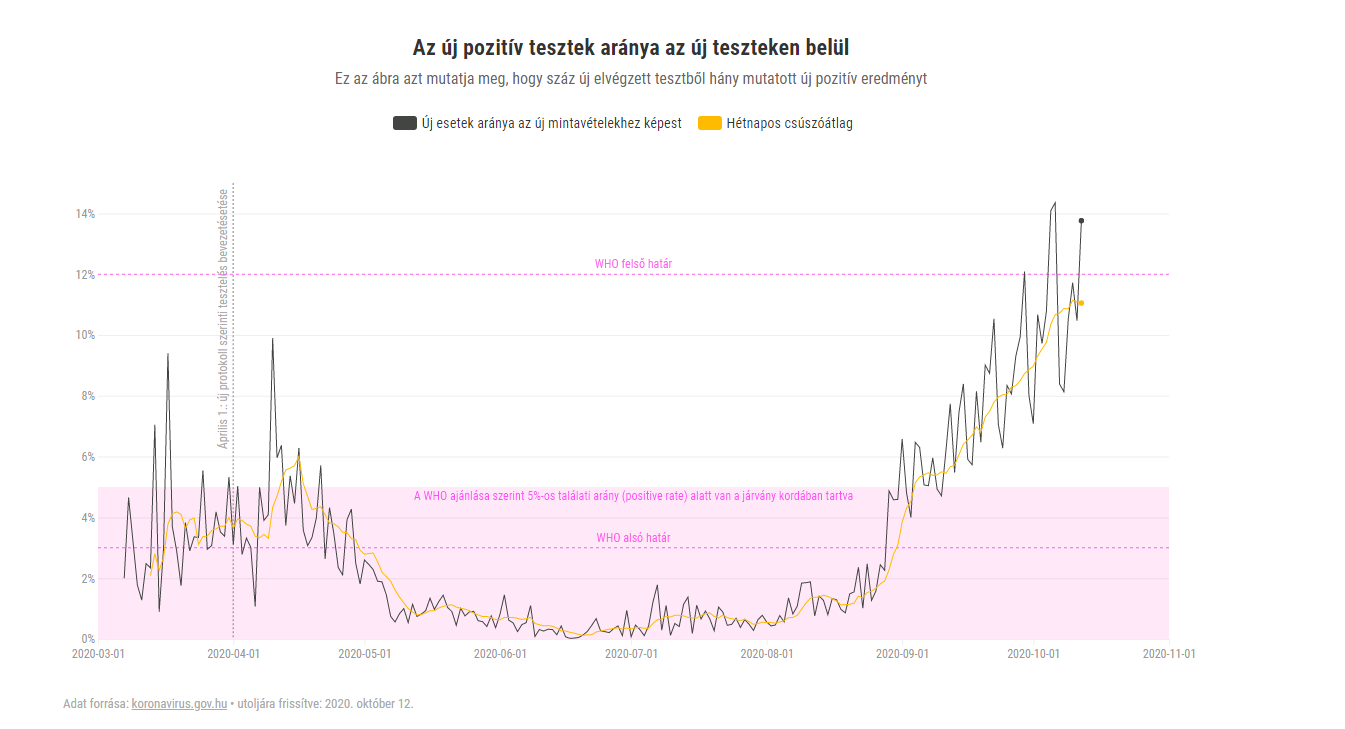 proportion of positive tests among the number of all new tests. (statistics via atlatszo.hu’s Koronamonitor)

As we have also reported earlier, this figure should be below 5 per cent as recommended by the WHO, but the rate has not fallen below the 5 percent limit since early September. Moreover, it has been above 10 percent for some time and has even reached 12 percent several times, exceeding the upper limit of the correct testing rate set by the WHO.

Oroszi says the daily number of cases will be useful data again if the rate of positive tests is reduced to below 5 percent. According to the research doctor, this is not an impossible mission at all, as it has also been done in Austria with a continuous increase in test capacity, even though in September they also exceeded the 5 percent limit. She added that “the fastest and best information about the beginning of the process, the spread of the epidemic, would continue to be the number of new cases per day if this information were based on reliable data.”

According to the latest data, 6,591 new cases were registered last week (until Friday), an increase of 1.3 percent from the previous week. The record of the number of new cases was broken over the weekend, with 1,374 new cases registered on Saturday. In comparison, the number of tests performed has not exceeded 13,461 per day since the onset of the epidemic, but the average for recent weeks has also been around 10,000.

While experts say the epidemic curve now shows nothing but little testing, the government and National Chief Medical Officer Cecília Müller have so far insisted that the number of tests continues to rise and there is no problem with this, adding that the epidemic is not progressing, but rather stagnating, as the number of cases does not increase.

However, at today’s press conference, Müller has finally admitted that although testing is “ongoing”, it is slower due to the spread of the epidemic. She also added that “the epidemic is ascending.” Müller emphasized that there is at least as much in front of us as there is behind us.

Meanwhile, Oroszi said that she thinks that if we do personal defense, central testing and contact research well, the epidemic trend can be reversed, but if it doesn’t, “sooner or later there will be nothing left but to restrict the measures and close the country.” In this case, we can expect a large wave of autumn-winter infections that are difficult to manage, so it would be very important to keep individual distance and reduce physical contact, wear a mask, and even introduce central measures such as banning all events.