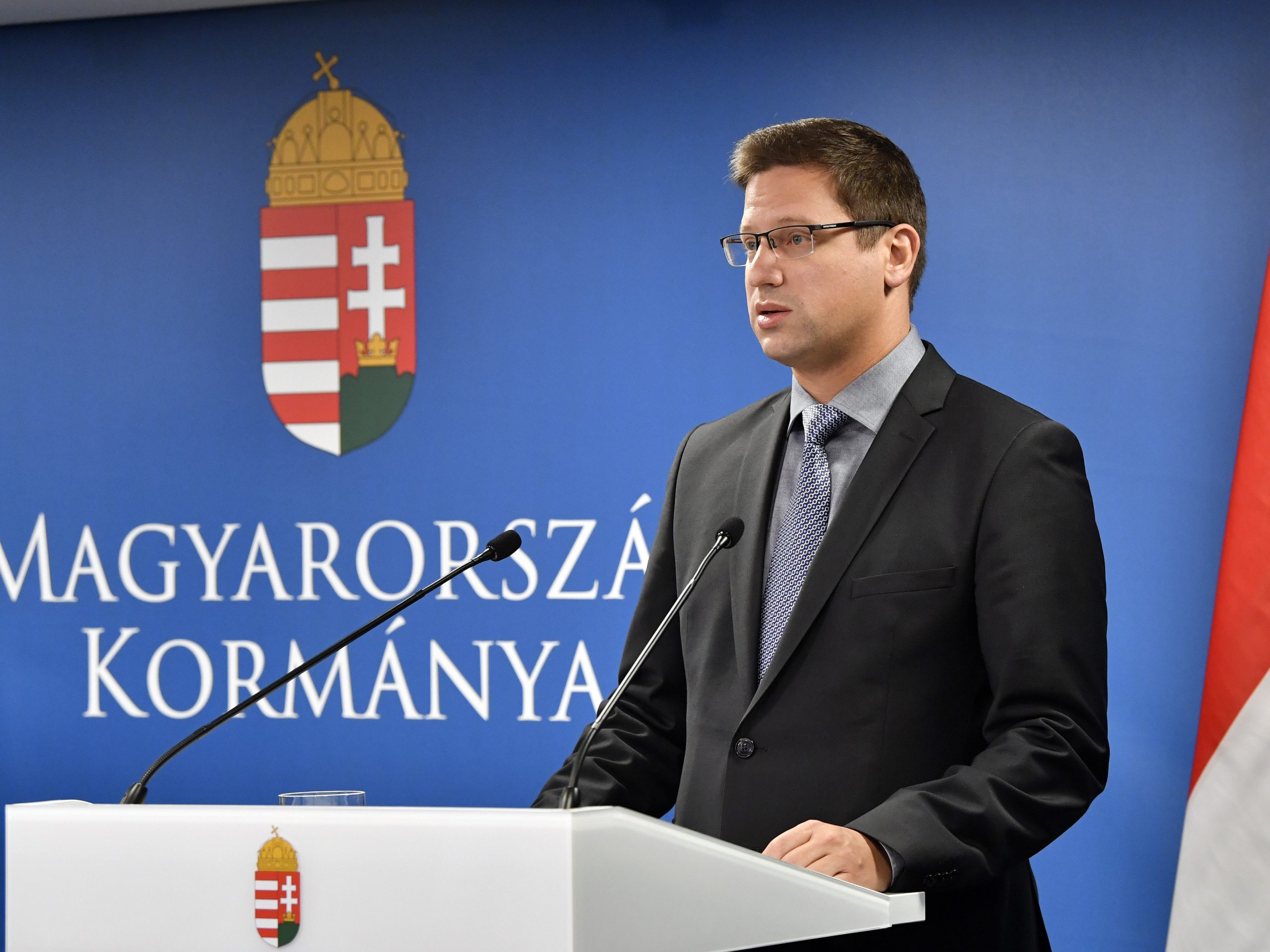 The conditions are in place in Hungary for effective protection efforts against the novel coronavirus epidemic, the head of the Prime Minister’s Office said on Friday.

Capacity is sufficient in terms of available hospital beds and ventilators, and there are reliable supplies of masks, gloves and other protective equipment, Gergely Gulyás told a regular press briefing.

He said the government considered the protection of people’s lives the top priority. The number of new infections is not the most important indicator, he said, adding that Hungary’s position, however, was good in European comparison.

One Covid-19 patient who was elderly and suffering from underlying illnesses has died, while the number of registered coronavirus infections in Hungary has risen by 718 to 10,909 over the past 24 hours, koronavirus.gov.hu said on Friday morning. This is the largest single-day increase since the epidemic began to spread. The number of fatalities stands […]Continue reading

The number of new infections is at a record high today but there has been no noteworthy increase in the number of deaths, he said. This suggests that the virus is less powerful than it was in the spring, he added.

He also said that an assessment of the results of the latest National Consultation showed that people considered it important to carry on with everyday life, protecting jobs and maintaining normal classroom education.

“Hungary must continue to function while making every effort to protect people’s lives,” he said.

The aim is not only to protect people’s health but also to maintain the operation of creches, kindergartens and schools, he added.

“Protection was successful against the first wave of the epidemic,” he said. “Everybody agreed in the summer that the greatest threat was importing the virus from abroad. This is why the borders were closed, and strict controls will be maintained in the future,” he added.

Hungary has overcome the first wave of the epidemic with the lowest loss among EU member states in terms of employment figures, he said. The unemployment rate was 4.7 percent in Hungary in June, as against a European Union average of 7.7 percent, he added. A total of 4.46 million people held jobs in July, Gulyás said.

The price of coronavirus tests will be set by the authorities in the coming days, Gulyás said. It will have to cover costs but avoid large profit margins to make sure it is affordable, he said. He noted that several companies had paid to test their employees, adding that government support for such testing “would be worth discussing.”

He said he supported Budapest Mayor Gergely Karácsony’s proposal to introduce a fine of up to 50,000 forints (EUR 140) for people not wearing masks in areas where it is mandatory.

Budapest’s mayor, Gergely Karácsony, is convening a special meeting of the Budapest General Assembly next Monday with a view to ramping up protective measures against the coronavirus epidemic. Proposals include tightening rules on mask-wearing and clamping down on people who refuse to wear a mask with stricter penalties, the Mayor’s Office said in a statement […]Continue reading

Regarding a UEFA Super Cup match scheduled to be held in Hungary before spectators on Sept. 24, Gyulas said the UEFA guidelines did not make it obligatory for Hungarian spectators to be tested. He added that he did not think the event presented a danger of catching the virus.

On the topic of the protection of teachers against the coronavirus, Gulyás said the school operator Klebelsberg Centre should exempt teachers above the age of 65 from teaching during the pandemic. Those quarantined for having been in contact with infected students should be tested, he said.

Commenting on the leadership change at Budapest’s University of Theatre and Film Arts and the ensuing demonstrations, Gulyás said the point of reforming higher education was to remove government influence from the sector. “We are not actors but passive spectators of the events,” he said.

Hopefully, he added, the university’s new leadership and its students would start talks and teaching would resume soon. That is in the interest of all parties, “except for anyone who wants to create political hysteria at home and around the world.” He praised the new supervisors of the university’s foundation as the “topmost professionals in the country” and said they should have the opportunity to prove their stewardship.

First, a kilometres-long human chain was formed, then the Sunday demonstration of around ten thousand gathered in front of the Parliament to protest the government-pushed new form of operation of the University of Theatre and Film Arts (SZFE). Positions, however, didn’t converge and SZFE’s main building is still under blockade, while Attila Vidnyánszky and the […]Continue reading

Meanwhile, Gulyás said Hungary’s economy is expected to contract by at least 3 percent in 2020 in light of the contraction of 6.1 percent in the first half of the year.

Regarding peace negotiations between Serbia and Kosovo, Gulyás called the EU’s common foreign policy “extremely weak”. The EU could have contributed to brokering a peace in the region but let the US take the lead there, he said. “The EU had done the absolute minimum in the region until Oliver Várhelyi was appointed commissioner of enlargement,” he said.

Hungary has allocated some 10,000 billion forints (EUR 28bn) for protection efforts against the coronavirus pandemic, of which 792 billion has already been spent to curb the spread of the virus and 2,000 billion on boosting the economy the minister said. 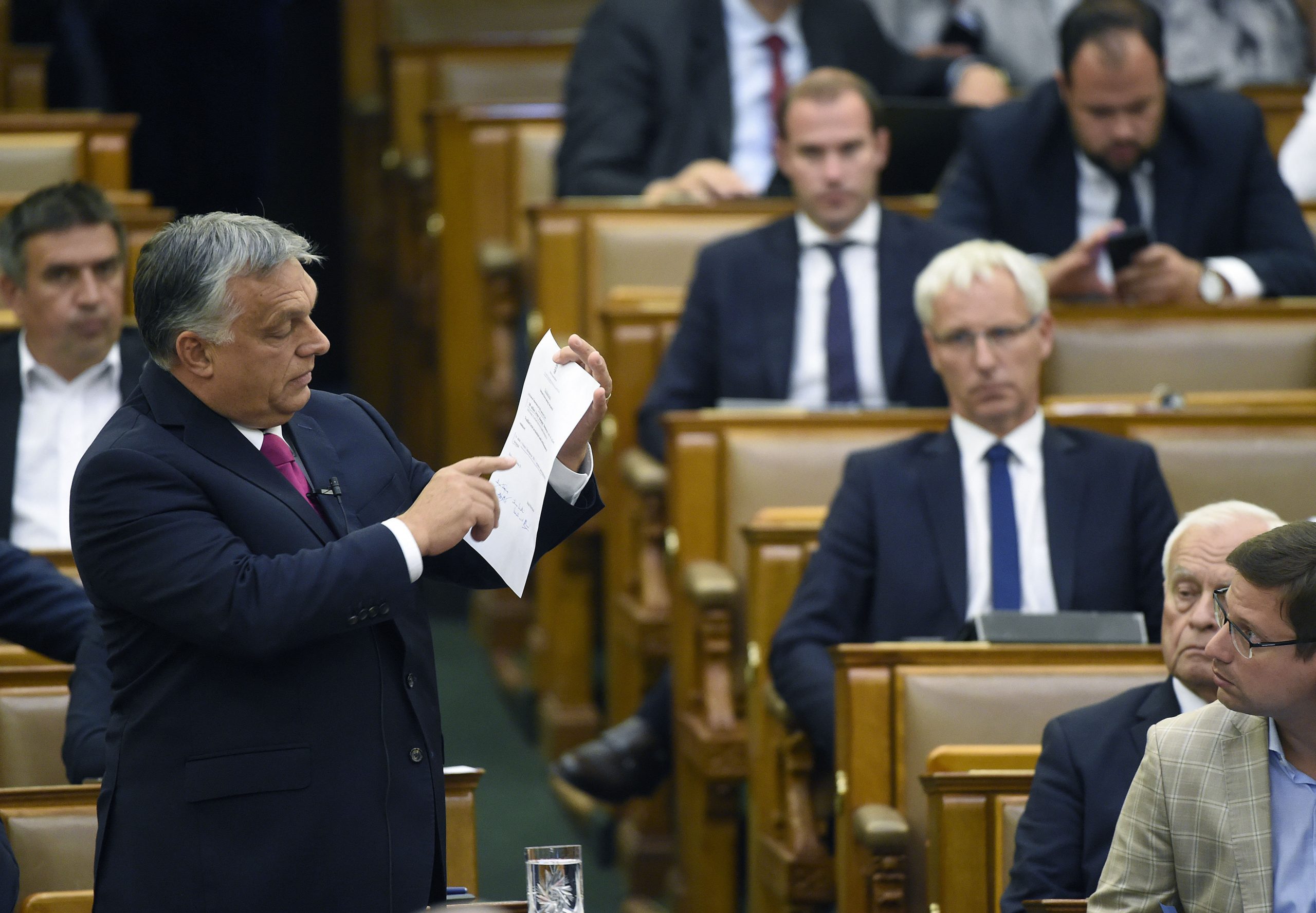 The government expects to be ready with a new two-year plan to boost economic growth by mid-September, Prime Minister Viktor Orbán told public broadcaster Kossuth Radio on Friday. In his regular weekly interview, the prime minister said he discussed economic policy measures with the relevant ministers and experts and asked them to combine their individual […]Continue reading

Introducing a moratorium on debt payments has covered 3,000 billion forints so far, Gulyás said. Two-thirds of companies and over half of private individuals have availed themselves of the moratorium, he said.

Capital and guarantee schemes have come to 2,100 billion while the central Bank has launched a growth credit programme to the tune of 1,500 billion forints, he said.

Hungary’s economy fared better than the EU average in the first half of 2020, but it has nevertheless contracted by 6.1 percent, Gulyás said, adding that boosting the economy, preserving jobs and disciplined protection efforts were all the more important, he said.