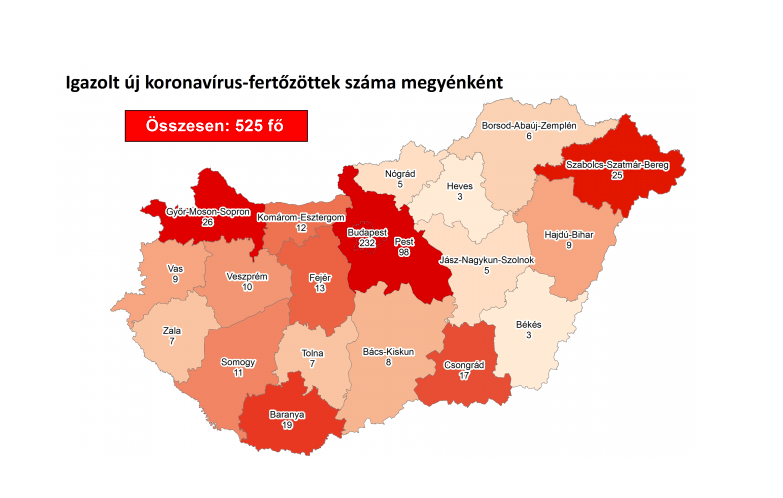 On Tuesday night, the government revealed the number of confirmed coronavirus cases by county on a static map on the official site, koronavirus.gov.hu, where the operational board informs the public about the disease. According to the map, there are confirmed cases in every county, but most of the patients are in Budapest.

Despite repeated requests from the press and the public, Hungarians have not been able to find out more information about those who tested positive for coronavirus for weeks, but yesterday, the government published data (underlying diseases, age, and gender) of those who died from the disease.

According to the official announcement, the aim of the move was to make the information about the coronavirus cases more transparent. At the same time as disclosing the details of the deceased, they promised that county data would soon be published as well.

Government Publishes Detailed Data on People Who Have Died from Coronavirus

These two data releases are a serious turnaround, as the operational board repeatedly rejected the idea to indicate in which counties and cities the confirmed patients live. Chief Medical Officer Cecilia Müller justified this by respecting patients’ personal rights and saying it would not be appropriate for a patient to be tracked based on their “sensitive, personal medical data.”

However, on Tuesday night, a static map was posted on the koronavirus.gov.hu website, showing how many confirmed cases there are in Hungary per county. The infographic shows that most of the patients live in Budapest, but there are confirmed cases in every county.

Out of the 525 confirmed positive cases, nearly half of those infected, 232 people, are in Budapest and an additional 98 in Pest county. After that, Szabolcs-Szatmár-Bereg and Győr-Moson-Sopron counties have the highest number of confirmed cases, 25 and 26 persons respectively. The smallest proportion of positive cases, only three, occurred in Heves County.

Örs Farkas, spokesman for the Government Information Center, told ATV that the information is being released from now on, because people are no longer able to spread the virus as they did prior to the stage of group diseases in the surrounding countries. So for the sake of transparency, in addition to the age, gender, and chronic illnesses of those who are deceased, the government now also made the information on county data available to the public.

The publishing of county data is also useful because it clearly shows that the whole country is affected by the pandemic, and measures and restrictions in order to help curb it need to be followed everywhere.