Unfortunately, epidemics are inevitable, accompanying phenomena of human history which have already caused humanity a great amount of suffering and claimed the lives of many people. However, we have always been able to fight the invisible pathogens through cohesion, discipline, and creativity. Analysis by Dániel András Vargha, student of the Medical University of Vienna.

Every year, many of us contract the flu, which is caused by the influenza virus. The symptoms are the usual, well-known ones every year: cough, headache, fever, and pain in the limbs. We stay at home for a few days, drink a lot of tea, take vitamins, and the illness is already over, and we can return to our normal lives. But not everyone is so lucky. According to statistics from the World Health Organization (WHO), between 290,000 and 650,000 people die each year from the influenza virus. In comparison, so far “only” 83,103 COVID-19 patients have died worldwide (data at the time of writing the article – Editor’s note).

So why are we that worried about this new disease? If we take a closer look at the data, we can clearly say that the lethality (the number of people who died from a certain disease/the number of people infected with a certain disease) for the flu is less than 0.1%, while for those infected with SARS-CoV-2, this percentage currently stands at 5.7%. In other words: this pathogen, which we are now facing, is 57 times more deadly than influenza. Of course, we can only draw lengthy conclusions after the epidemic has subsided.

Furthermore, it is also problematic and worrying that so far we have neither effective drugs confirmed by clinical research nor vaccinations in hand against the disease. Additionally, we already know the influenza virus pretty well, but we have only just started to get to know the new coronavirus.

What is the difference between coronavirus and influenza?

Viruses are basically genetic information (DNA or RNA) that are wrapped in a protein shell (capsid). Some viruses, such as corona- and influenza viruses, also have an additional double lipid layer. They do not have their own metabolism, which means that without us (the hosts) they cannot multiply. Influenza virus belongs to the Orthomyxoviridae family, and can be further divided into three genera: influenza A, B and C. These pathogens are characterized by two very typical surface proteins, namely hemagglutinin (H) and neuraminidase (N). These structures serve to adhere the virions to our cell surfaces, and also offer a lot of genetic recombinations: for example, the famous subtype H1N1 could develop from them, which claimed about 25-50 million lives between 1918 and 1920 under the name Spanish flu. As further examples, we could also mention the Asian flu (H2N2, 1957), the Hong Kong flu (H3N2, 1968) or the swine flu (H1N1/09, 2009). 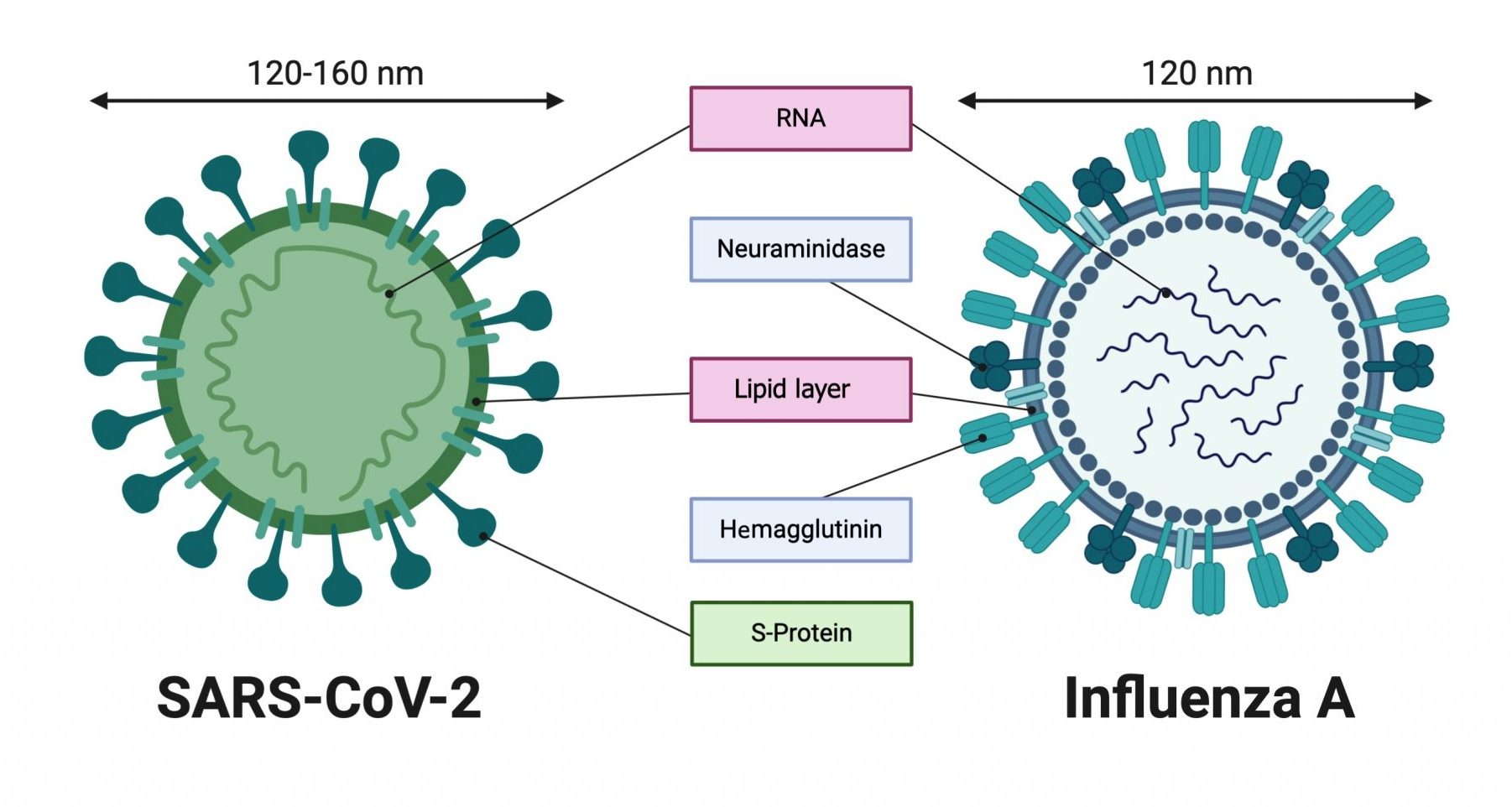 Difference between SARS-CoV-2 and Influenza A. (by Dániel András Vargha via Biorender)

There are numerous types of the coronavirus – which belong to the Nidovirales family – but most of them are not pathogenic to humans. Human coronaviruses were discovered in 1965 by David A. J. Tyrell in colds. He found these pathogens so strange that it was necessary to define a new family for them.

Coronavirus should appear familiar to us, as we have confronted it in 2003 as SARS-CoV, then later in 2012 as MERS-CoV. According to data from WHO, the previous emergence of coronaviruses infected 8,096 people, of which 774 died, and 2,494, out of which 858 died, respectively. 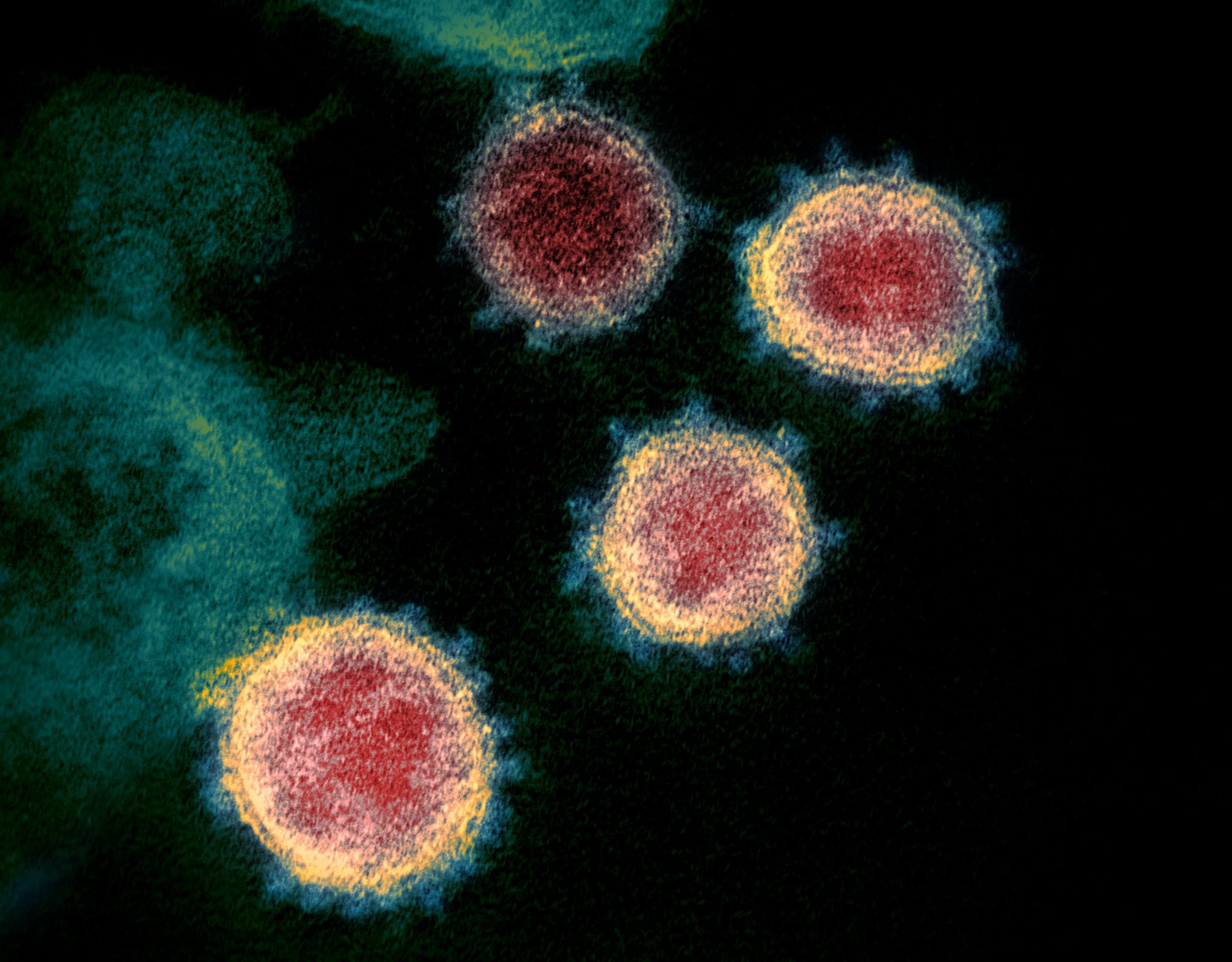 SARS-CoV-2 under an electron microscope. On the surface of the virus you can see the S-proteins (S=Spike), which are responsible for the typical crown (corona) appearance of the virus, after which it was named. Photo: NIAID

But what is the matter with the new SARS-CoV-2?

Due to the similar genetic properties with the SARS-CoV (2003), this new virus - which also belongs to the group of Beta-Coronaviridae - has been named SARS-CoV-2. Unfortunately, the difference between the two is that this new mutant form is much more virulent than its ancestor.

The new coronavirus first appeared in China, in the city of Wuhan, and from there it has spread all over the world in recent months. The majority of those first infected in Wuhan, were employees at the “Huanan Seafood Wholesale Market,” which is why it was suspected that the pathogens were transmitted from animals to humans. Results of current research also support this statement.

However, many rather claim that maybe we are unsuspecting “guinea pigs” of a biological experiment or even victims of a modern invisible war (just as it was described in Dean Koontz’s novel “The Eyes of Darkness.” Interestingly enough, in the book, published in 1981, the biological weapon is called Wuhan-400).

In reality, however, there’s really nothing new under the sun, as the origin of the earlier MERS epidemic could be traced back to a camel-disease. This phenomenon, which is called zoonosis, is not unusual in nature, for example, when we think of the cases of rabies or cowpox. So should we go back to the core of immunological research to find a possible cure for COVID-19? We already know that other animal species can also be infected with the disease, but what we still lack is the knowledge of whether the newly infected animals could eventually reinfect us. 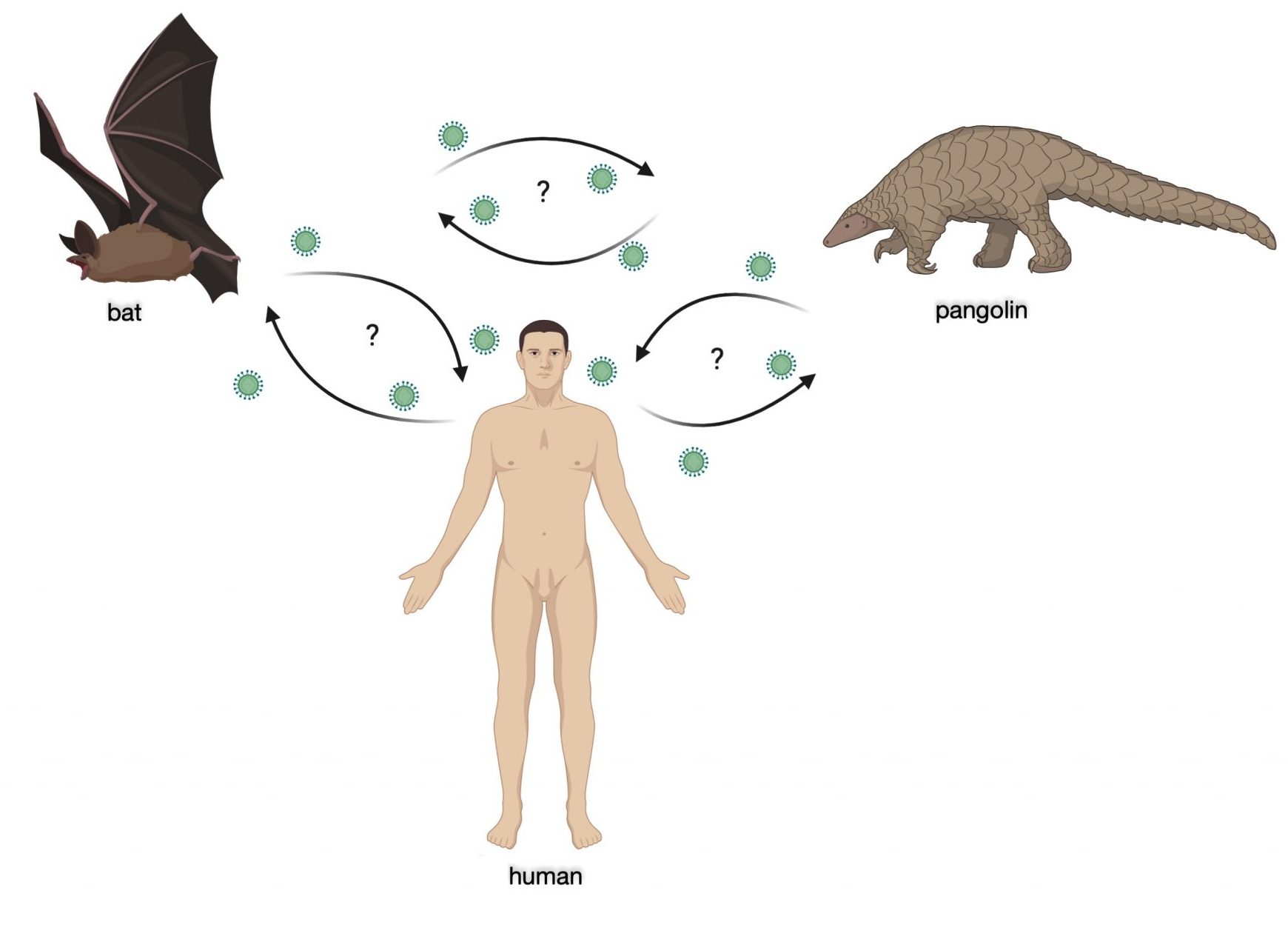 Possible zoonosis of the SARS-CoV-2. (by Dániel András Vargha via Biorender)

Why is it so dangerous?

As it stands in the name of the virus (SARS=Severe Acute Respiratory Syndrome), during the course of the disease, acute, severe lung failure can develop very easily and relatively quickly. The alveoli (tiny air sacs in the lungs that take up the oxygen) collapse because there is less breathing surface, so less oxygen can be absorbed and the blood circulation is also disturbed. The latter leads to increased stress to the heart (caused by the increased workload), and later to circulatory collapse. If patients do not get mechanical ventilation in time, then the chances of dying are very high.

Transmission and most common symptoms of COVID-19. (by Dániel András Vargha via Biorender)

Unfortunately, the symptoms hardly differ from the symptoms of a simple flu, especially at the beginning of the infection, which is why it is very important to carry out as many tests as possible, so those infected can be isolated in time and people could rule out any suspicious contacts and the further spread of the disease. We can take South Korea as an example, where a total of 466,804 examinations were carried out by April 6th, and as a consequence, in comparison to other countries, the spread of the disease slowed down and there are currently 10,284 infected and 186 fatalities.

Furthermore, it is also imperative to regularly test the healthcare workers so that the possibility of the spread of the disease (especially in healthcare facilities) can be further reduced. The question is: Who will take care of the infected people if the doctors, nurses and other medical staff get ill as well? With these simple measures, the overload and collapse of the healthcare system can be avoided. On the other hand, we shouldn’t just focus on the large number of COVID-19 patients. In addition to them, traumatic, acute cases, the chronically ill, and cancer patients, etc. also arrive in hospitals every day and need immediate medical care.

As we hear it every day on the news, from experts and the Operative Board responsible for the coronavirus epidemic, those who suffer from chronic diseases or immunodeficiency, or are older, are of course more at risk and have a greater chance of developing life-threatening symptoms. However, it should be noted that this statement applies to all infectious diseases.

According to the latest information, the incubation period of the coronavirus is 2-14 days, so you must always keep in mind that you can also infect others during this period without even knowing about your own infection. Because of this, it is advisable to wear a mask when you are among people, on the street, at work, or on public transport, so you can protect others from possible infection.

Moreover, the virus particles are very small (approx. 120 nm), and they can only be spread via aerosol, in the tiny droplets of the saliva. Of course, these droplets are larger than the virus particles themselves, so the mathematical possibility is greater that these sneezing drops can be stopped by wearing a mask than without. 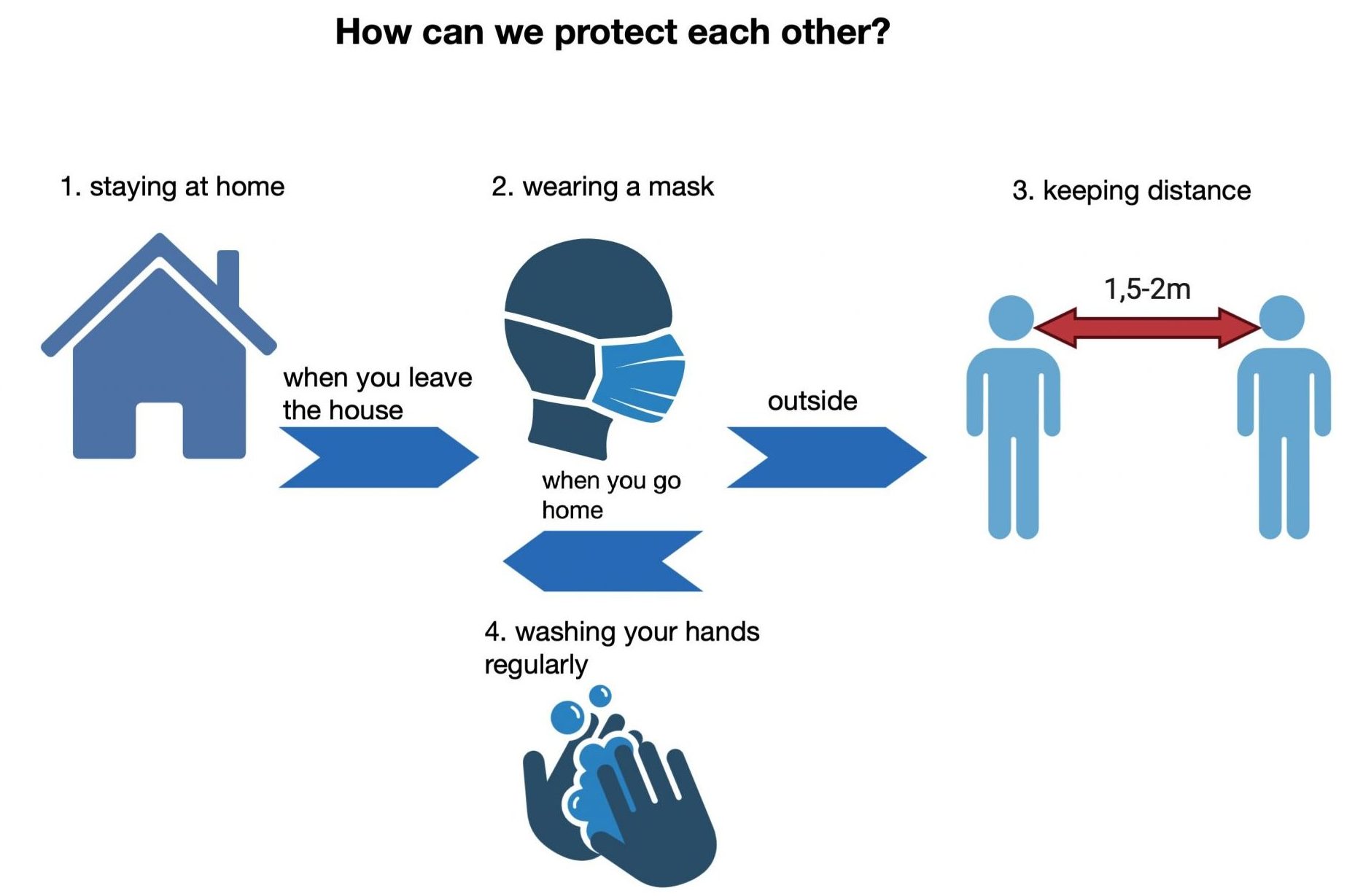 Cell membrane of SARS-CoV-2 has a double lipid layer, which is why the soap is very effective against it. Regularly washing your hands can destroy the virus particles effectively. (by Dániel András Vargha via Biorender)

It also seems that SARS-CoV-2 tends to mutate, as there are already 8 different strains of the virus in the world. Although this is unlikely to be an obstacle in the development of the vaccine, it cannot be ruled out that the COVID-19 disease will return in one or more waves.

In the upcoming second part of the article, we will report on, among other things, the most important diagnostic methods and the future treatment options for the coronavirus.

Written by Dániel András Vargha, student of the Medical University of Vienna.

Photos: via Biorender and Pixabay 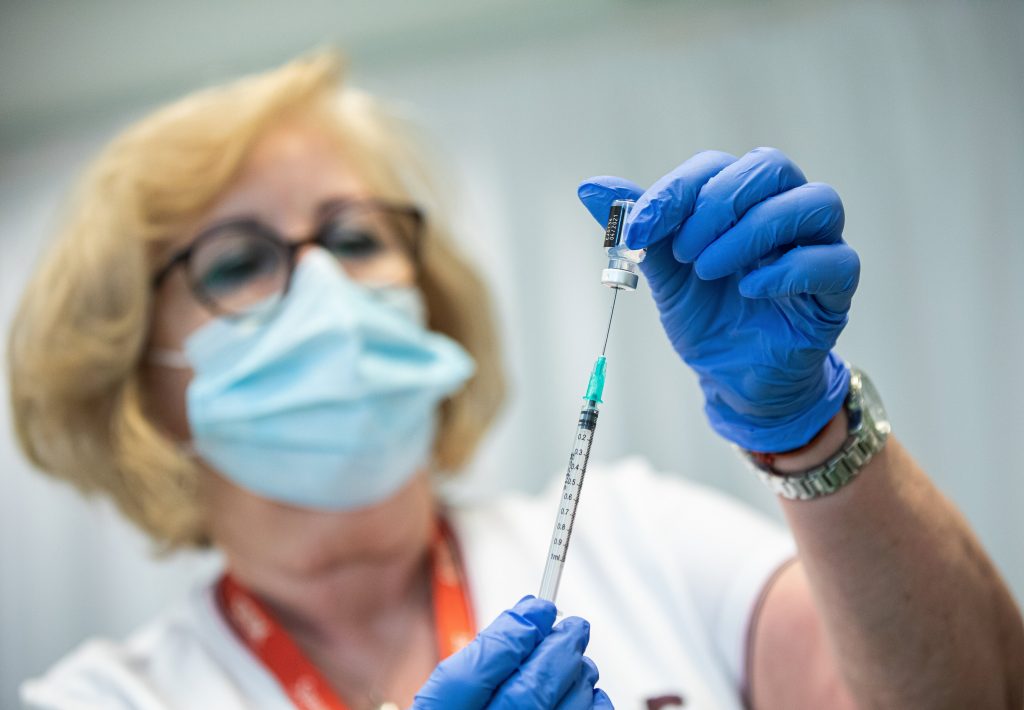 Hungary is altering its vaccination plan. Instead of ensuring that those who are inoculated once receive their second dose as soon as possible, the vaccination plan will now focus on ensuring that as many people as possible receive their first shot. This will lead to a greater number of people being vaccinated, but could prove […]
Tamás Vaski 2021.03.02. 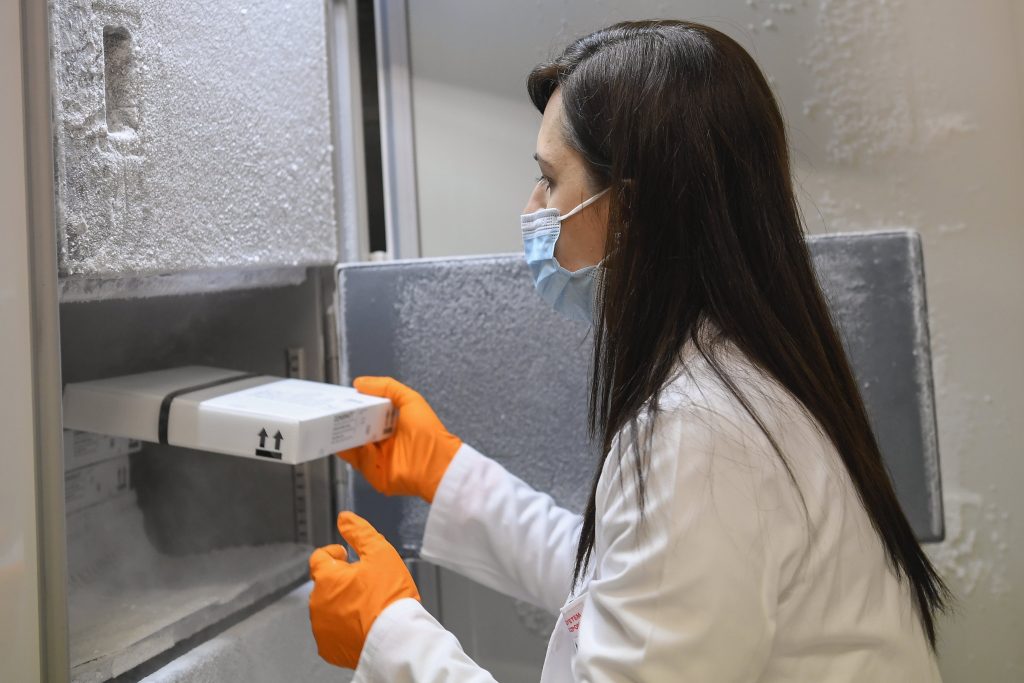 The latest, 11th, shipment of Pfizer-BioNTech vaccine — almost 115,000 doses — arrived in Hungary on Tuesday, bringing the total Pfizer jabs delivered to Hungary to over 850,000. The first shipment of the Comirnaty vaccine, the first to receive conditional approval in the European Union, arrived in Hungary on Dec. 26. New batches have arrived […]
MTI-Hungary Today 2021.03.02.