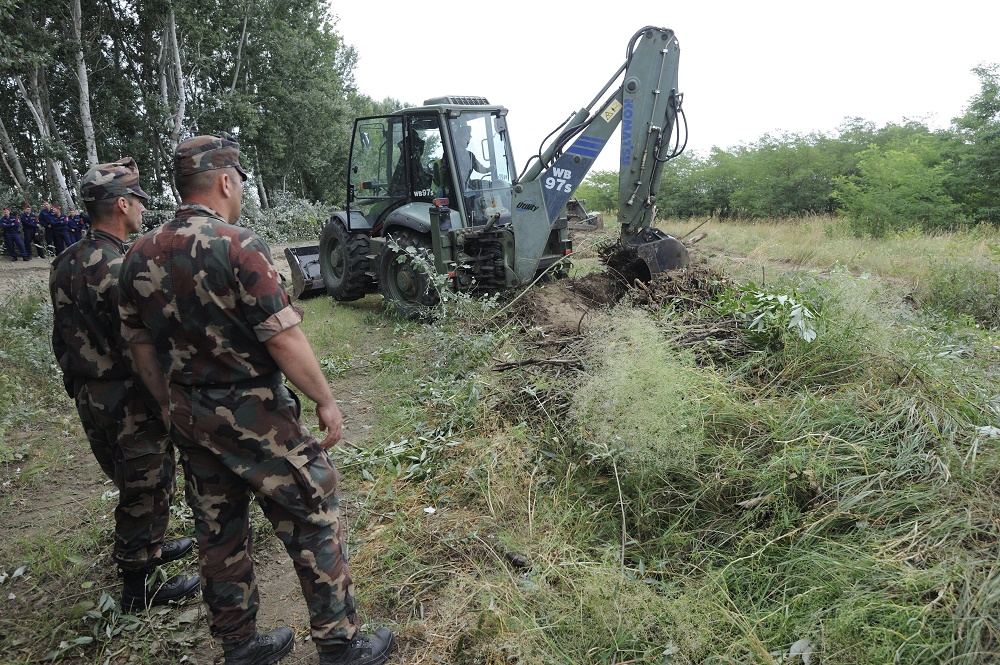 At 8 am on 13 July 2015, the Hungarian Defence Force, backed by police security, began the preparatory works required for the construction of the temporary control fence along Hungary’s border with Serbia. The construction work of the border fence has begun on the periphery of Mórahalom, the Ministry of Interior said. A total of 43 military personnel from the 5th Bocskai Infantry Brigade, the 37th Ferenc Rákóczi II Engineering Regiment and the 86th Szolnok Helicopter Base are currently involved in performing the task.

On 17th of June, the Hungarian government approved a decision on handling the increasing migratory pressure, in which it ordered the construction of a 175 kilometre long and 4-metre high temporary border control fence aimed at preventing illegal crossing of the green boundary along the Hungarian-Serbian border. The current phase of construction of the 150-metre sample section of the fence is being carried out jointly by the Ministry of Interior and the relevant bodies of the Defence Ministry. The soldiers brought technical equipment to the site using eight vehicles from the Hódmezővásárhely barracks. Following the inspection of the site, they will complete the field works – felling trees and removing undergrowth, groundworks and road construction – required to begin construction of the temporary border control fence, for which purpose they are using a track-laying bulldozer and a universal earthmover.

Building a fence on the Serbian border is a matter of urgency, the Hungarian government office chief said in June at a regular government press briefing. Referring to the harsh reactions the plans triggered in the media, János Lázár said that the Hungarian cabinet was “not happy” at all about building a fence between Hungary and Serbia. Guaranteeing the country’s security, however, requires that it must be done urgently, he insisted. Building the Hungarian-Serbian border fence is an urgent priority and it should be constructed as soon as possible, he added later. Illegal migration towards Europe has become a serious problem as an average of 1000 illegal immigrants cross the border into Hungary from neighbouring Serbia every day. According to the Hungarian government, 78,190 illegal border-crossers have been caught in 2015 so far, of which 77,600 entered the country via the Serbian border.