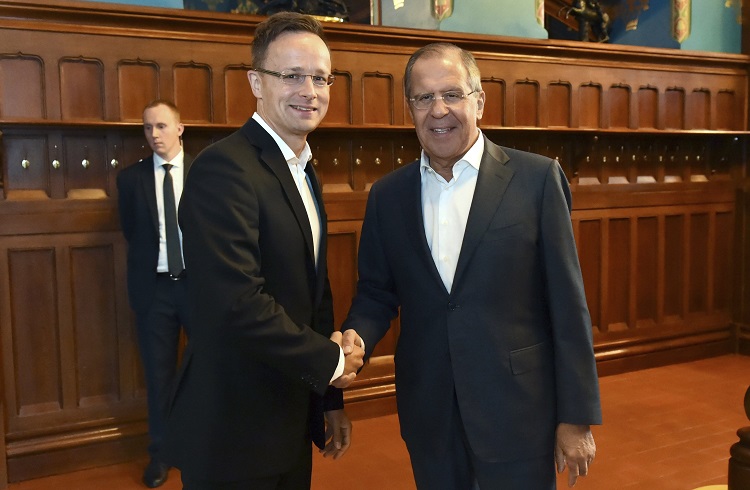 Hungary has a vested interest in Russian-US relations getting back to normal, Péter Szijjártó, Hungary’s foreign minister, told his Russian counterpart Sergey Lavrov in Moscow.

Speaking over the phone after a Monday meeting with Lavrov, Szijjártó said “history has made it clear for us that good relationships between East and West, between Russia and the US are in the best interests of central Europe, and that bad relations between the eastern and western powers do harm to our region.” The minister said that Russia is looking forward to the first meeting of Russian President Vladimir Putin and US President Donald Trump, at the Hamburg G20 summit. Szijjártó confirmed for Lavrov that Hungary has an interest in peace being restored in Syria which it sees as a condition for security in Europe, and that it appreciates all international efforts to that end.

Concerning North Korea, another issue on the agenda, Szijjártó said that Hungary considers that country a global threat, and sees a need for the international community to take concerted actions against Pyongyang.

Lavrov showed keen interest in the EU infringement procedure launched against Hungary in June because of its refusal to accept the EU migrant resettlement quota scheme. Szijjártó assured him that Hungary is prepared to withstand all pressure and is not going to let illegal migrants into the country.

The facts prove that the Hungarian government made the right decision when it decided to base its policy towards Russia on common sense and mutual respect, Foreign Minister Péter Szijjártó said. In Moscow, the Hungarian delegation led by Szijjártó signed a 500 million forint (EUR 1.6m) agreement for Hungary’s Dunaferr steelworks to buy modern machinery from a Russian company, which the minister said would further boost Dunaferr’s output, creating more jobs. Hungary and Russia also signed an agreement for a Hungarian company to build a sports and recreation centre in Chelyabinsk for 17.5 billion forints.

Bilateral trade turnover increased by 30% over the first four months of 2017 after declining over the past few years, Szijjártó said. Hungarian exports to Russia rose by 24% during the period, reaching 600 million dollars. The rise in exports was lifted by high value-added sectors, he added. Pharmaceuticals exports grew by 40% during the period, with Hungarian drugmaker Gedeon Richter becoming one of the top ten pharmaceutical companies in Russia by market share, Szijjártó said, adding that Richter’s investments in Russia have exceeded 100 million euros. Hungarian wheat exports to Russia grew by 88% over the first four months of the year, the minister said. Szijjártó also said that investments by Hungarian oil group MOL in Russia have reached 1.3 billion dollars, adding that the company had prepared a new development plan for its oil fields in the country.

The Hungarian minister also touched on the tourism sector, noting that the number of Russian tourists visiting Hungary had grown by 39% and had exceeded 50,000 over the first four months of the year. Szijjártó said he expects a further increase in tourist numbers after the relaunch of direct flights between Budapest and St. Petersburg in August.