According to Hungarian wire service MTI, construction of a new building to house the collections of Budapest’s Museum of Ethnography will start in the City Park (Városliget) in the latter half of 2017.

The ministerial commissioner of the Liget Project, a plan to renovate the City Park, told the Hungarian Parliament’s cultural committee about the plans on Wednesday.

Baán also addressed the concerns and protests surrounding the Liget Project, as the plan has been the subject of considerable controversy, with opposition politicians as well as activists and members of the public expressing concerns about what the proposed project will do to the city’s most important green space. In particular, the group Ligetvédők (City Park Defenders) have been protesting the Project’s felling of thousands of trees within the City Park, which they feel will lead to an environmental disaster. In addition, the group has expressed concerns about the idea of transforming the Park into a Museum quarter, as this would, in their view, lead to the end of the City Park as a true green space.

Referring to concerns around felled trees and construction in the popular public park, Baan said that “the green area will grow calculated by any methodology” and insisted that “one third of the park is now covered with concrete”. The commissioner added that the City Park’s neglected flora would also be renewed.

Continuing, Baán said that the the City Park Theatre, destroyed in 1952, will be rebuilt as a children’s theatre according to the original design. In addition, the House of Hungarian Music – Bartok Centre, designed by Japanese architect Sou Fujimoto, will replace the Hungexpo office buildings just outside the park. He also said that the new National Gallery building, which will be designed by Japanese architectural firm SANAA (Sejima and Nishizawa and Associates), will replace the recently demolished Petőfi Hall.

Baán added that renovations to the Museum of Fine Arts, which is located on nearby Heroes’ Square, and of which he is director, will be completed by the end of 2017. The museum has been closed due to renovations since February of 2015.

You can view a video of the Liget Project’s planned alterations to the City Park below: 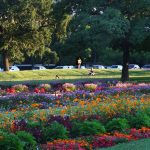