Polgár, who topped the women’s world ranking for 25 years and triumphed in two chess Olympiads, has invited kids from all around the world to participate.

Since Sept. 1, about 4,000 kids have turned up at the online chessboards to test their skills. Polgár said she hoped that at least 20,000 children would enter for the competition by the Oct. 5 deadline.

“I would like to write chess history with young players. The record attempt may once again demonstrate how chess connects people globally,” Polgár, who retired from competition in 2014, said.

The winners of the Oct. 19 final will be given an opportunity to play with Polgár. 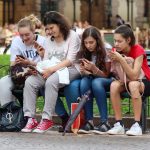