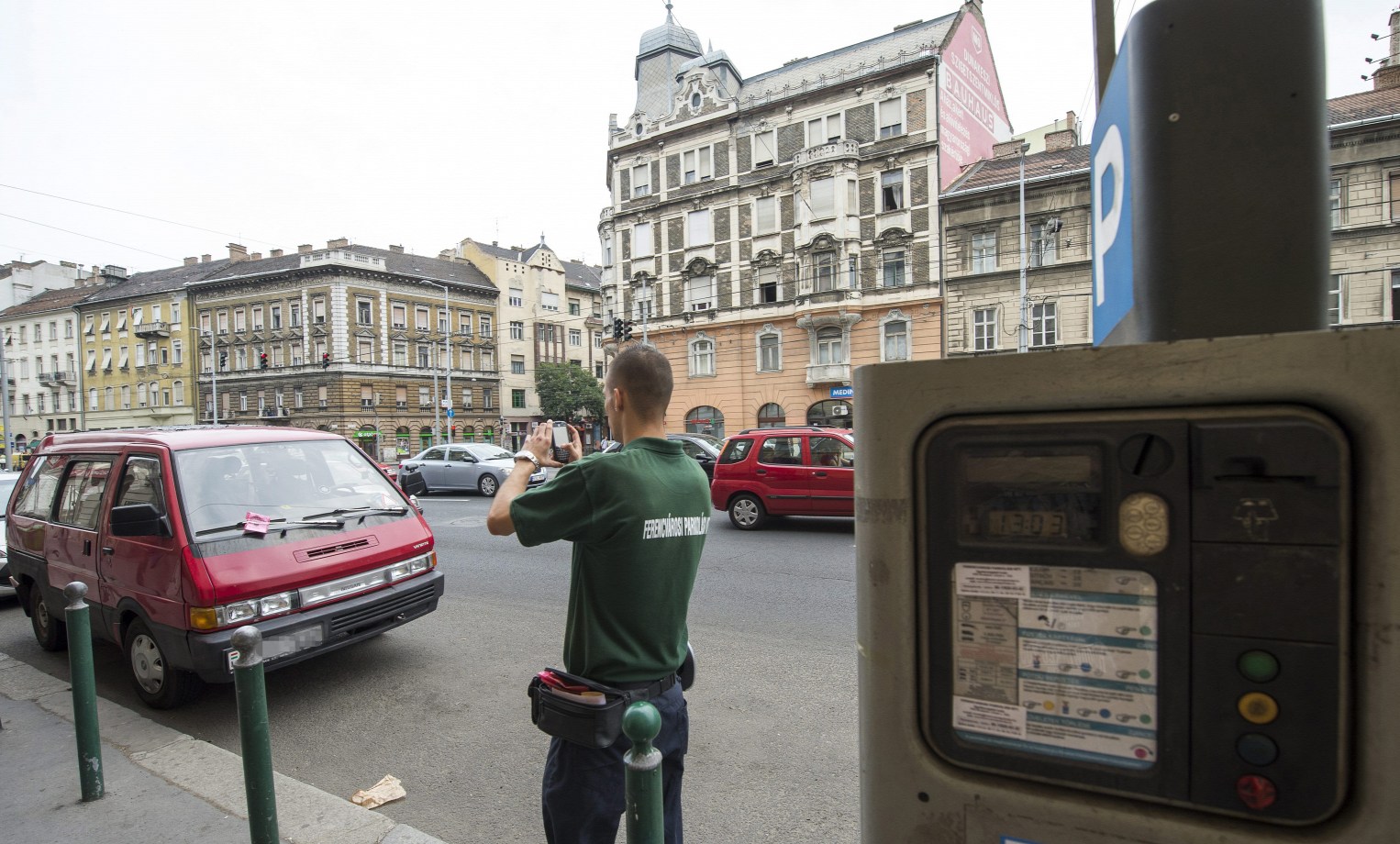 The Budapest Assembly on Wednesday voted to move towards a unified parking system in Budapest and set to reform the chaotic system that has been full of abuses and shady background dealings. A long-desired step, whose fate is, however, dubious, given the deeply-rooted interests and countless failures of the past.

Most importantly, from next July, local council service providers will be exclusively authorized to oversee parking fees and collect fines, instead of subcontractors. Also, there will be fewer machines, placed at a maximum distance of 250 meters instead of the formerly set 75 meters. Currently, 60-80% of the drivers tend to settle the fee through the electronic system, which is also cheaper than operating the machines – another strong point for the argument that cash payments are more costly, and more prone to being abused. Meanwhile, fewer machines will make life more difficult for those who don’t have a smart phone or reluctant to use it for parking.

In parallel, due to the potentially increased distance, the grace period would be raised to 10 minutes and they would also move towards the reduction of the convenience charges for mobile payments.

When Fidesz came to power in 2010, it had implemented a similar law, which didn’t prohibit local governments to entrust subcontractors. As a result, in many districts, the cost of the parking system operation became increasingly expensive, with parking companies employing a number of subcontractors for every task.

As liberal 444.hu‘s 2018 investigation pointed out, besides obvious irregularities (parking tickets without serial numbers, etc.) behind the parking companies, members and allies of Centrum Parkoló Ltd. could be found. The consortium, which among others (24 defendants in total) now face criminal charges, are suspected to cause a financial loss of 3 billion HUF (Eur 9,1 million) to the districts through its impenetrable network of sub-contractors and companies, in addition to other crimes like false invoicing and tax evasion. 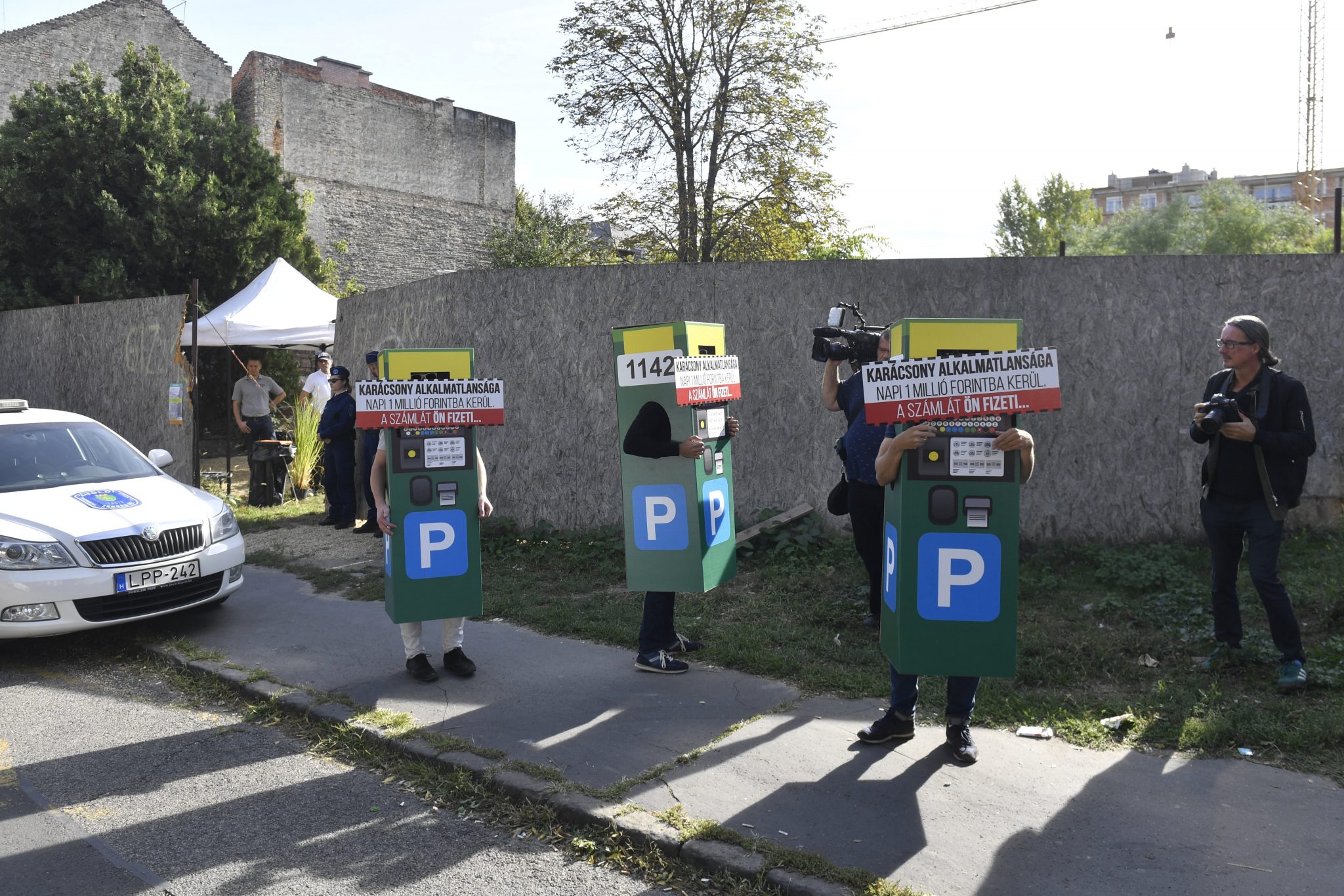 Fidesz youth organisation Fidelitas protest against Karácsony in the campaign, while Fidesz representatives were also likely involved in dubious background deals in the district. Image by MTI/Zoltán Máthé

A similar case to the one in the 9th district with similar protagonists, has been uncovered in Erzsébetváros (7th district) too. Long story short: a loss-making or parking system with suspicious subcontractors, among them the aforementioned Centrum Parkoló Ltd, eventually results in lack of public funds at the end of the line.

Even new Budapest mayor Gergely Karácsony found himself in the middle of controversies about parking and proved unable to solve the complex and questionable situation in Zugló (Bp’s 14th district), of which he was previously mayor. Since its implementation in 2017, parking generated loss in the district, Karácsony abstained at a vote for a subcontractor, which he himself handed in. Meanwhile, the application of a company with a better offer had previously been dismissed. Despite Karácsony’s abstention, Fidesz and MSZP representatives together voted for the more expensive one, and although Karácsony had the chance to veto it, he eventually decided not to.

He later argued that he knew the parking contracts had been “the result of a dirty bargain,” referring to a potential Fidesz-MSZP background deal. He also admitted the district parking system was unprofitable but he said the district authority had forced him to sign the contracts nevertheless.”

Not surprisingly then, parking was one of the leading topics of the campaign preceding the municipal elections. In fact, Budapest’s former Fidesz-KDNP-backed mayor István Tarlós, had also pointed out that he was unable to reform parking during his 10 year term. In a March interview with conservative but government-critical Válasz Online, Tarlós said that “It’s not okay what’s going on today. I also hear about dealings, alleged abuses,” adding that “I would love to change these conditions. I don’t agree that the capital’s parking works in twenty-three [referring to the number of the districts] different ways.”

He, however, also revealed that his famed agreement with Viktor Orbán would originally have included 16 points, but while 15 were okay-ed by the Prime Minister, Orbán rejected the 16th, a solution for the parking chaos. According to Tarlós, Orbán argued that a final solution “would lead to barely manageable political tensions in the districts.” After Tarlós’ interview, they had finally come to terms regarding the centralization of the Budapest parking system. But due to the local election results, the decision fell on the new city council.

Now that the Budapest assembly has decided that local council service providers will be exclusively authorized to oversee parking fees and collect fines, the situation is changing. At the debate, Gergely Karácsony argued that having passed just weeks after the elections, these are only initial steps, he will do anything to implement a unified and clean parking system in the capital. However, it is still unclear if a more transparent and operable parking system can be created in Budapest, as districts have had strong interest in collecting parking fees or worse, their leaders were interested in making their own deals.