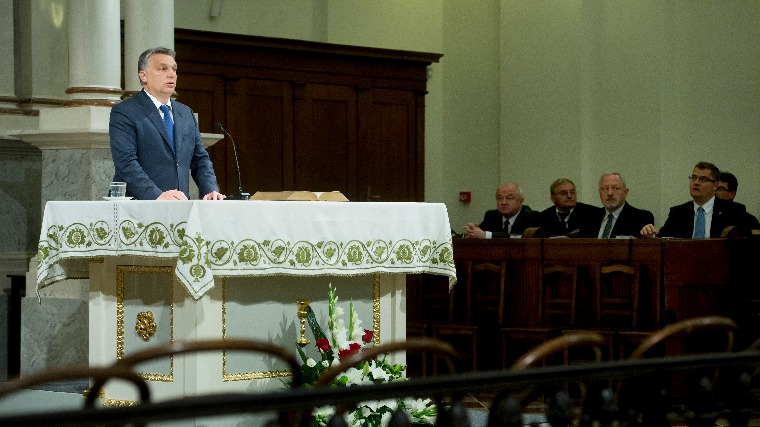 Hungarian Calvinists “know the path to the survival and endurance of Hungarians in the Carpathian Basin”,  Prime Minister Viktor Orbán said at a service in the Reformed church on Kálvin tér in central Budapest to mark the meeting of the church’s General Convent.

“We have been given the task to seek the path that leads to the survival and endurance of Hungarians in the Carpathian Basin”, the Prime Minister said. “Hungary’s Calvinists know this path. This is what their history bears wittness to”, he pointed out in his speech.

“We are living dangerous times that put the strength of all of us to test”, he said, adding that while Europe is busy with the tides of migration and financial disputes concerning Greece, weapons are still being fired in eastern Ukraine and numerous ethnic Hungarian families live from one day to the next in the country’s Transcarpathia region while the community’s men still have to fear being mobilised for a conflict in which they cannot see their interests. “In Transylvania, authorities have begun a campaign against Hungarian Calvinists that is reminiscent of the darkest times of Communism”, he pointed out.

Speaking of the future that awaits the Hungarian nation in the Carpathian Basin, he said that the task is to “survive and persist amid wars which have broken out all but without our involvement and through which we have nothing to win but everything to lose”.

The General Convent is the common representative body of Hungarian Reformed churches in the Carpathian Basin. Beyond Hungary, substantial communities of ethnic Hungarian Calvinists live in neighbouring countries, primarily Romania and Ukraine.