Hungary’s capital unveiled its UEFA EURO 2020 host city logo in the presence of UEFA President Aleksander Čeferin on Wednesday. Budapest is one of 13 cities across Europe that will stage EURO matches in four years’ time – marking 60 years of the EURO – and will host three group stage matches and a round of 16 encounter. 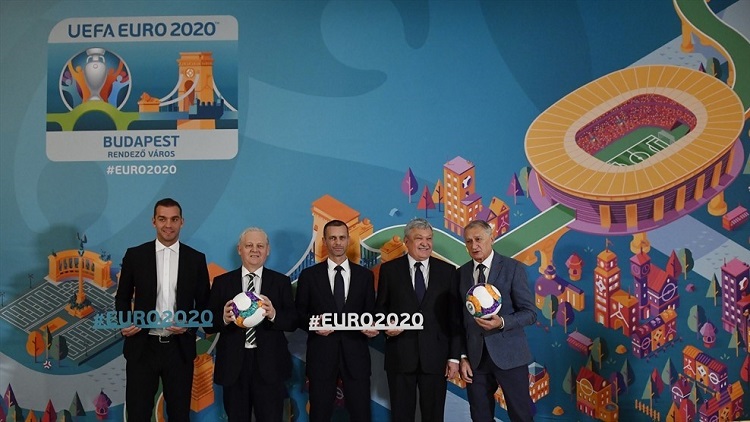 The aim for 2020 is to build bridges between nations and fans, and each city’s individual host city logo features a famous bridge from that city. The Budapest logo portrays the renowned Széchenyi Chain Bridge which spans the River Danube.”It is our duty to connect all the fans of Europe as, although we may be different from each other, we share the same European values,” said Mr Čeferin, who revealed at the event that his great-grandfather was Hungarian. “Budapest will be a fantastic host,” he added, emphasising the “enormous efforts” being made by the Hungarian Football Federation (MLSZ) to develop the country’s football at all levels.

MLSZ President Sándor Csányi also expressed his pride. “I truly believe that UEFA EURO 2020 will inspire younger generations to join the football family,” he said. “Not just in Hungary, but all over Europe.” Budapest’s mayor István Tarlós underlined the passion that Budapest and Hungary holds for sport. “The capital will welcome visitors and football fans with great pleasure,” he reflected. Both Antal Dunai – an Olympic football gold medallist with Hungary in 1968 – and recently retired international defender Roland Juhász, who has been capped 95 times by his country, were unanimous in the view that “UEFA EURO is an unforgettable, unique experience for every football player and fan”.