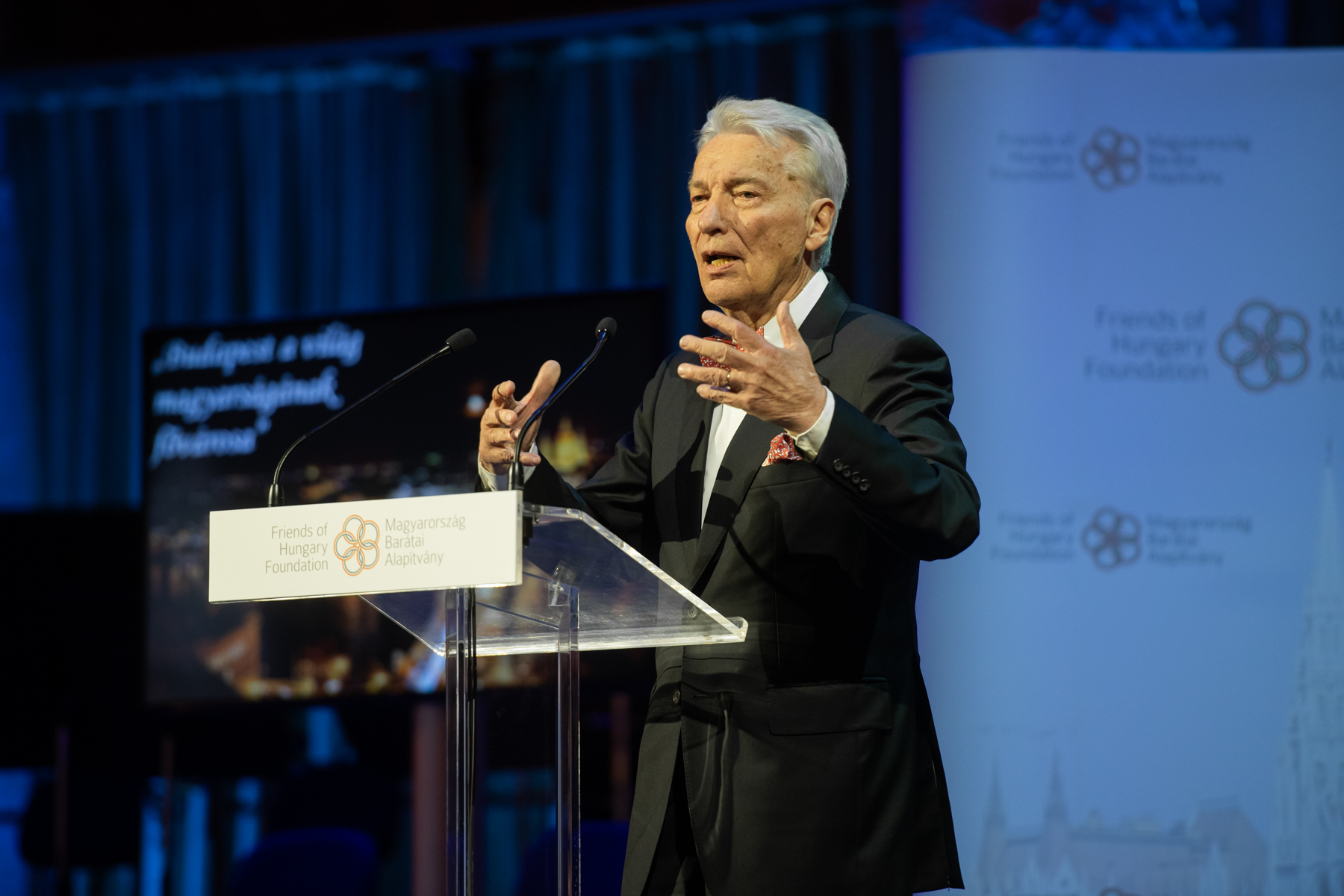 It’s not enough to be talented, you also have to be Hungarian—said President János Áder, using the world-famous photographer Robert Capa’s phrase, in welcoming the Community of the Friends of Hungary Foundation; the thought behind this, the active patriotism, was felt by more than two-hundred families who had returned home for the conference. Members later listened to Prime Minister Viktor Orbán’s speech on the aims of the government while E. Sylvester Vizi emphasized: it’s important to create a legitimate image about Hungary and its successes worldwide.

The VI. Friends of Hungary Conference started off with visiting embassies. Embassies hosted members living in the United States, Great Britain, Austria and Germany. The American ambassador, David B. Cornstein, spoke of his nomination and how he got to Hungary, the upcoming Trump-Orbán meeting (that he played a key role in arranging), and about the case of CEU.

The British ambassador, Iain Lindsay, with outstanding Hungarian, spoke mainly about Brexit, but he also mentioned increasing British investments, British concerns about growing Russian influence, and (as a spontaneous part of the program) members were able to meet the ambassador’s Hungarian-adopted mongrel, Juno, as she suddenly and randomly appeared in the hall. 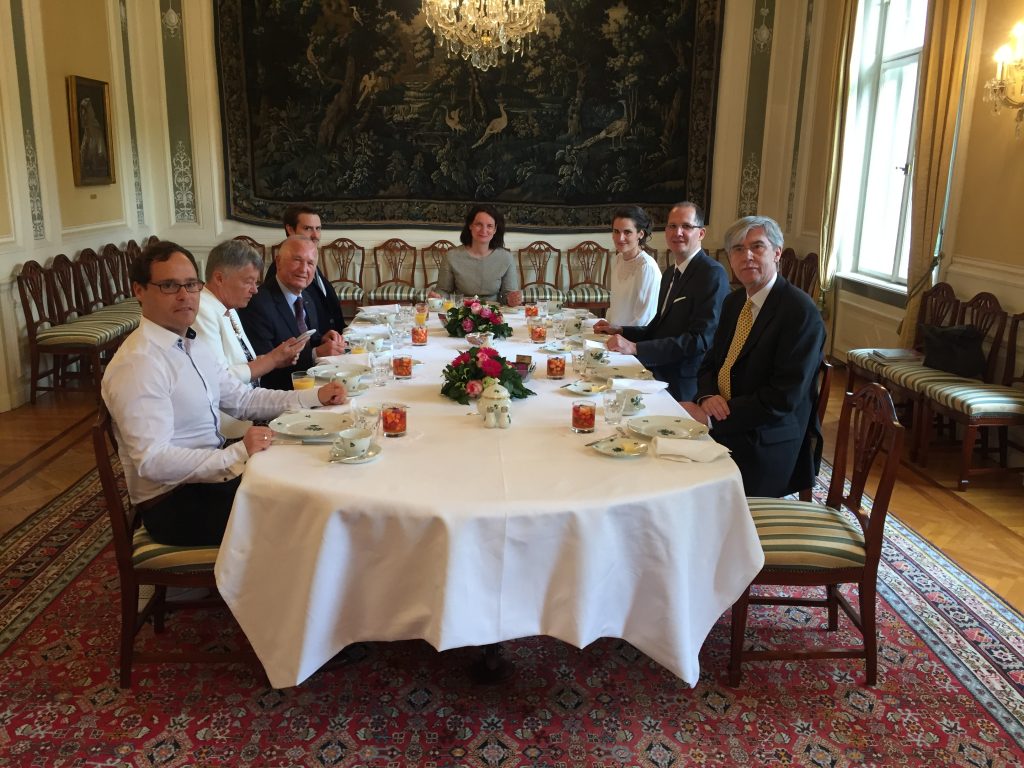 Members of the Friends of Hungary Community at the Austrian ambassador’s residence with Elisabeth Ellison-Kramer (in the center). Photo by Ungarn Heute

There was another meeting at the Austrian residence with a nice atmosphere; Elisabeth Ellison-Kramer, ambassador, awaited the members of the Friends of Hungary Foundation with breakfast. She emphasized the good economic, cultural, scientific, and innovational connections—though there was mention of some of the clashes of perspectives between the two (for instance in regards to nuclear energy). The Austrian ambassador asked for recommendations from her Hungarian guests on how to improve relations between the countries.

Talks at the German embassy also touched on the good economic, scientific, and cultural relations between the country; yet Florian Ries, the deputy of the embassy’s political department, did not try to hide the fact that there are many conflicting political standpoints between the countries, especially concerning democracy and freedom of the press and education. The Hungarian guests raised the question of freedom of the press in the German system because they believe the German media quite one-sidedly disperses negative information about Hungary, as well as promotes untrue accusations of antisemitism. 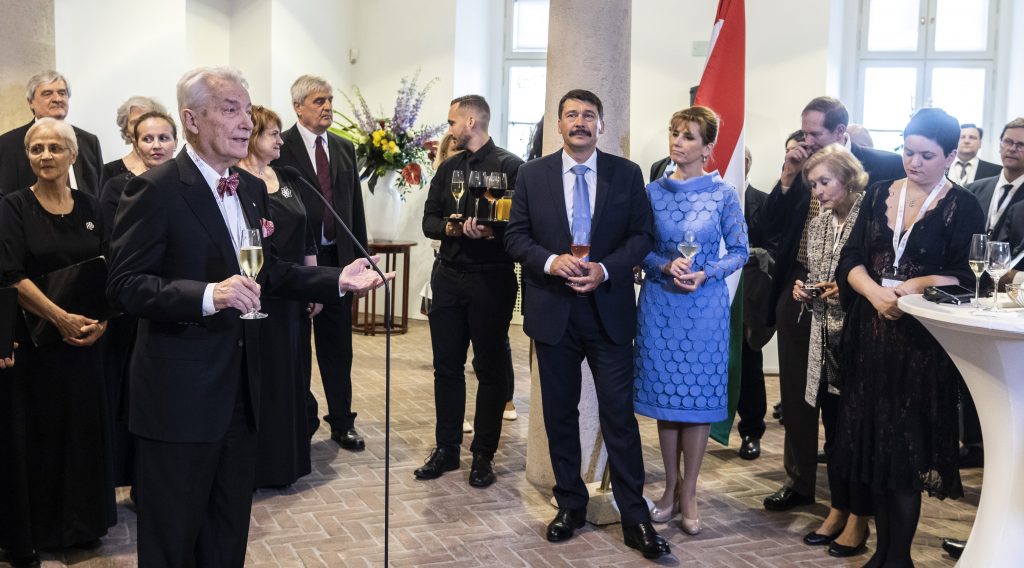 Chair E. Sylvester Vizi with President János Áder and his wife, Anita Herczegh at the residence of the President. Photo by Zsolt Szigetváry/MTI

After visiting the embassies, President János Áder hosted conference participants in the early afternoon at the Sándor Palace where he half-jokingly commented that it was difficult to find a location for the Friends of Hungary event because there had never been this many participants. The President praised the work of the Friends of Hungary through the example of Mihály Répásy, a general in the 1848-49 freedom fights, recalling that Görgei left the organization behind the frontlines to the outstanding soldier because Görgei believed: “a skilled organizer is more useful to our country than two good captains.” According to János Áder, the Foundation’s members are doing this type of important work in their own communities. In regards to what and how they are contributing to Hungary as representatives of the country, he said

adding that the confidence ensured through them is invaluable. The President closed his speech with the words of the Hungarian-originated, world-famous, photographer, Robert Capa who said: “It’s not enough to be talented, you have to be Hungarian” thanking those present that they feel and act to “represent Hungary’s values and give worth to our words and strengthen our honor in the world.” 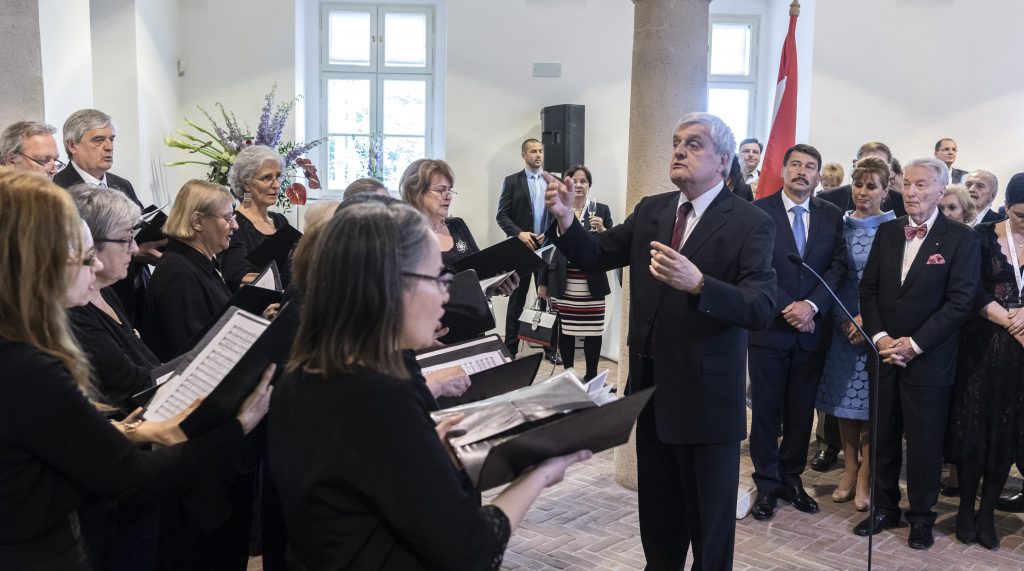 E. Sylvester Vizi, Chair of the Foundation’s Board of Trustees, thanked the President and his wife that, for the sixth time, they invited Friends of Hungary to the residence, for their love for the Foundation, and that they know what the Foundation does and how it serves the Hungarian reputation internationally. He highlighted that, for example, with the Venezuelan Hungarians and the scouts from Los Angeles, a new generation is present as well.

Repeating János Áder’s Capa quote, Vizi emphasized: the message that aside from talent, the preservation and living the experience of being Hungarian is important and everybody should take this home. After the talks, the members of the Foundation spoke with the President for over an hour in casual conversation. 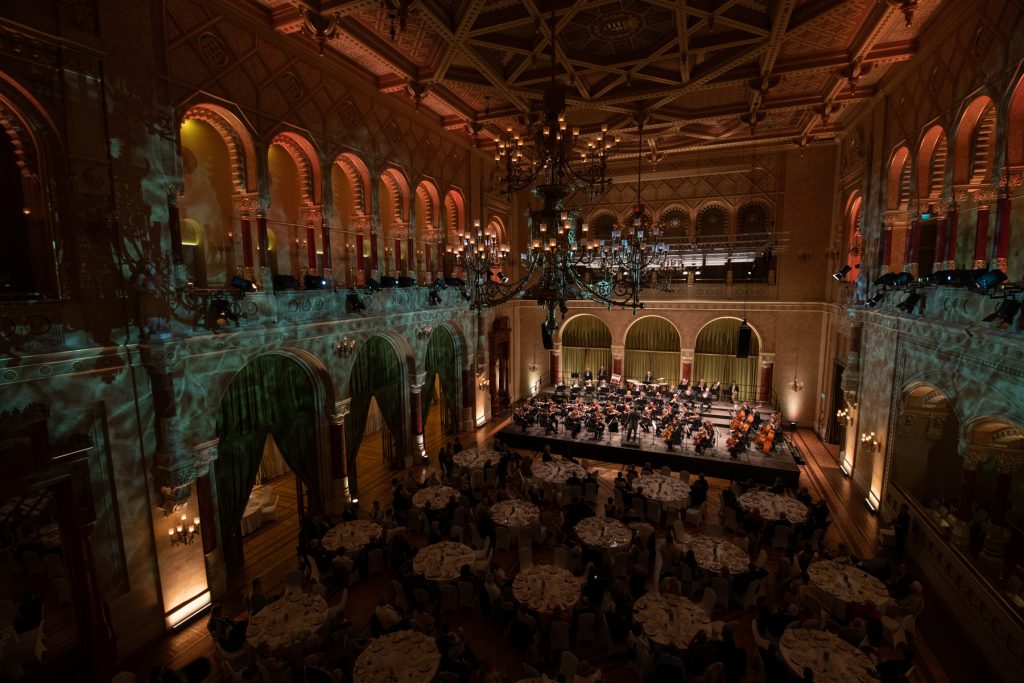 Members of the Friends of Hungary Community at the Vigadó. Photo by Tamás Lénárd.

After the President’s visit, the members of the Friends of Hungary Board of Trustees and the founders hosted Prime Minister Viktor Orbán in the Vigadó, who then gave a speech for the community. E. Sylvester Vizi spoke prior, thanking the head of government that he, for the fifth time, accepted the invitation and quoted one of Orbán’s sentences about the importance of active patriotism. 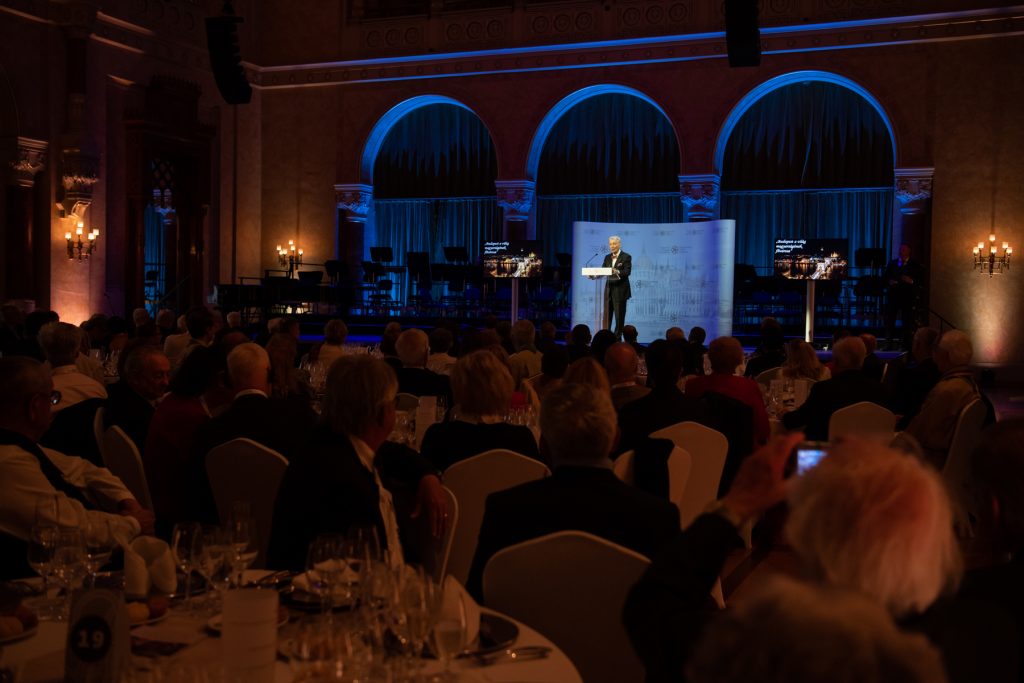 According to the Chair of the Board of Trustees, this active patriotism is proven by the more than 200 Friends of Hungary families who, out of their own pocket, paid to travel to Hungary and celebrate their roots and the successes of the country. E. Sylvester Vizi praised the work of the Foundation’s two online news portals, Hungary Today and Ungarn Heute: it’s very important that there are foreign language sources that provide a truthful image of the country. He hopes that the development of the country and Budapest continues and there will be even more Hungarian successes that people can speak of world-wide.

The government’s goal is that by 2030, Hungary should have the region’s most powerful military, the strongest economic and demographic indicators, the strongest capital, and the most stable political system

After his speech, the PM answered questions from Friends of Hungary members.

The event continued with the National Philharmonic Orchestra’s concert then Hungarian singer-songwriter Ákos closed the night with a special a cappella concert. 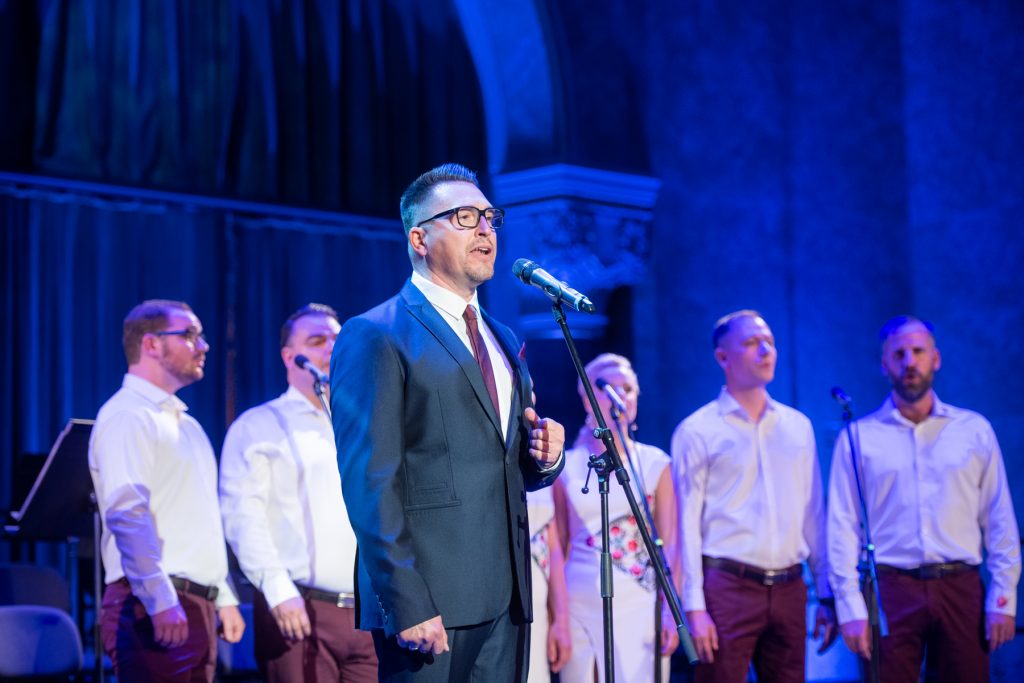 In the featured photo: E. Sylvester Vizi at the VI Friends Of Hungary Conference. Photo by Tamás Lénárd