Due to the coronavirus epidemic, only the smaller events of the Budapest Pride Festival will be held this year, while the parade on Budapest’s streets will be canceled. Organizers of the event think it would be irresponsible to gather twenty thousand people in one place, therefore the parade will not be held.

The parade of the Budapest Pride event series will not be held this year, the organizers of the event said on Tuesday. As they wrote:

It is of utmost importance to us that our events are truly safe. That’s why we had to make the decision not to gather twenty thousand people in one place and we are replacing the parade with alternative events.

However, the Budapest Pride Festival will be held between August 14-23rd as planned, with the other 37 events kept unchanged. In addition, organizers are currently trying to plan an alternative event instead of the great parade, but details are still being worked on.

Extra epidemiological measures will be introduced at the programs to protect participants, in line with current regulations and recommendations. Programs will include a joint bike tour, an LGBTQ+ Christian workshop, board games, theater performances, and film screenings.

The 2020 Budapest Pride can be held in August, instead of the original July date which was postponed due to the coronavirus epidemic. In addition, according to some press reports, the police also ruled that this year’s Pride logo featuring the Holy Crown does not violate the crown as a national symbol, because the organizers […]Continue reading

Even though Pride can go ahead without restrictions in August, there are already some disputes surrounding the event. As we reported earlier this week, the Szent Korona (Holy Crown) Radio station filed charges against the organizers of ‘Budapest Pride,’ because they chose the Holy Crown as their coat of arms for this year’s Pride events, depicted with a rainbow for the LGBTQ community. 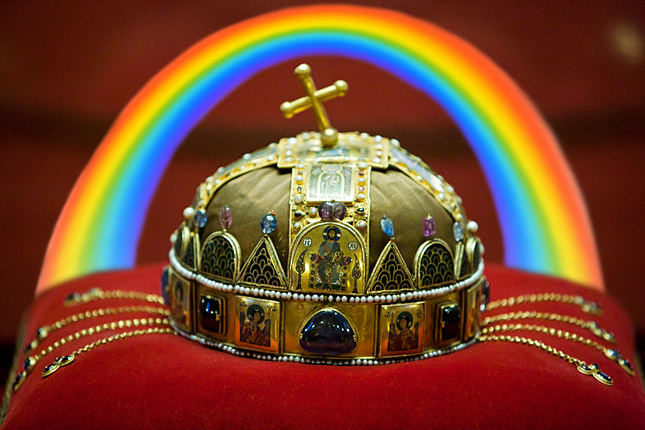 The Szent Korona (Holy Crown) Radio station filed charges against the organizers of ‘Budapest Pride,’ because they chose the Holy Crown as their coat of arms for this year’s Pride events. On the posters, the Holy Crown is depicted with a rainbow for the LGBTQ community. According to Szent Korona Radio’s announcement: “to depict the […]Continue reading

However, according to an article by pro-government site PestiSrácok, the police ruled that the logo for this year’s Budapest Pride does not violate the Holy Crown as a national symbol because the creators did not change anything on the crown itself, and the fact that the rainbow background offends the individual value system of many is not a reason to establish suspicion of a crime.