In an open letter published on his Facebook page, Karácsony said that rather than multiplying the resources needed to protect lives and livelihoods by strengthening partnerships, “Orbán is about to reject EU support for the Hungarian people”. He also said the prime minister was pushing local authorities to the brink of insolvency by increasing their burdens.

Although the Budapest municipality’s revenues have fallen by over 20 percent due to the coronavirus epidemic, the government has increased its taxes three-and-a-half-fold, and the taxes on its main water supplier four-fold, Karácsony said.

He called on Orbán to accept the partnership of local governments in the interest of handling the crisis effectively.

“Do not fight with Hungarian localities and the EU, which is offering help to the country, but rather make sure that funding reaches those entitled to it, the Hungarian people,” 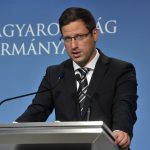 PMO Head: Hungary to Have 5 Million Vaccinated by End of May