The name of the restaurant, which opened in the neo-Bauhaus building of the Collegium Hungaricum, Hungary’s cultural “embassy” operated by the Balassi Institute, the Hungarian government’s worldwide non-profit cultural organisation, brings to mind the movie Berlin Calling, the cult film depicting the German capital’s electronic music scene. Its name therefore reflects that Budapest Calling not only intends to introduce Hungarian wine and gastronomy to the foreign public but also the country’s musical culture.

A major function of the new “Hungarian place to hang out” is to spread the good reputation of quality Hungarian wine. Budapest Calling introduces eleven wine regions, represented by smaller, so-called “artisan” wineries which have no other means of gaining a presence on the German market, Miklós Forrai, head of Hungary Calling, has revealed.

The opening of the new wine bistro is important because until now, obtaining quality Hungarian wine in Berlin has been a difficult task, which not only caused sorrow to the large Hungarian community living there but also demonstrates that Hungarian wine is still no serious competitor to Spanish or Italian wines. This is especially the case if we consider that mid-range wines from these two countries are still flooding the shelves of supermarkets and cut-price stores.

Of course, guests in the newly opened wine bistro are not forced to buy a whole bottle at once; one can try several wines during a dinner, which is a great opportunity to introduce lesser known varieties to the public.

Wine dinners will also regularly be organised at Budapest Calling; at the first such event, held last week, the Laposa winery of Badacsony and the Hummel winery of Villány were given the opportunity to introduce themselves, both to great acclaim.

The wine bistro follows the trend in gastronomy which can be summarised as “new Hungarian cooking”, which represents a kind of traditional Hungarian cuisine “reinterpreted in the Mediterranean style”; on the menu, we can thus find, for example, duck breast with red cabbage strudel and pomegranate. 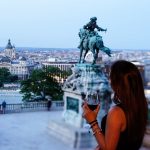