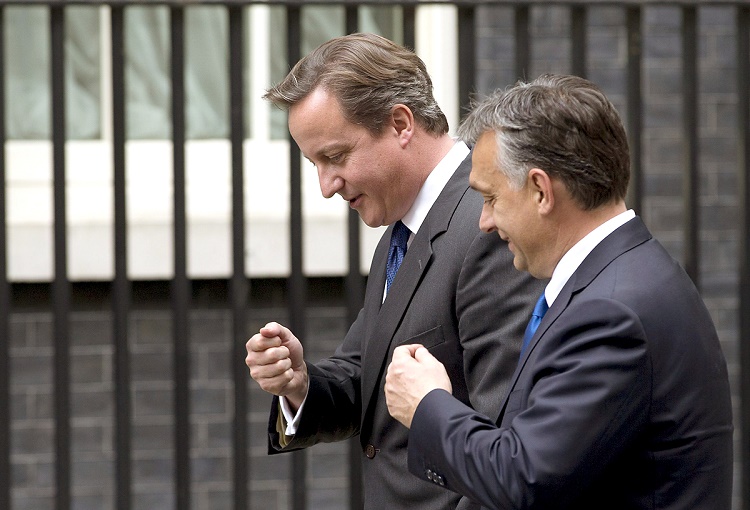 Prime ministers David Cameron of Britain and Viktor Orbán of Hungary are expected to reach consensus on several issues at their meeting today in Budapest, analysts interviewed by the daily Magyar Idők said. Both prime ministers reject the concept of a United States of Europe and rather favour a Europe composed of nation-states. They also agree that there is no need for transferring further competences to the European Union, political scientist Zoltán Kiszelly said. The demand that the EU members which are not part of the euro zone should be given a bigger say in influencing trends within the zone can be another matter of consensus.

Orbán and Cameron, however, will probably disagree on the issue of east European guest workers, he said. Other topics expected to be on the agenda include the post-2020 EU budget and the future of Britain’s EU membership. It is not likely, however, that the migrant crisis will take centre stage as Britain has been exempted from observing the EU’s refugee rules, Kiszelly said. Tamás Lánczi, another political scientist, also expects consensus arguing that Hungary has an interest in an alliance with the United Kingdom. The British bid to halt the inflow of east European guest workers by denying in-work benefits can also be raised.

Meanwhile radical nationalist Jobbik party called on Viktor Orbán to strike an alliance with David Cameron in order to “recover Hungary’s national sovereignty”. Ever since its foundation, Jobbik has repeatedly proposed amending the EU’s basic treaties and Hungary’s accession treaty but ruling Fidesz rejected this, Jobbik MP Márton Gyöngyösi said. “This idea is no heresy”, he said, adding that Britain is already making use of the opportunities offered by the Lisbon Treaty for reform. Hungary should take the opportunity to become an ally to a great power in recovering its sovereignty, he said. The cabinet should draw up a list of required amendments in order to assert national interests, such as increasing the role of national parliaments, the issue of migration and the protection of native minorities and farmland. Jobbik will initiate a day of political debate in parliament about the need to amend the EU’s basic treaties, Gyöngyösi said.

Yesterday the Hungarian Prime Minister met Jarosław Kaczyński, leader of Poland’s ruling Law and Justice Party (PiS) as part of a private visit to the country, Polish commercial news channel TVN24 reported. The two party leaders met in the southern resort town of Niedzica, near the border with Slovakia. Neither Poland’s government spokesman nor the parliamentary group leader of PiS was available to comment on the meeting. According to unofficial Hungarian sources, the two politicians discussed their views on the UK’s renegotiations of the terms of its European Union membership ahead of David Cameron’s official visit to Hungary. Citing the same sources, TVP said the other topic discussed at the meeting was Europe’s migration crisis.