Hungarian President János Áder has called the government-initiated referendum on the mandatory resettlement of non-Hungarian citizens to Hungary for 2 October, a statement published on the website of the Office of the President of the Republic reveals.

Upon the government’s proposal, the National Assembly voted on holding a popular referendum on the European Union’s planned mandatory migrant quota system with support from MPs representing the governing conservative Fidesz-KDNP alliance and the opposition radical nationalist Jobbik party. A total of 136 MPs voted in favour of the initiative, while five independents opposed the notion. In line with a previous decision by the Curia, Hungary’s Supreme Court, the final question put to the electorate will be the following:

Do you want the European Union to require the compulsory resettlement of non-Hungarian citizens to Hungary without authorization by the Hungarian Parliament?

The referendum was given the go-ahead by the Constitutional Court in late June after the body rejected four appeals against plans to hold the vote. The anti-quota referendum was contested by left-wing politicians, including Socialist (MSZP) MEP Tibor Szanyi and Gábor Fodor, head of the minor Liberal Party. However, “the obstacles have now been removed”, Bence Tuzson, state secretary for government communications, told a press conference. The government asks Hungarians to say no to EU quotas, Mr. Tuzson said at the time. 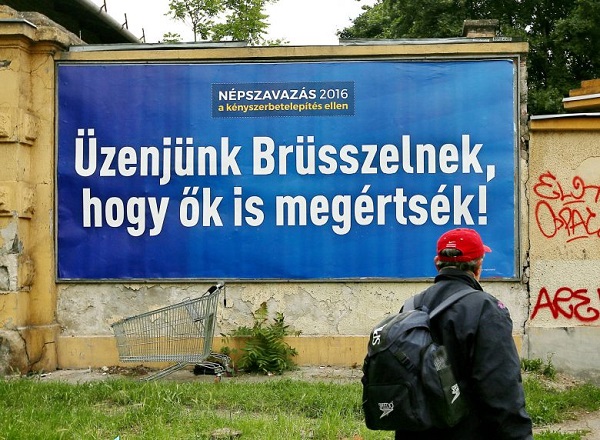 “Let’s send Brussels a message so they too understand” – Government billboards across the country have been urging the electorate to vote against the quota system (photo: magyaridok.hu)

The official campaign for the referendum is set to begin on 13 August, fifty days’ prior to the vote being held, under provisions laid out in the law on electoral procedure.

Left-wing opposition parties MSZP, DK and Együtt have called upon their supporters to stay away from the referendum they say only serves government propaganda and is a move towards Hungary leaving the European Union, claims the cabinet strongly denies.

A poll conducted in late May showed that the vast majority – 77 per cent – of Hungarians reject migrants’ mandatory resettlement under the planned quota system.