Breaded Chicken – The Crispy Meat That Everyone Considers Their Own – With Recipe! 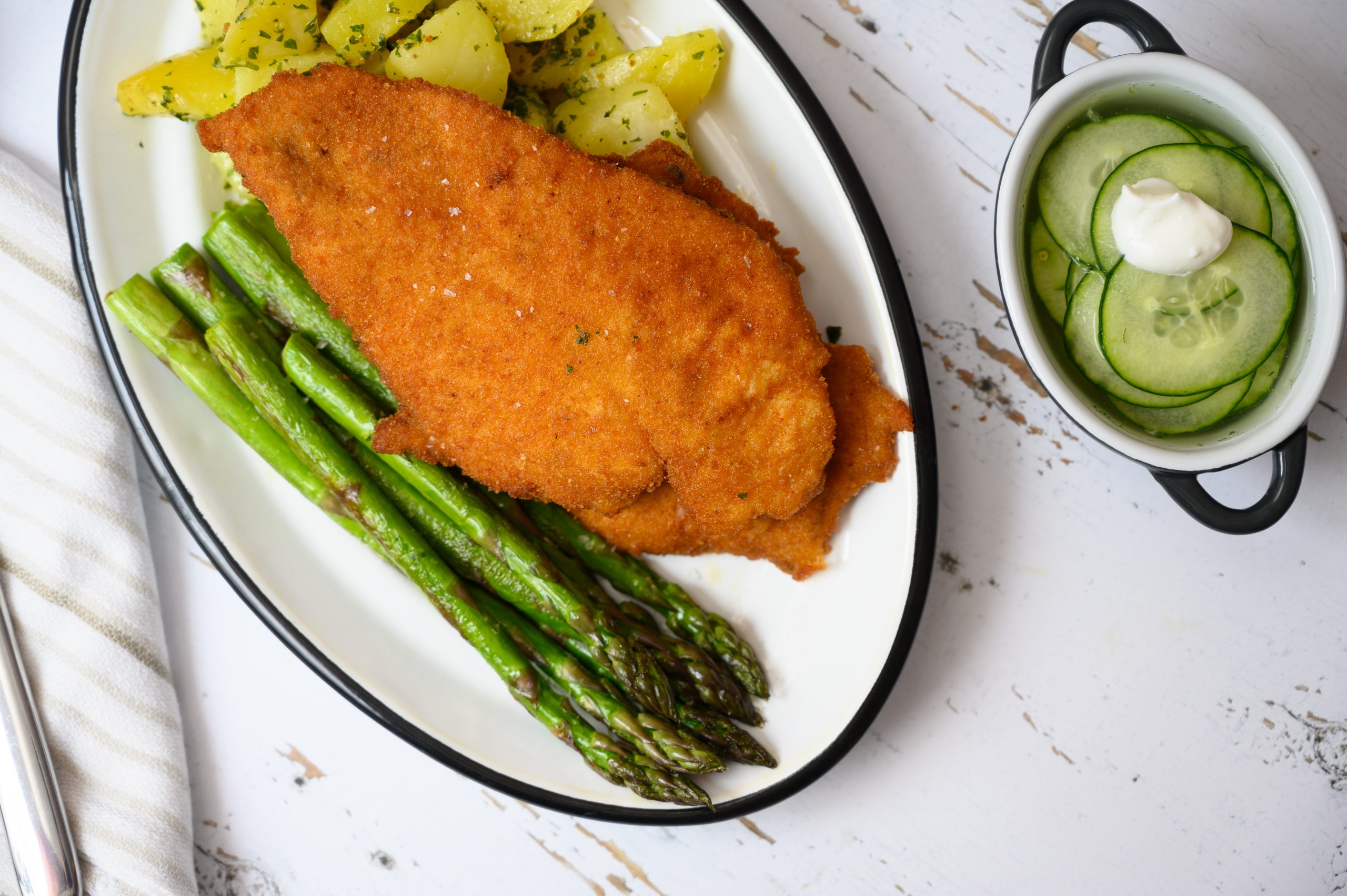 It is practically a given that if we ask 10 Hungarians what their favorite food is, at least 7 will say breaded chicken, and 2 will only say something else because they know everyone’s response is going to be breaded chicken. We know for a fact that breaded meat is not a Hungarian invention, but there is no other country in the world where so many dishes involve breading. From ice cream to the Oreo cookie, we have essentially breaded everything by this point, which is no surprise considering that one of the greatest kitchen practices ever fell on us all at once.

According to one theory, the origin of breading can be traced back to the Moors, who popularized it in Andalusia, from where the Italian nobility learned about and began using it. In 1476, a Florentine banker by the name of Benedetto Salutati served almond cake breaded with gold powder at a feast given in honor of the King of Naples.

This is how the practice of breading ended up in Milano, and from there to Vienna, where through it came the legendary Wiener Schnitzel. Interestingly enough, with all the buzz about the Habsburg Monarchy, we still ended up leaving this dish to the Austrians, because for us breaded chicken, or Backhendl, became the popular dish. We “Hungarianized” its garnishes a little bit, using parsley potatoes instead of potato salad, accompanied by cucumber salad with sour cream. In turn, it would be a sin not to add asparagus as well when it is in season. 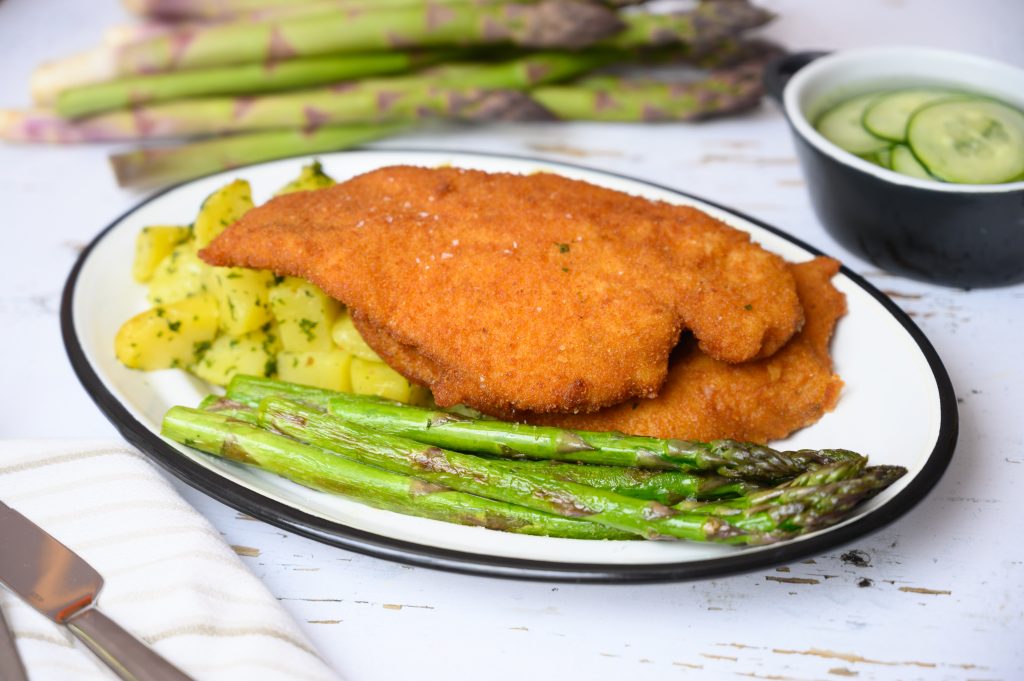 For the parsley potatoes:

For the cucumber salad:

Wash, peel, and cut the potatoes into cubes, then cook them in salty water. This can be done with new baby potatoes as well. In this case, it is enough to cook them and then pull off their peels.

Turn the potatoes in the heated up butter, fry them in a skillet for a little bit, then then add the chopped parsley. Cook for 2-3 minutes, shaking the skillet often, until the potatoes are cooked.

Thoroughly wash the asparagus, break off their stems, and fry them in oil until they begin to brown slightly. It is important for them to remain crispy, and they should only be salted at the very end.

Grate the cucumbers and sprinkle salt on them (add pepper or even paprika if you would like). Prepare the vinaigrette by mixing sugar, salt, and vinegar together according to taste, then adding water. Pour onto the vegetables, then place those in the fridge so that the flavors mix together. When serving, add sour cream as well. 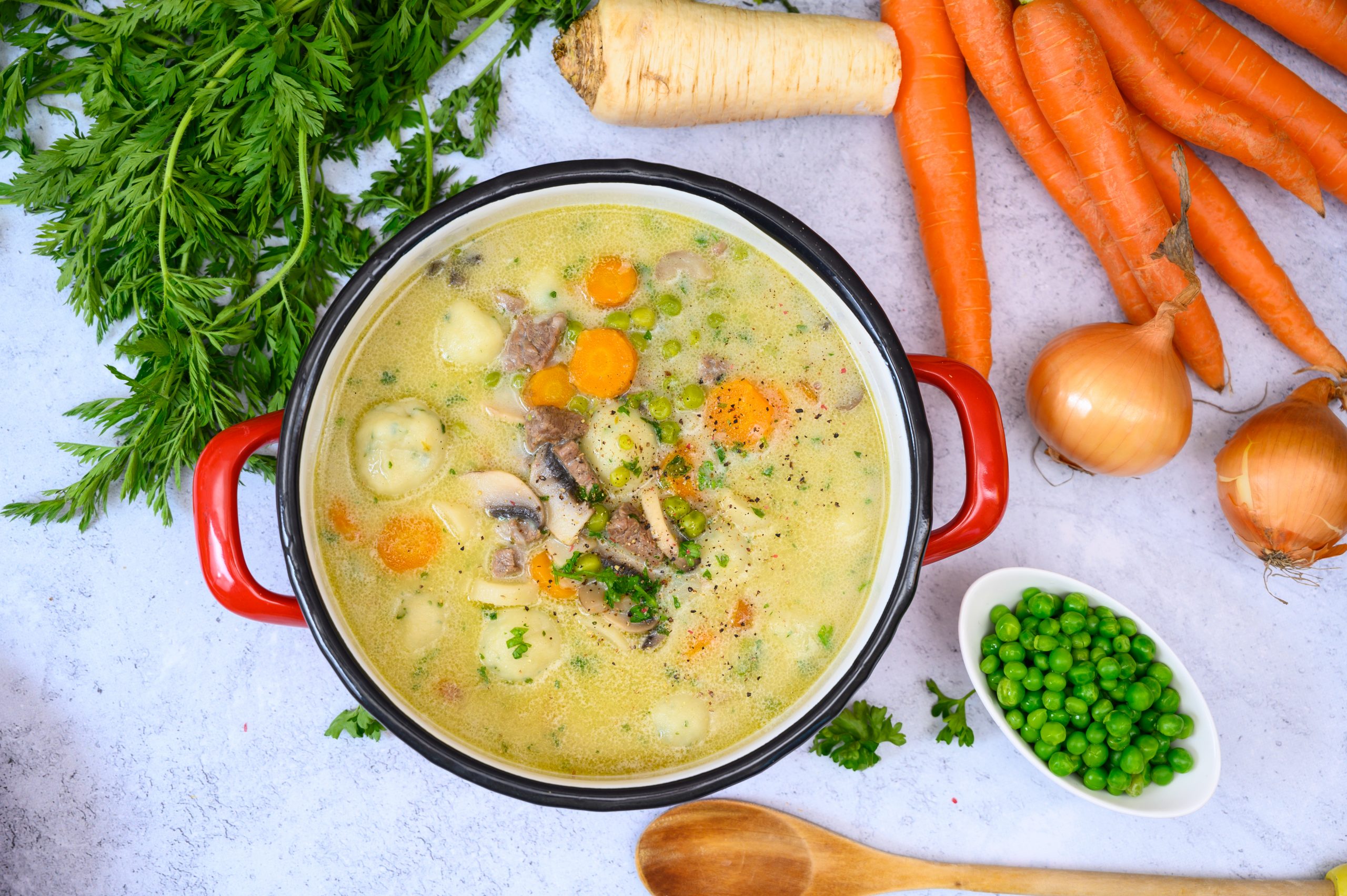 Hungarian food history is generally not very clear, but Nyírség dumpling soup (Nyírségi gombócleves) is a mystery even to food historians.Continue reading