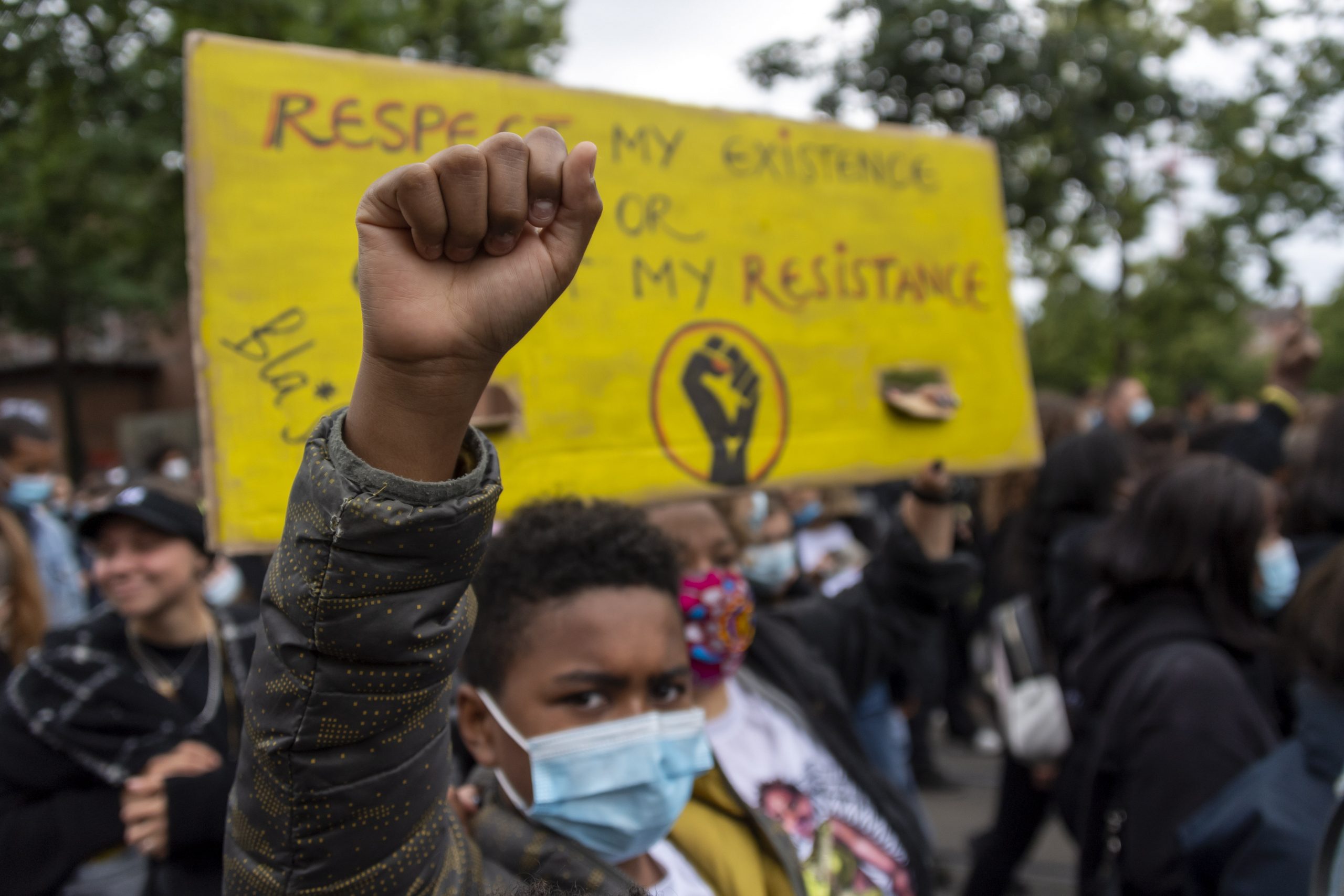 A newly-erected Black Lives Matter statue, created by Péter Szalay on Ferenc Square in Budapest’s IX district, was revealed on April 1st. Since then the statue had been disturbed several times: the white supremacist Légió Hungária movement and the far-right Mi Hazánk Party placed OSB boards with crosses on top of them on all four sides of the statue, while by that same evening, a man had poured white paint on the statue. Eventually the statue was demolished by the far-right Légió Hungária movement, however, Péter Szalay said he was not surprised that the destiny of the statue would turn out this way.

Black Lives Matter (BLM) is a decentralized political and social movement protesting against incidents of police brutality and all racially-motivated violence against black people, originating from the United States where the topics of structural racism and police brutality have been elevated for a very long time. BLM emerged after the murder of George Floyd in May 2020, an African American man killed during an arrest after a store clerk alleged he had passed a counterfeit $20 bill in Minneapolis. Since then the social and political movement has spread across the world, however, frequently receiving criticism from right-wing and far-right commentators and politicians.

Prior to the erection of the statue in Budapest dedicated to symbolize the BLM movement, the Ferencváros Municipality announced a competition last August to have independent public works on the streets of the city again. A professional jury selected six works from the submitted entries, which would be exhibited in four locations: Ferenc Square, Markusovszky Square, Madaras József Square, and in the area next to the large playground in the József Attila housing estate.

One of the creations that the jury selected was Péter Szalay’s sculpture about Black Lives Matter, which has created controversy in the capital. Pro-government publicist and Fidesz-founder Zsolt Bayer reated with their intention to knock the statue down the next day, while according to the far-right Mi Hazánk (Our Homeland) party, the statue was an “anti-European, anti-white, anti-heterosexual, and anti-Christian symbol.” 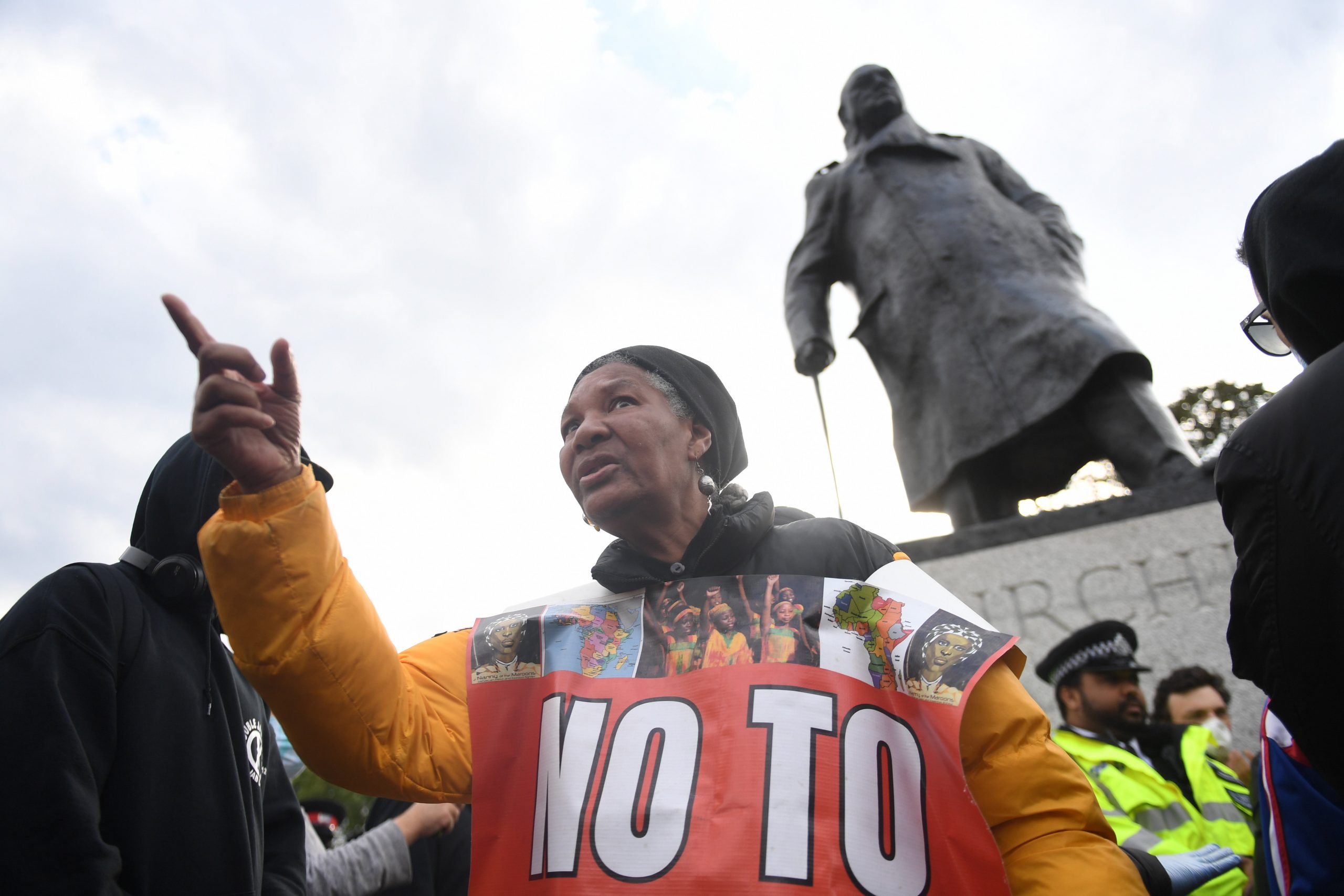 Mi Hazánk activists led by Mi Hazánk president László Toroczkai, along with members from the Hungarist and white supremacist Légió Hungária movement, showed up shortly after the statue was put on display at Ferenc Square and covered it up on all four sides using OSB boards with crosses on top of them. Party stickers were placed on the faces of all four boards.

As a result of the vandalism, a police ribbon was drawn around the statue, even armed soldiers appeared in the square, and police officers were on the scene throughout the night. At half past eight on Friday morning however, three activists from the Légió Hungária still managed to demolish the small statue. Ironically, while in the United States BLM-supporters demolished and removed statues, in Hungary, far-right groups demolished a sculpture related to the BLM movement. 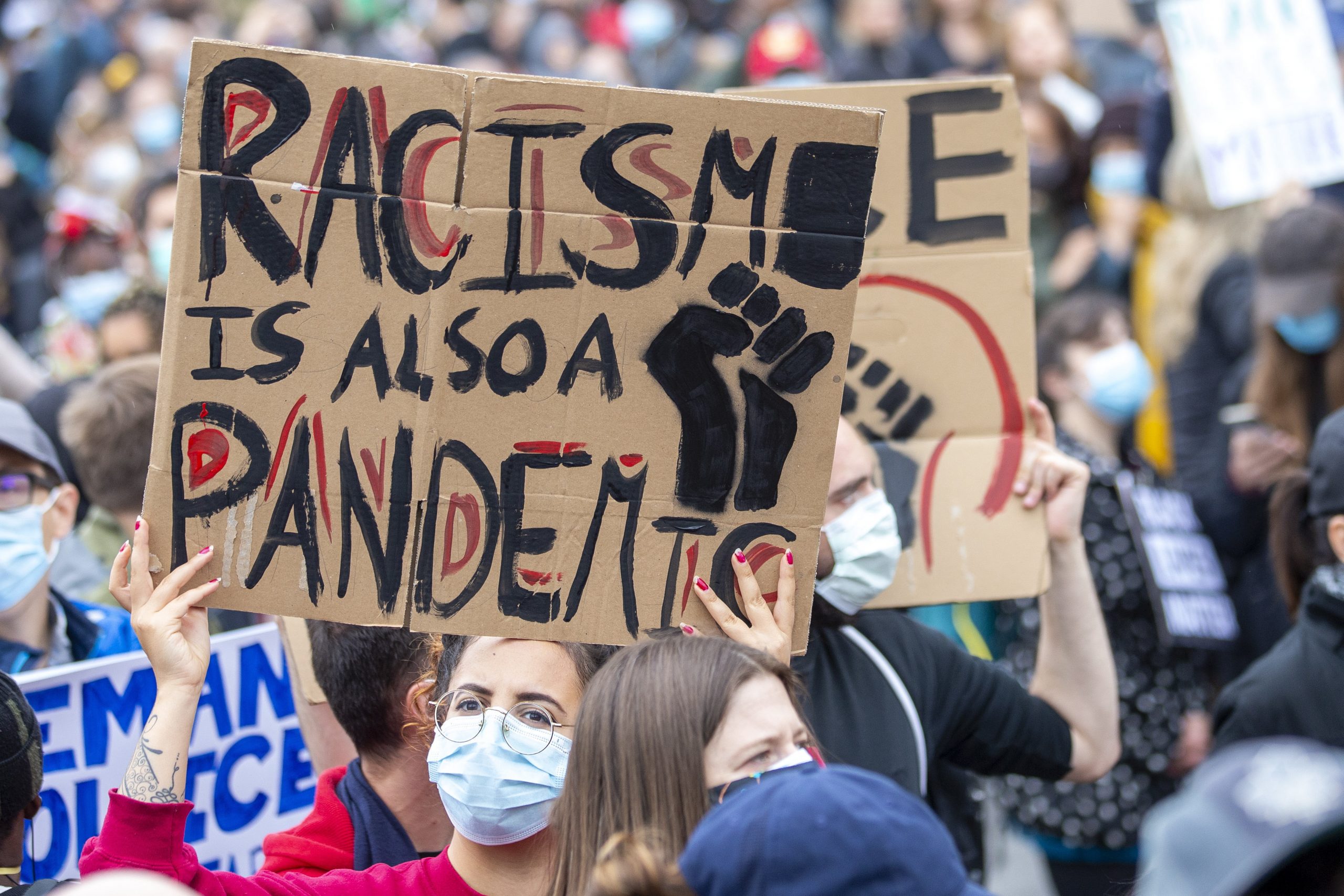 Far-right activists have boarded up a newly inaugurated rainbow-colored Black Lives Matter statue of liberty on Ferenc Square in Budapest’s IX district. The municipality of Ferencváros announced a sculpting competition last August, the winners of which would have their creations placed around the district’s streets. Six winners were picked, among them Péter Szalay’s rainbow colored […]Continue reading

The mayor of Ferencváros, Krisztina Baranyi, did not think that the rainbow BLM statue at Ferenc tér would be demolished, but she did not regret setting up the installation.

“I was disappointed, but of course we would set up the statue again,”

Baranyi said on Friday, after the far-right movement knocked it down.

The mayor of Ferencváros stressed that as a district leader he does not want to form a private opinion about the statue. She thinks her role ended when a free competition was announced in which professionals selected the works they thought were most exciting. Therefore, she did not even reveal whether she personally liked the work.

“Neither then nor now do I intend to make decisions on matters of art, I seriously believe that politics cannot play a role in critiquing art.”

Péter Szalay, the creator of the sculpture, previously spoke to the press about the fact that he thinks the fate of the sculpture is an integral part of the work of art, so he has absolutely counted on the scenario that the sculpture would be targeted. In fact, he would even be happy if it was knocked down.

According to him, the destiny of the sculpture was preordained; however, he added that it was more interesting than expected. Szalay said that he had arrived very stressed for the handover because the Mi Hazánk Movement had threatened to prevent the statue from being set up. However, in the end, he managed to set it up undisturbed, and later Szalay followed the destiny of his creation with interest.

To the question of whether the statue would be restored in the future, Szalay said he has no intention to re-erect the creation.

“It was invented this way: for as long as you can, you can see it. I’m not going to erect a new one. It was enough to see it once, the second time it would not be so interesting,”

In terms of the ideological message of the statue, Szalay believes that it is a misconception that the statue would clearly celebrate the BLM, or the gay rights movement. In his view, the work does not make any political statement, neither pro nor counter; that is, contrary to popular belief, it is not Black Lives Matter propaganda.

According to Szalay, his concept is not a dissemination of his own political opinion, he just wanted to play with the politicized symbols to provoke wider social debate and deeper reflection.

“…Let’s take the modified female figure, the symbol of freedom, who kneels in my work. Is freedom forced on its knees? Before whom? Before the BLM? Before male oppression? Before gay equality? Before the virtual weapon of software manipulation?,”

Szalay indicated the various interpretation possibilities. According to Szalay, as an artist, he has no direct political message, he is completely disillusioned with politics anyway.

Related article
Churchill Statue in Budapest Damaged with Words 'Nazi', 'Racist' and 'BLM' Spraypainted on It 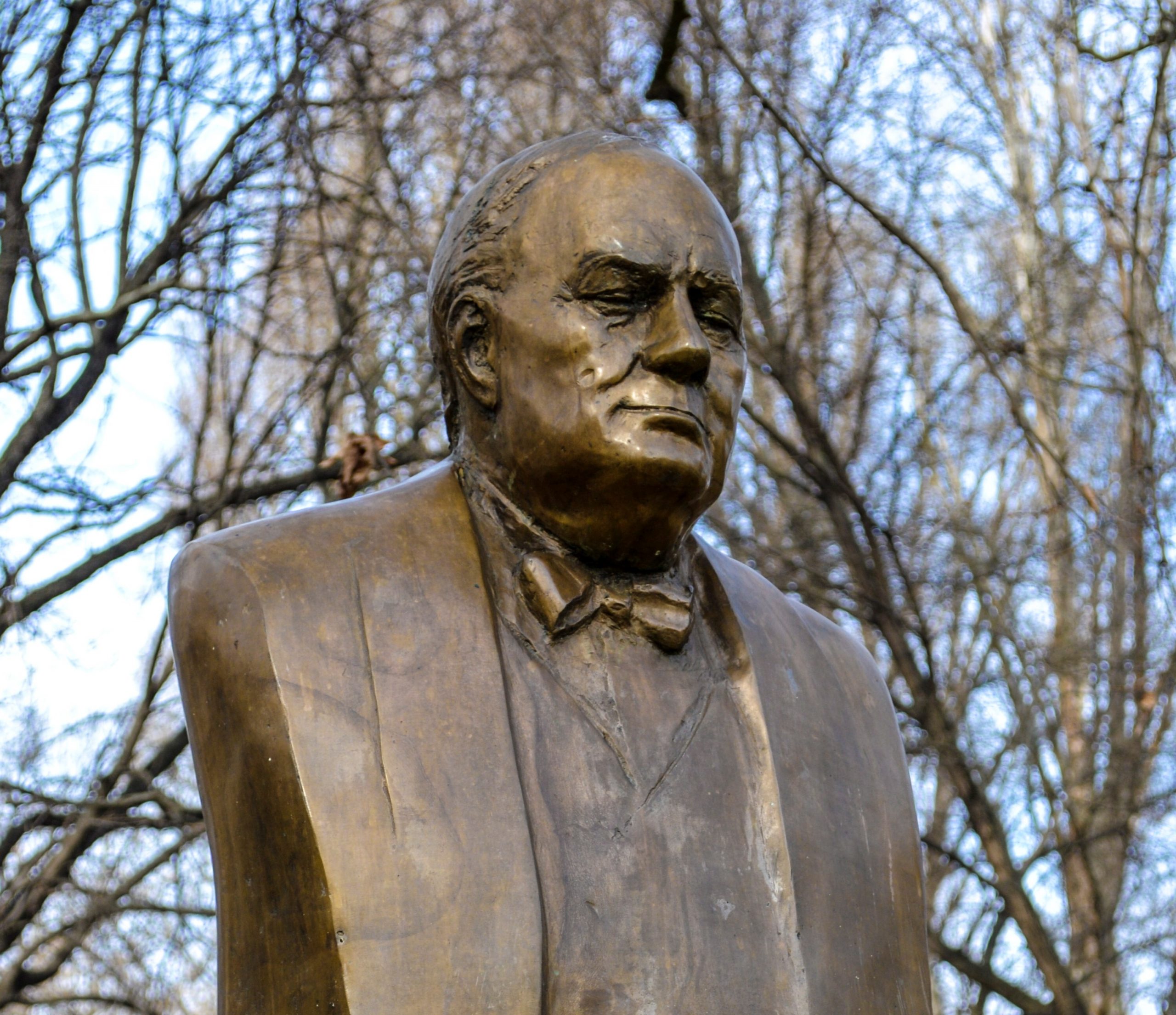 Winston Churchill’s bronze statue, which has stood in City Park since 2003, has been the target of vandalism since it was erected on the Churchill promenade. Just like the accompanying boardwalk sign and description plaque, the statue was spraypainted, covered in red paint, and scribbled on several times. This week, following worldwide demonstration against police […]Continue reading

Now that the statue has been knocked down, the American and British statue demolitions related to the BLM movement and the Hungarian monument wars related to the debates around the regime change and the Turul statues, are somehow viewed from an inverted point of view.

“Hungary also has a long tradition of sculpture demolitions. Public monuments are a means of political representation in our country, each team just wants to endure their own. It’s a play, and now I’ve set up a sculpture like this, which has a very instructive fate. However, fundamentally I think it’s important for contemporary works of art to have a medium, even in the public space,”

The work was supposed to be in Ferenc Square for only two weeks, however, it did not even make it for 24 hours. 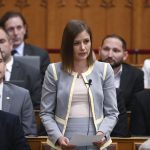