In Bizarre Incident, Russian Citizen Threatens Hungarian Activist, Forces Him to Apologize for Throwing Paint at Soviet Monument in Budapest 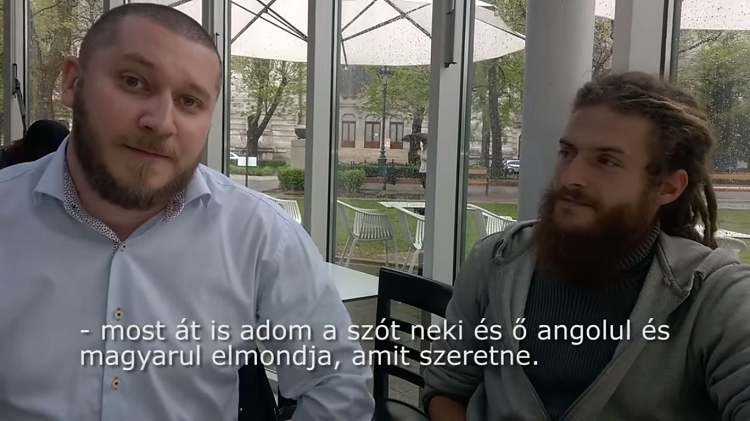 Last week, an act of political vandalism led to a bizarre incident in which a large Russian man forced a Hungarian citizen to apologize for his “insulting” actions toward the Russian people in a YouTube video.

The Hungarian in question, Gergő Komáromy, is a musician and activist, who gained notoriety last year as the so-called “Jesus” of the demonstrators protesting the cutting down of trees in Budapest’s City Park.

Last Monday, Komáromy and a fellow activist decided that, in a twist on the Hungarian tradition of ‘Easter sprinkling,’ they would go to the Soviet monument located on Budapest’s Szabadság (Liberty) Square, and throw balloons filled with yellow paint at the obelisk as a way of protesting the Orbán government’s perceived cozying-up to the Russian government.
You can view a video of Komáromy and his partner ‘sprinkling’ the Russian obelisk below:

This act, which led to the arrest and fining (to the tune of 30,000 forint- 96 euro) of Komáromy and his fellow activist, also caught the attention of Magomed Dasajev, a Russian citizen of Chechen ethnicity who lives in Budapest. Magomed, incensed at the perceived insult to Russia, went out of his way to find out who as “responsible” for this act; eventually his search led him to Gergely Komáromy. And while the circumstances that led directly to the video that Magomed would produce with Komáromy in a coffeehouse on Budapest’s Liberty Square, the Chechen did find his man, and even succeeded in extracting an apology from the musician/activist.

At the beginning of the clip, Magomed introduces himself, as well as the paint-throwing incident, before explaining to the camera how he and his friends “found the citizen” responsible for “vandalzing” the Soviet monument, which he referred to as “the memorial to the heroes of the Great Patriotic War” (This is the common term in Russia for the Second World War). The camera then pans to Komáromy, who apologizes, in both English and Hungarian, “everyone who I hurt with this action”. Our Hungarian-speaking readers can view the video in its entirety below (you can also skip to 1:16 to hear Gergely’s English apology):

According to Hungarian newspaper Magyar Nemzet, Magomed Dasajev is a Russian citizen of Chechen ethnicity, who runs an alcohol import business in Budapest. He has lived in Hungary, with the exception of a few short stints elsewhere, for 13 years. Speaking with Magyar Nemzet, Magomed claimed to be a businessman who is not particularly interested in politics, who “lives for his family.” That being said, his business activities, which include a stint selling cars, seem to be slightly murky, as his company is not, in fact, in his name. In addition, Magomed’s lawyer, Tamás Kőhegyi, who also legally owns half his company (the other half is in Magomed’s wife’s name), has close ties to figures in the Hungarian government. In addition, in an interview in Hungarian radio last year, Magomed proudly said that “we have a friend in the Parliament,” a comment which raises yet more questions about the Russian citizen.

Since the video began to circulate online, the incident has generated condemnation from various corners of the political spectrum; in particular, it has led to criticism of the Fidesz-KDNP ruling coalition for its lack of decisive reaction to the incident. It has also brought Magomed himself into the spotlight of the Hungarian media; he was invited onto Hír TV for a discussion with Hungarian historian Krisztián Ungváry, where he claimed that part of the reason for his angry reaction was that his grandfather had fought in the Second World War.

Ungváry attempted to explain to Magomed that, for Hungarians, the Soviet obelisk is not simply a war memorial, but a symbol of over 40 years of oppression and occupation as well, of a regime that transported thousands of Hungarians to Gulags. Magomed then responded by claiming that the Second World War started with a Nazi attack on the Soviet Union; when the Hungarian historian explained to the Chechen that the war actually began with a joint German-Soviet invasion of Poland, Magomed claimed that, while he is no expert, he learned history differently (in Russia, the fact that Nazi Germany and the Soviet Union were officially allies—the infamous Nazi-Soviet Pact—is denied by officially history books; in fact, the Russian government passed a law two years ago declaring that officially the secret pact didn’t happen, which also criminalized writing about the agreement).

Magomed has repeatedly claimed that he never had any intention to harm Komáromy; in fact, he claims that the two are now on good terms, and are planning on “meeting up for a beer” sometime in the future.

This claim, however, is undermined by some of Magomed’s own comments in a closed, Russian-language Facebook group after Komáromy’s paint-throwing became known. In this comment group, the Chechen wrote that

People like this need to be crippled, then the video needs to be made public, to make the rest of them think…This scum hasn’t yet heard from Russians. I would teach him a lesson. PEOPLE, HELP ME FIND HIM!

As Index.hu reports, this tactic of forcing people who have somehow “offended” some aspect of the Russian state is one that is well entrenched in the political culture of Russia itself over the past few years. In particular, Ramzan Kadirov, the strongman ruler of Chechnya, is known for such actions; for example, when a Russian opposition party politician described Kadirov as “the shame of Russia” for the latter’s statement’s referring to opposition politicians as the enemies of Russia, an Olympic wrestler paid a visit to the politician. Following a “peaceful” discussion, the politician issued an apology to Kadirov.

It would seem that, in his own way, Magomed Dasajev has brought a taste of Russian politics to Hungary. What, if anything, happens next, remains to be seen.