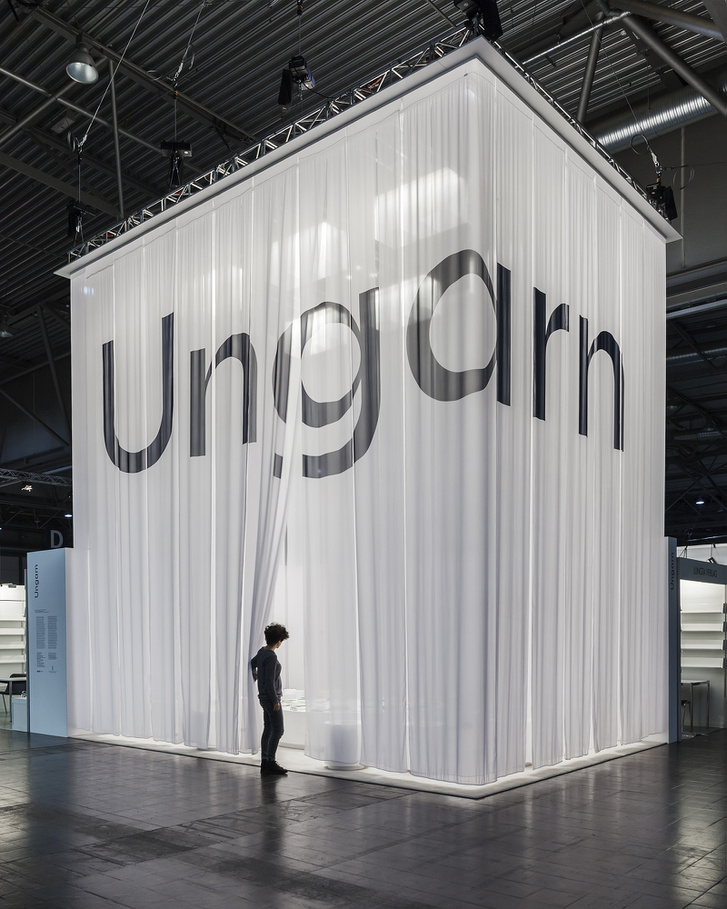 Every year, the most recent Hungarian books, translated to German are displayed in the exhibition space of the Leipzig Book Fair, Europe’s biggest book show. The conceptual basis for this year’s Hungarian pavilion, designed by the team of Hetedik Műterem’s fresh Ybl-prize-winner architects, Levente Szabó, Balázs Biri and Ákos Polgárdi, was defined by the approaching centenary of the Bauhaus.

The national pavilion is always focusing on a specific theme and each year, the designers commissioned by Collegium Hungaricum Berlin, try to shape the stand in an experimental way, reflecting on the unique situation presented by the book fair. The Hungarian Pavilion at this year’s Book Fair, held between 15-18 March, marked the 99th anniversary of the Bauhaus, one year before it is celebrated by the whole world on the official centenary, not by using direct, formal references, but rather in a more indirect manner while retaining the primary focus for visitors and the books on display. 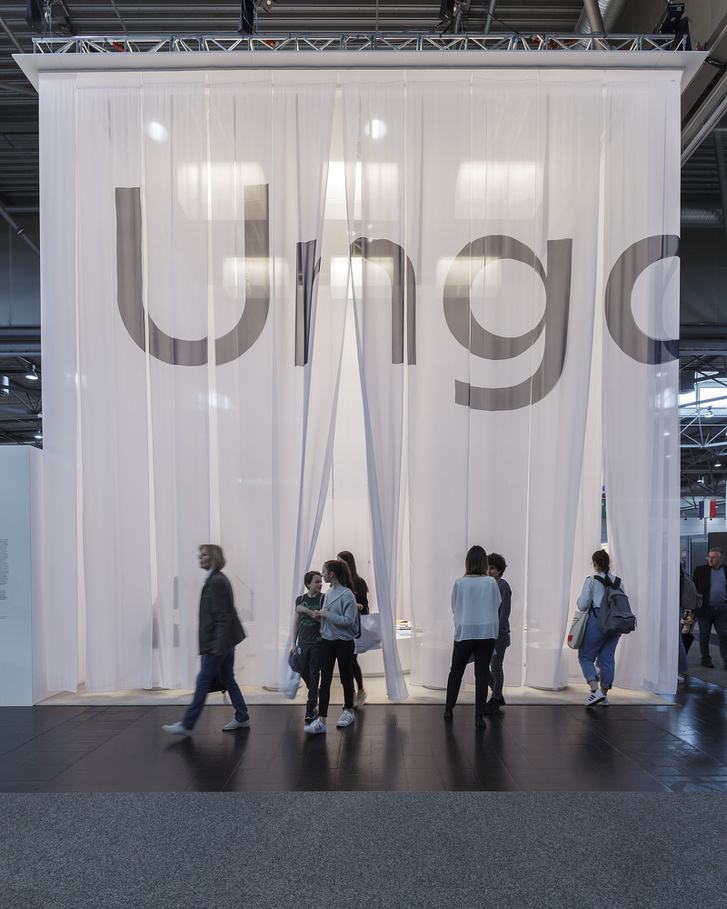 The designers applied the characteristic Bauhaus approach of the Gesamtkunstwerk to the Pavilion and defined a reading space with a unique and strong atmosphere, in the standardized and commercial context of the fair. They said they recommended the opposite of what is characteristic of usual trade fair situations.

The books were displayed on custom-made pieces of furniture in a space, surrounded by 7-meter high white, transparent curtains, covered with a light carpet, in a bespoke lighting concept. Apart from obvious connections to contemporary architecture, the inner spatial atmosphere was also inspired by examples directly connected to the Bauhaus, displaying the use of uncluttered, fluid spaces defined by textiles: a great example is Café Samt und Seide designed by Ludwig Mies van der Rohe and Lilly Reich, and built in 1927 in Berlin, serving as an exhibition pavilion for the German silk industry. 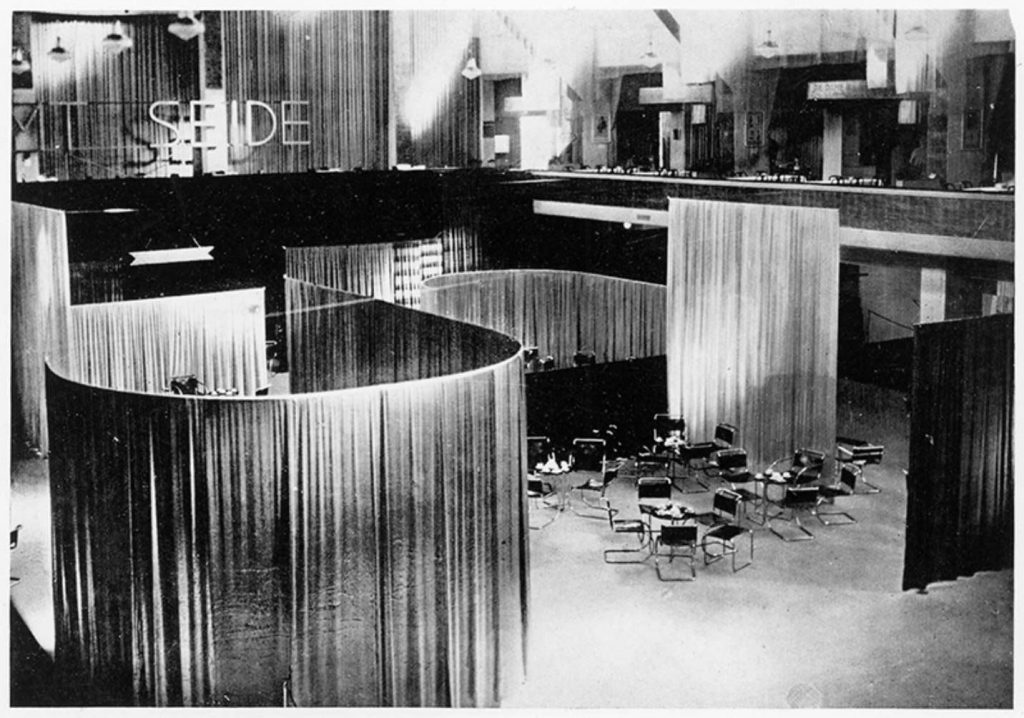 The uniqueness, lightness, constant movement, transparency and flexibility of the material used in this plan by Mies, who later served as director of the Bauhaus from 1930-1933, strengthens his paradigm-shifting theory of fluid spaces, which we tried to invoke in the exhibition space in Leipzig.

The presence and mutual interference of several art forms was as much a characteristic of the Bauhaus, as its elevating and intensive connection and interaction with the Hungarian art scene. The latter is emphasized by the quote from Walter Gropius, the motto of our design. In a heartfelt letter from 1925, the Bauhaus-founder urges one of the defining figures of the Hungarian Bauhaus to return to Dessau and participate in the art life of the school. 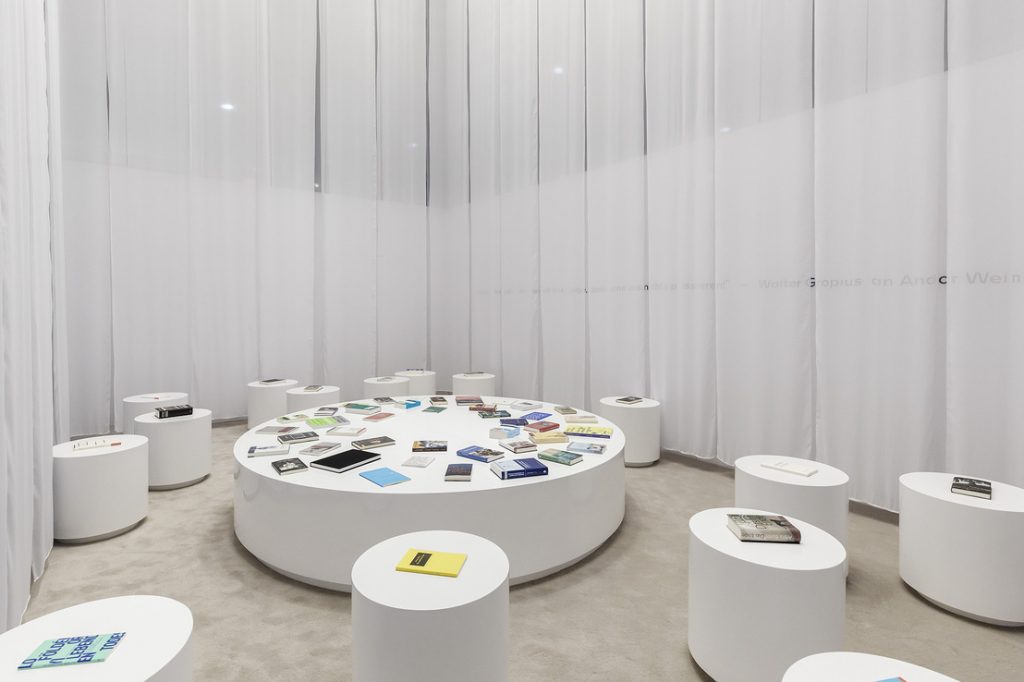 The curtain inside the space of the pavilion symbolizes the strong, symbiotic relationship between the international mainstream of the Bauhaus and its Hungarian adherents.

The typeface used throughout the stand on curtains, walls, furniture and flyers, is the Mohol type family of Ádám Katyi (the official typeface of the László Moholy-Nagy Design Grant), which reflects on Bauhaus experiments with basic geometric forms in a contemporary way, thereby connecting to the visual tradition established by László Moholy-Nagy, another significant Hungarian Bauhäusler. 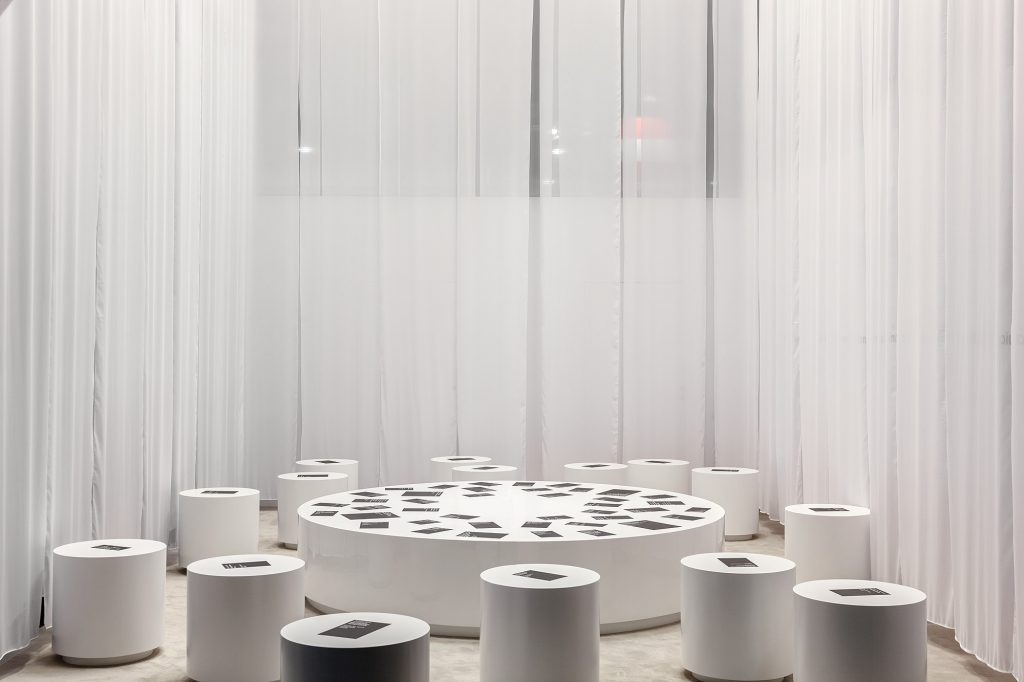 In addition to the material, tactile experience, the architectural definition of the space, or the custom-made furniture and typography, The Gesamtkunstwerk-like character of the pavilion was amplified by the recurring sounds of the Collegium Hungaricum Berlin Orchestra’s live musical performances. 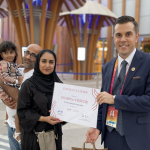 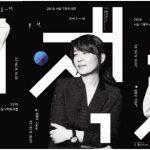